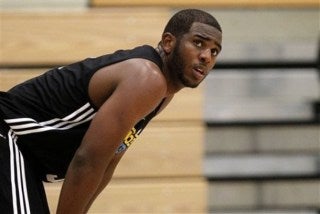 Clippers general manager Neil Olshey said the team balked at a proposed trade for Paul, saying “the cost was just too high.”

“Everything’s over until it’s reborn again,” Olshey said. “New Orleans made a fair offer on their end. We didn’t think that it was something that we wanted to pursue at this point.”

Olshey declined to identify whom the Clippers had offered in exchange for Paul but their package reportedly included center Chris Kaman, reserve guard Eric Bledsoe, forward Al-Farouq Aminu and their No. 1 pick in the 2012 NBA draft. Reports suggested the Hornets also wanted guard Eric Gordon included.

“There wasn’t one piece or another piece that killed this deal,” Olshey said. “The aggregate compensation that we were going to have to convey to them was just too much and it was going to hamstring our franchise in the long term.”

It’s the second time in five days that a deal moving Paul to Los Angeles fell apart. Last week, NBA Commissioner David Stern nixed a three-team trade by the league-owned Hornets, Los Angeles Lakers and Houston Rockets that would have sent Paul to the Lakers.

Billups averaged 16.8 points, 5.4 assists and 2.6 rebounds in 72 games with Denver and the Knicks last season. He was traded to New York in February. He helped lead Detroit to the 2004 championship and was the MVP of the NBA finals.

Olshey and coach Vinny Del Negro met with the team before practice Monday to tell them about the Hornets’ proposal and the $42.7 million, four-year offer sheet from the Golden State Warriors for DeAndre Jordan, a restricted free agent.

Later in the day, the Clippers re-signed Jordan and matched the Warriors’ offer sheet. The 23-year-old center appeared in a career-high 80 games last season, averaging 7.1 points, 7.2 rebounds and 1.78 blocks.

The Clippers also signed Caron Butler to a $24 million, three-year deal Friday, giving them a boost at small forward.