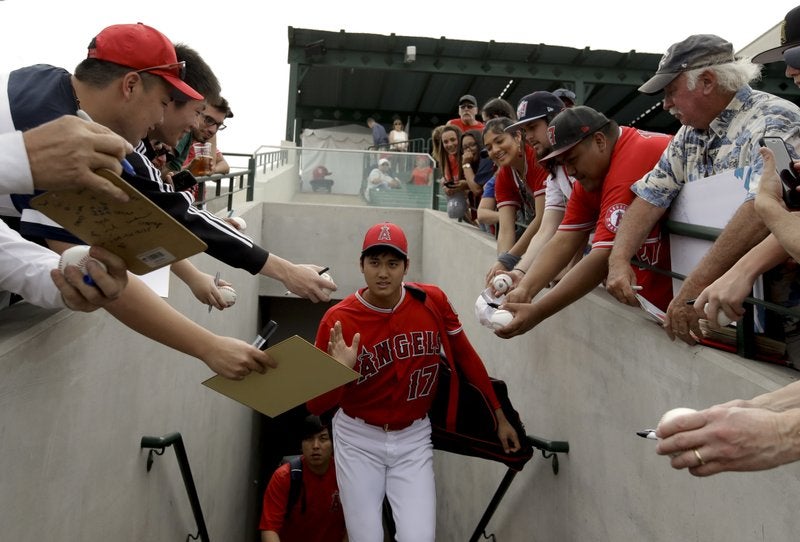 FILE – In this March 7, 2018, file photo, fans try for a autograph from Los Angeles Angels starting pitcher Shohei Ohtani, of Japan, before a spring baseball game against the Los Angeles Dodgers, in Tempe, Ariz. Ohtani is expected to start the season in the Angels’ specially designed six-man rotation. Los Angeles also plans to use Ohtani as its designated hitter for a couple of days in between his starts, providing ample opportunity for the 23-year-old phenom to adjust to the speed and quirks of the big-league game.(AP Photo/Chris Carlson, File)

ANAHEIM, Calif. — The Shohei Show is about to begin for the Los Angeles Angels.

Mike Trout might be the best player in baseball. Albert Pujols is its most accomplished active slugger. The Angels are loaded with veteran offensive talent around them, and their injury-plagued pitching staff is certainly intriguing.

Yet most of the attention in Anaheim this spring will be directed squarely at Shohei Ohtani, the Japanese sensation attempting to become the majors’ most accomplished two-way player in decades.

Ohtani is expected to start the season in the Angels’ specially designed six-man rotation. Los Angeles also plans to use Ohtani as its designated hitter for a couple of days in between his starts, providing ample opportunity for the 23-year-old phenom to adjust to the speed and quirks of the big-league game.

It’s an unprecedented undertaking, and the Angels realize they’ve got to do right by both Ohtani and the other 24 players on the roster during a landmark season for a franchise that still hasn’t won a playoff game with Trout and Pujols.

But even though the world is watching, the Angels actually aren’t worried about whether Ohtani is a hit right away. Ohtani is an extraordinary bargain after he chose to come to North America for modest wages, and the Angels see him as a long-term investment whose potential won’t diminish with a rocky start.

With a sharp offseason roster tuneup following manager Mike Scioscia’s first consecutive losing seasons, the Angels believe they’ve got the roster to contend for a playoff spot even if their eye-catching Japanese prospect isn’t an immediate sensation.

Here are more things to know about the Angels:

CATCH IT: The Angels should be one of the best defensive teams in baseball, with above-average fielders at almost every position. Shortstop Andrelton Simmons and catcher Martin Maldonado won Gold Gloves last season, while Kinsler and Calhoun are former winners — and Upton and Trout have been known to scale an outfield wall to steal homers. Scioscia’s Angels seem eminently capable of picking up victories with their gloves.

HEALTHY ARMS: The Angels’ six-man rotation is filled with pitchers attempting to come back strong from major injuries, including Garrett Richards, Tyler Skaggs, Andrew Heaney, Matt Shoemaker and Ohtani himself, who pitched in only five games and played in 65 last year in Japan due to a right ankle problem. The opening weeks of the season will be tense as the Angels wait to see whether health problems re-emerge for any of their starters.

BEST CASE: The Angels make the playoffs for only the second time in Trout’s career and contend for a World Series berth. Their stacked lineup performs to expectations, while Pujols remains healthy and fit enough to play first base regularly. Their starting rotation avoids any major injuries for the first time in several years. Ohtani is immediately dependable on the mound and at least competent at the plate, keeping Los Angeles out of an awkward situation. They get another spectacular season out of Trout, who finally gets postseason success as a reward for his formidable talent.

WORST CASE: A third straight losing season for the first time in Scioscia’s tenure. Injuries return to the starting rotation, again forcing the Angels to put together a patchwork group. Pujols gets out of shape or struggles at the plate, making his exorbitant contract feel even heavier. Upton and Kinsler fall prey to the hitting curse that has bedeviled several predecessors at their positions in Anaheim. Ohtani struggles to adapt to the big leagues on the mound and at the plate, forcing a trip to the minors to get his game together. The Ohtani experiment could go in innumerable ways — but it’s highly unlikely to be boring.