The attendees of the big dance are almost complete.

De La Salle, Ateneo, and Far Eastern University have all locked up the first three Final Four seats with National University needing just one more victory to secure its place in the semifinals.

Adamson University can still pull off a Cinderella run in its last two games, but will need NU to lose its last game to force a playoff for the No. 4 seed.

With the scenarios set, here are the seven best players for Week 9. If there’s an empty stat sheet, there’s a chance that Bernadeth Pons will do her best to fill that paper up.

Pons delivered a performance for the ages putting up 22 points, 23 excellent digs, and 24 excellent receptions, practiclly compiling a triple-double for the third-seeded Lady Tamaraws (8-4).

For reference, Pons’ defensive stats were higher than what the liberos of the two teams compiled. The Lady Spikers were the first to clinch a Final Four spot and the defending champions are now one step closer to solidifying a twice-to-beat advantage.

With a 10-2 record, La Salle ended the week on stable ground and needs one more win to take the twice-to-beat perk come the semifinals.

And one player who embodied that stability for the Lady Spikers was Kianna Dy.

Of Dy’s 12 points, eight came from spikes and she also did her dirty work on the defensive side with four blocks and six excellent digs. In a time where NU searched for a heroine, Jaja Santiago proudly donned the gold-and-navy cape and rescued the Lady Bulldogs from a potential disaster.

The Lady Bulldogs went 6-1 in the first round but suffered five straight losses in the second half of the tournament.

Downtrodden and in need of a win, Santiago willed her team to a three-set sweep of UE, 26-24, 26-24, 25-20, to snap their cold streak and assure themselves of at least a playoff for the last final four seat.

4. Diana Carlos (University of the Philippines, outside hitter) There was a time that these weekly rankings featured a “what if?” and that was a player who could’ve landed on a higher spot instead of falling down to the bottom four.

Well, this week had a “what if?” and that was UP’s Diana Carlos who has become quite unstoppable for the Lady Maroons in their past two games.

UP went 2-0 this week with shock wins over NU and Ateneo with Carlos scoring a total of 40 points for the two wins.

The Lady Maroons, however, saw their Final Four hopes get dashed after NU’s win over UE.

Carlos could’ve been higher on this list, even the no. 1 player, had UP got lucky and stayed in the Final Four conversation.

UP’s 4-9 record, however, won’t be enough to get it to the Final Four and Carlos had to settle for the fourth spot in the player rankings. Celine Domingo appeared on this list on just two occasions, and in those couple of instances there was always a narrative behind her inclusion.

Her first appearance on this list was when FEU beat UE, Domingo’s former school, in the first round.

Domingo’s second go around in this list also had a story as her performance against the Lady Falcons helped the Lady Tamaraws clinch the third Final Four spot this season.

In those five sets that FEU played Adamson, Domingo finished with 18 points and was an immovable force in the net as she tallied six blocks. Kat Tolentino was stellar for Ateneo in Week 8 when she averaged 19.5 points across two victories, and that momentum seemed to have trickled into Week 9 when the Lady Eagles split their two games at 1-1.

Although Ateneo lost in disappointing fashion against UP in its second game, the Lady Eagles’ performance, and also Tolentino’s play, against UST was noteworthy.

The Big Kat put up 21 points against UST to lead Ateneo to its ninth straight Final Four but her production dipped to 15 points in the loss to the Lady Maroons. 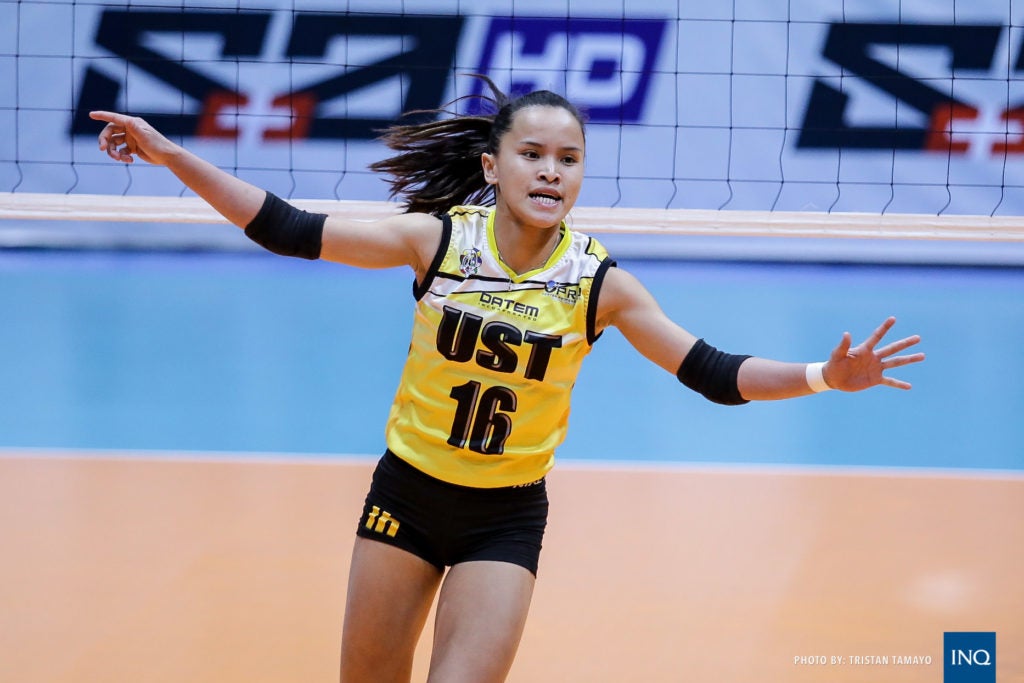 There isn’t much to go around UST’s performance in Season 80 as the Golden Tigresses failed to replicate their success from Season 79.

The Golden Tigresses were the belles of España when they snapped a five-year absence in the semifinals in 2017 but 2018 wasn’t that kind to them.

UST is officially out of the Final Four picture after it lost its two games this week dropping to a 4-9 record.

As a team, the Golden Tigresses don’t have much to show but a certain individual has captured the hearts and minds of volleyball enthusiasts.

Cherry Rondina has been UST’s lone saving grace this season as she practically put the Golden Tigresses on her back.

In the two games UST had this week, Rondina compiled a total of 44 points and that production pushed her lead in the scorers’ table further.

Rondina is the league’s top scorer with 281 total points, averaging 21.6 a game, 21 more than second placer Carlos who has 260 total points.