The guest list is full and the grand ballroom is finally open.

Defending champion De La Salle, Far Eastern University, Ateneo, and National University are all attending the big dance as the bright lights of the UAAP shine upon the four best teams of Season 80.

Before the Lady Spikers, Lady Tamaraws, Lady Eagles, and Lady Bulldogs head to the Final Four, they first had to go through rehearsals wherein the defending champions eagerly put on a preview of their grace and queenly poise.

The Lady Spikers were the belles of Week 10, and probably the whole ball, but it was a Lady Tamaraw who captured the last week of eliminations. 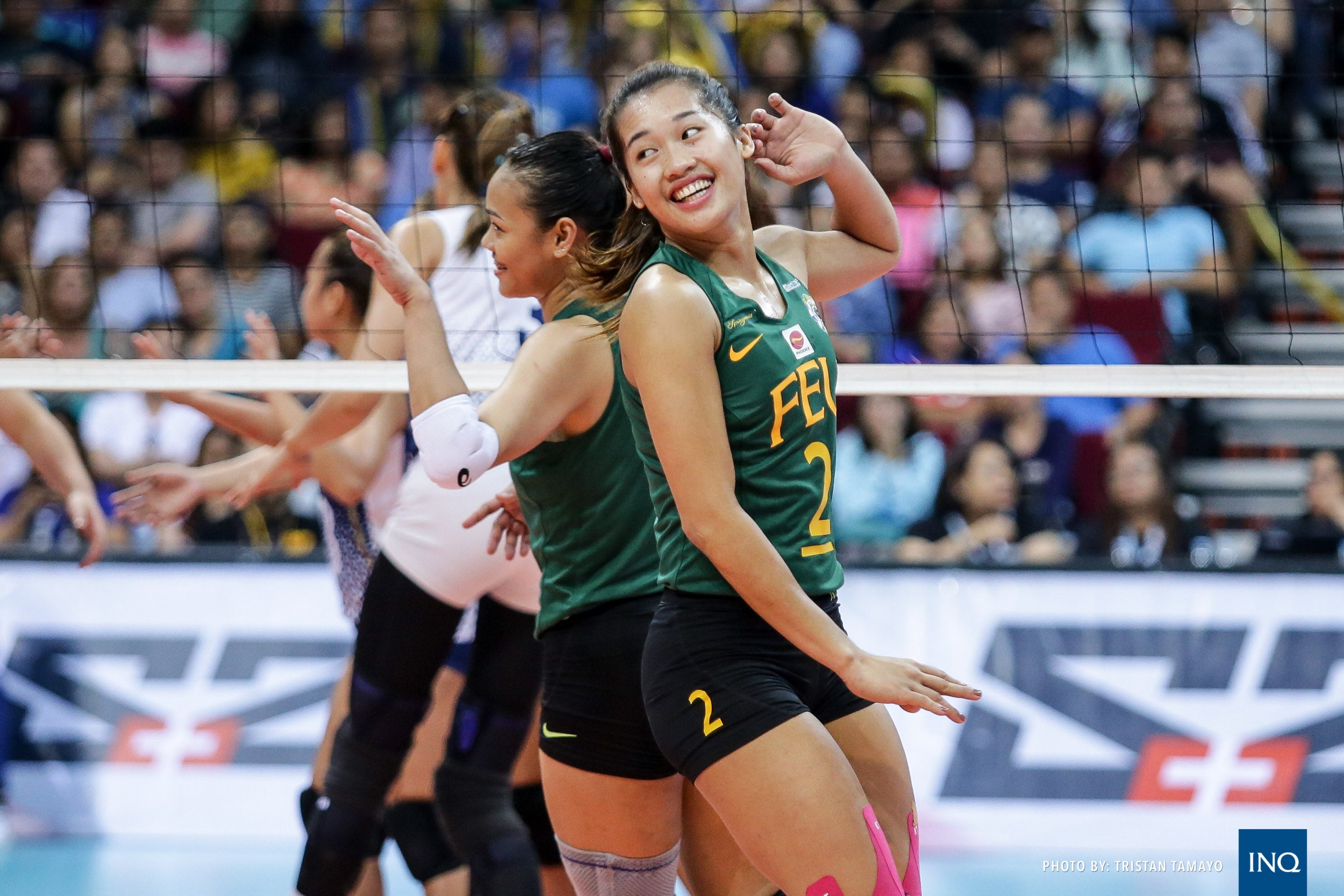 The Lady Tamaraws have been adamant that they want to get to the Final Four with a twice-to-beat advantage and no other embodied that desire than Bernadeth Pons.

FEU’s captain literally made her presence felt in the two matches the Lady Tamaraws played this week.

Pons recreated her efforts from last week, wherein she finished as the top player, to this when she once more made her presence felt in both the offensive and defensive ends.

Pons’ efforts helped the Lady Tamaraws end their elimination round campaign as the No. 2 seed with a 10-4 record and go to the Final Four with a twice-to-beat edge over Ateneo. 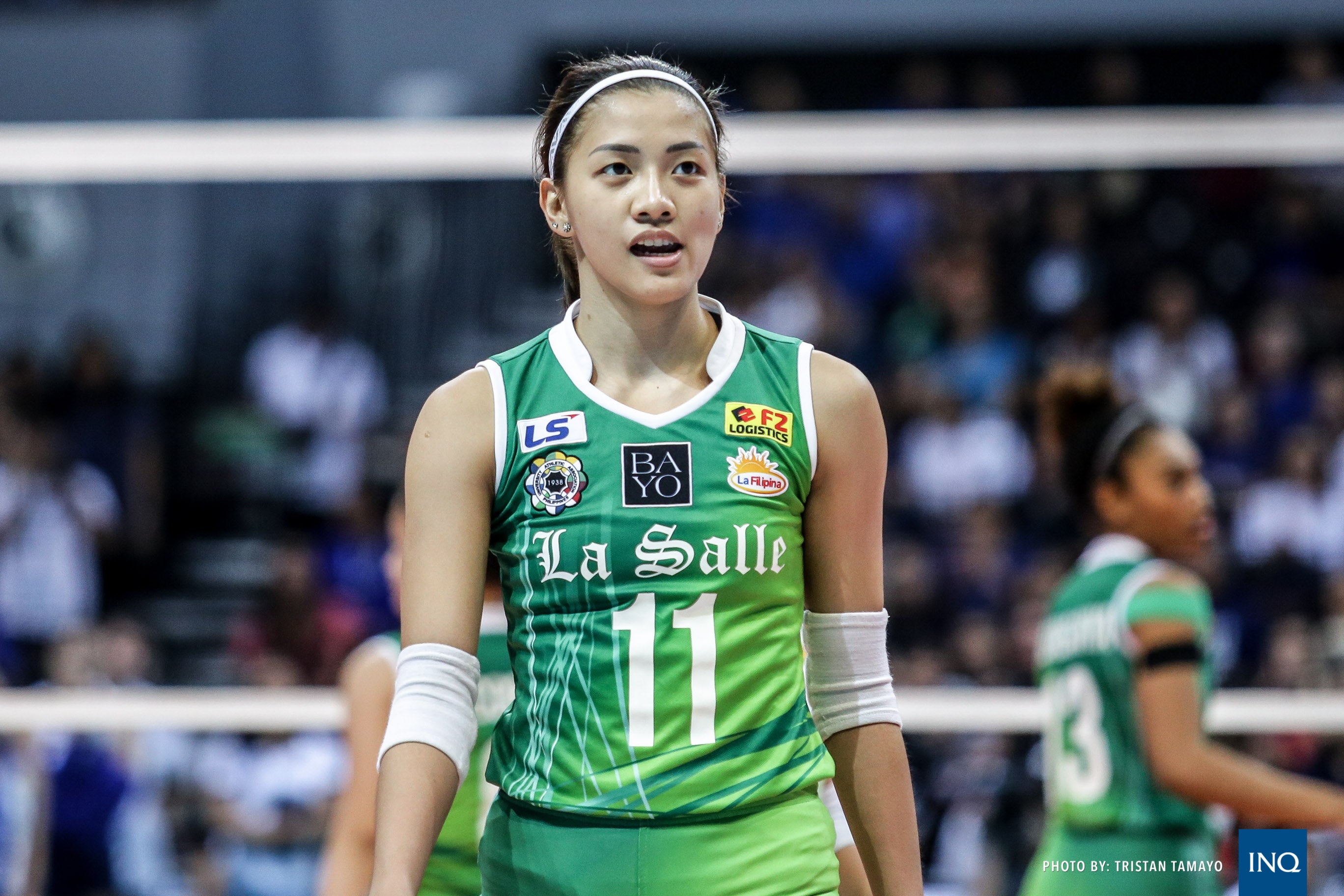 Kianna Dy may not have taken home a piece of individual hardware in Season 79 like her batch mate Mary Joy Baron, who won the MVP, but it cannot be argued that Season 78’s Finals MVP is La Salle’s most potent offensive weapon this year.

The graduating Dy was the picture of serenity for La Salle this week as the Lady Spikers played out, and won, their remaining two games on their schedule.

Dy averaged 15 points a game, the most by any La Sallian in Week 10, as she led the Lady Spikers to a 12-2 record at the end of the eliminations.

Her 13 points against the Lady Eagles in their final elimination game won’t do Dy justice on how potent she was in scoring, but her 17-point performance against Adamson does.

And she also held her own in the ground game as she tallied 10 excellent digs.

3. Isa Molde (University of the Philippines, outside hitter) 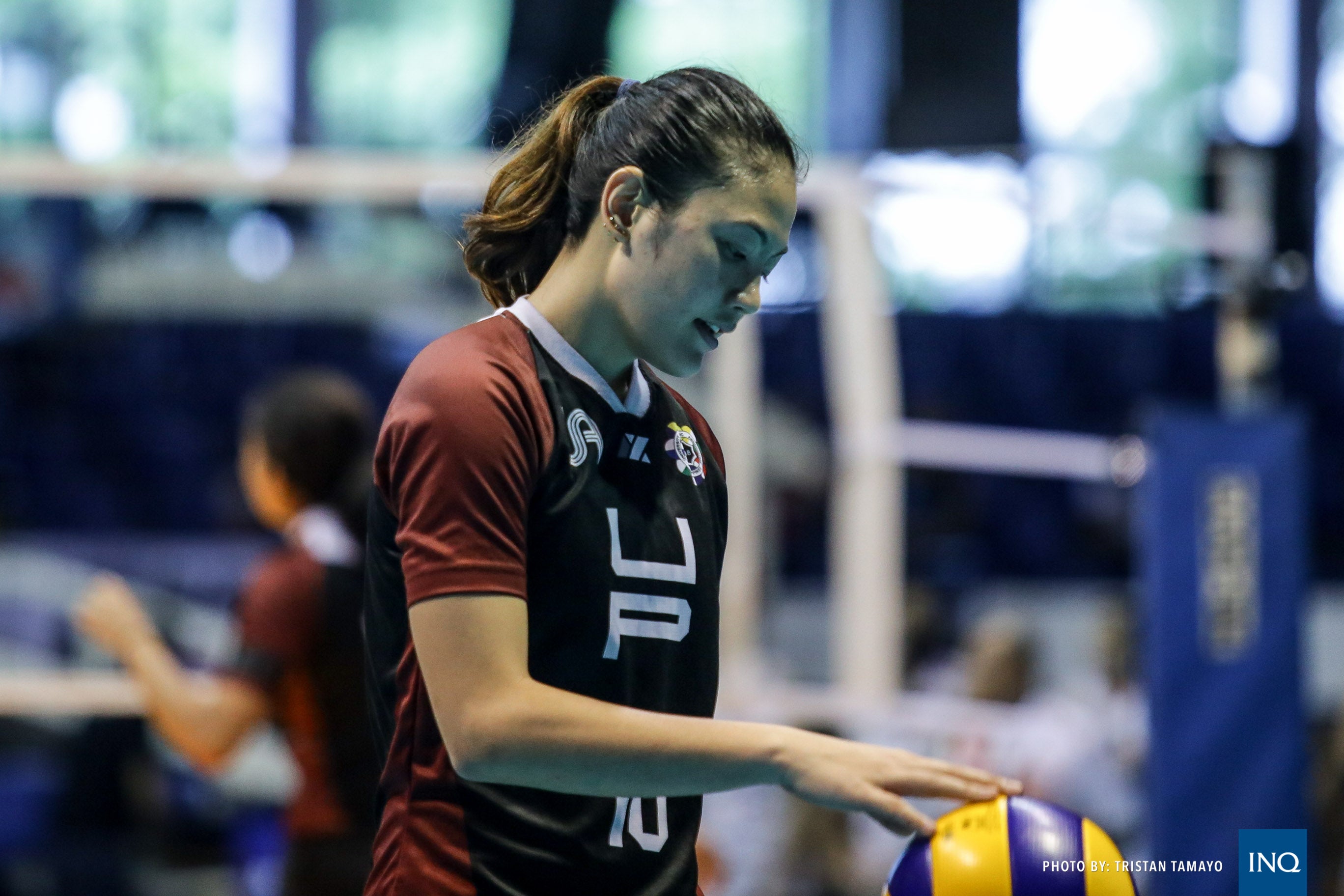 There are only two teams in Season 80 that have two players feature in the top 10 of the Best Scorers table, and those two are University of the Philippines and Ateneo.

The Lady Maroons, however, has the best scoring duo of any team in the league as Diana Carlos and Isa Molde hold the third and seventh seats, respectively, in the table.

Carlos and Molde combined for a total of 472 points in the eliminations, 84 more points than Ateneo’s Jhoana Maraguinot and Kat Tolentino.

And although it was Carlos who has become the more prominent scorer throughout the season, it was Molde who dominated for UP in its final game of the preliminaries against University of the East.

Molde was unstoppable for UP in the fourth set against the Lady Warriors, in a game the Lady Maroons won in four sets, when she scored five of her team’s last eight points.

The Season 78 Rookie of the Year eventually finished with 19 points while Carlos had 14. 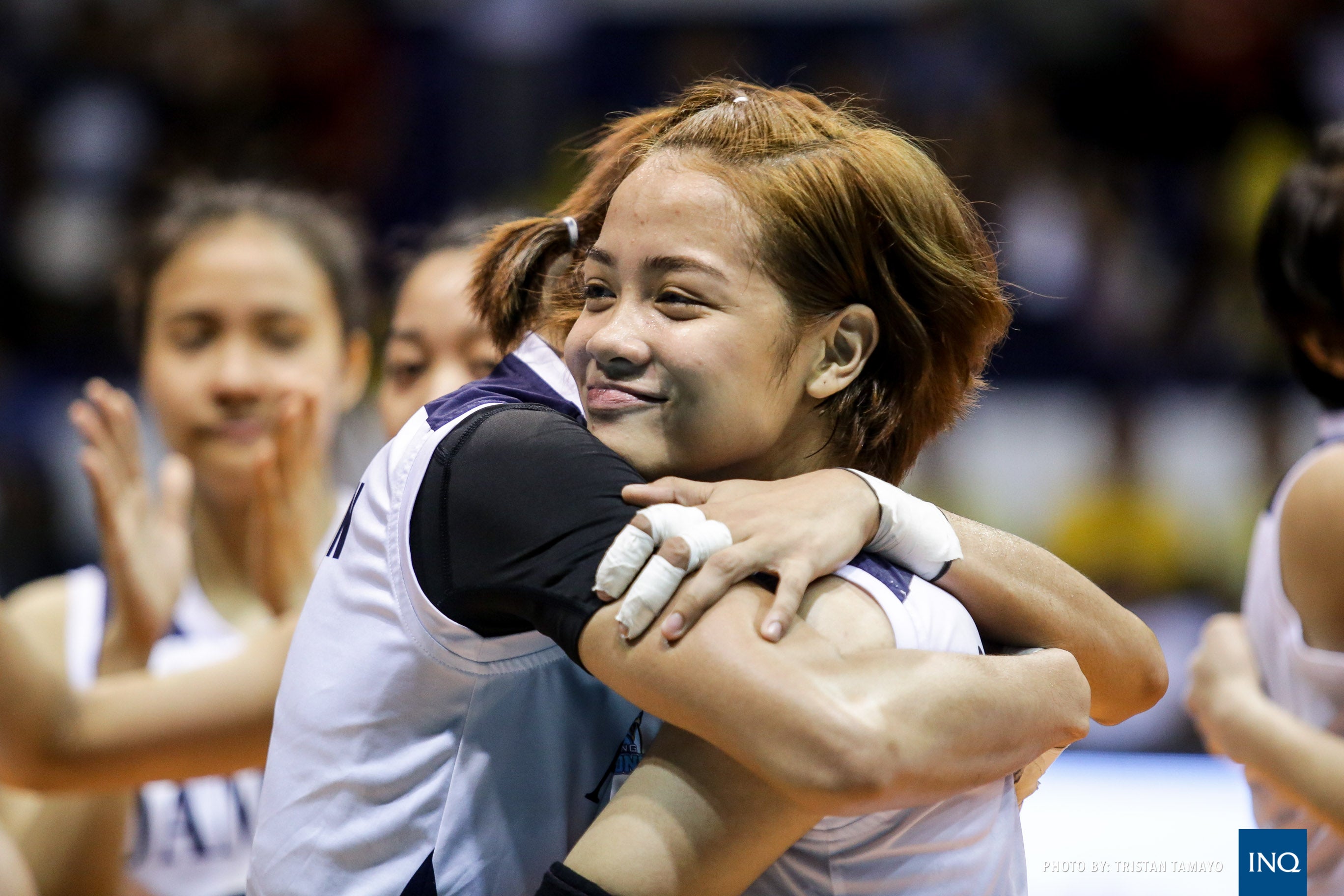 The angelic Jema Galanza has played her last two games in Adamson’s navy-and-white.

Those two games, even though one ended up in an Adamson win, were pure heartbreak for Galanza who faced the reality that she won’t be in the Final Four in her final year in the UAAP.

Galanza then, finished her career with a victory over University Santo Tomas, 25-6, 25-23, 25-23, wherein she finished with 12 points, the same offensive output she had against the Lady Spikers. Baron hasn’t been as potent offensively as Dy for Season 80, but the reigning MVP is undoubtedly someone who also possesses that royal elegance for the Lady Spikers.

La Salle’s middle blocker is in the 12th spot of the Best Scorers table as Baron put up a total of 171 total points while Dy is at eighth with 187.

Baron, of course, is not someone who will put up the numbers on any given day but what she does best is hold the fort for La Salle against any comers.

On Week 10, Baron averaged 10 points a game and she was an immovable presence for La Salle when the Lady Spikers faced Ateneo in the last game of Season 80’s elimination round.

Baron, who had nine points in their three-set sweep of Ateneo, finished with nine total points with four of those coming off blocks. Michelle Cobb has toyed with inconsistency for the better part of the season, but when it came to closing things out the sophomore setter delivered.

The heady playmaker was instrumental for the Lady Spikers as they closed out the eliminations with two straight wins, part of the eight-game winning streak, and she also did her dirty work on the defensive end.

Cobb averaged 28 excellent sets this week as she finished the eliminations at the third spot of the Best Settters list behind Ateneo’s Deanna Wong and NU’s Jasmine Nabor.

La Salle’s setter is also at the second spot of the Best Servers table behind teammate Desiree Cheng.

Against Ateneo, though, Cobb showed that she was more than a typical setter as she had seven points on four blocks and three aces on top of her 24 excellent sets. 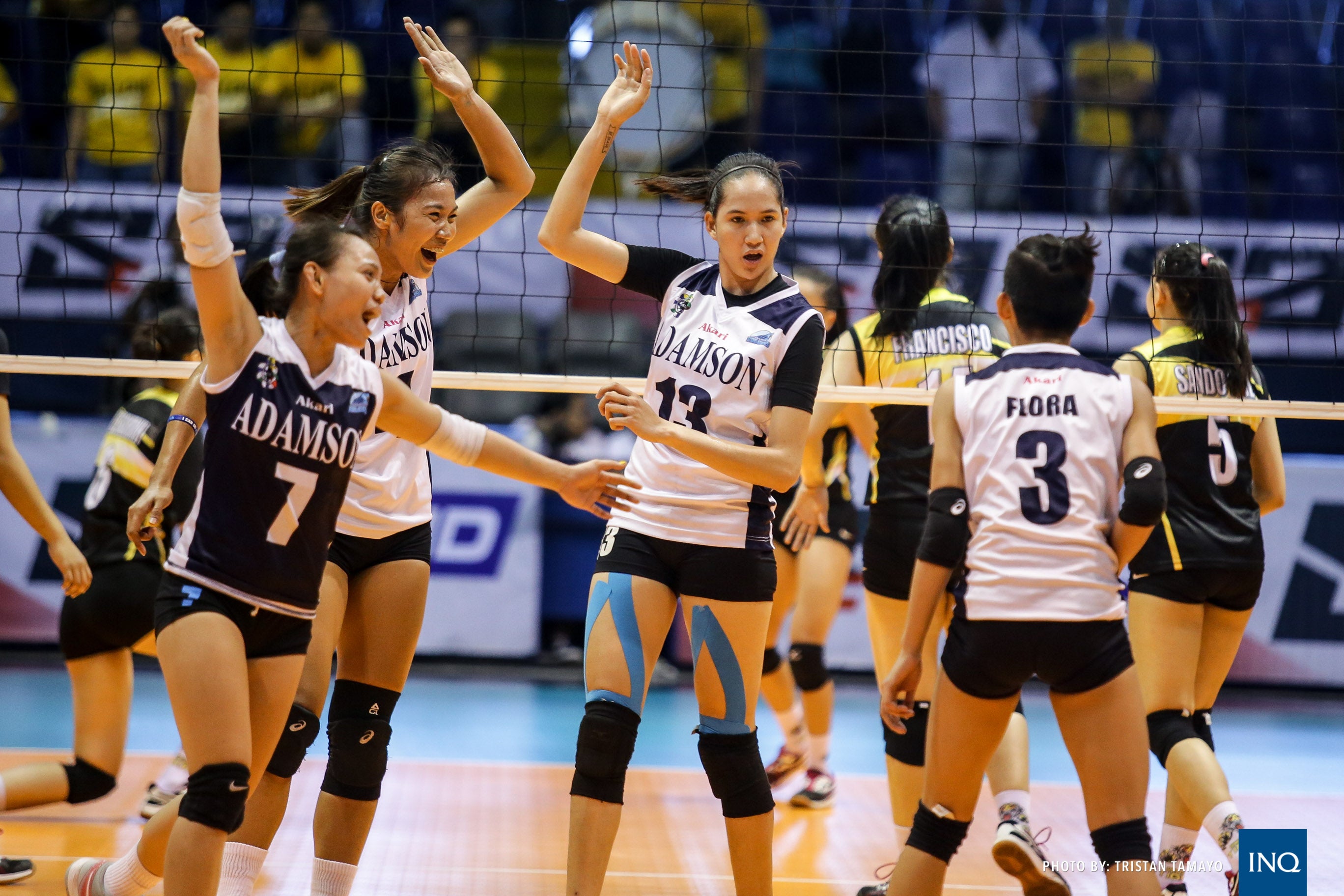 Adamson had four Lady Falcons play in their final two games in the UAAP this week and Eli Soyud made sure Galanza, Mylene Paat, Jellie Tempiatura, and Fhen Emnas would graduate with happy memories.

Soyud was the Lady Falcons’ top scorer for this week when she put up an average of 15.5 points in two games.

The first match ended in a loss for the Lady Falcons, but Soyud made sure the final one would be a victory for Adamson as she put up 14 points against the Golden Tigresses.