If the Lady Spikers went the methodical and dominant way to the first seed, the Lady Bulldogs got into the semifinals by the skin of their teeth.

The defending champion La Salle amassed a 12-2 record to become the no. 1 team after the eliminations while the Lady Bulldogs’ 7-7 record barely got them to the Final Four.

NU had the better record after the first round against La Salle, 6-1 to 5-2, but the second round became a different chapter altogether as the Lady Spikers won all seven of their second-half games while the Lady Bulldogs mustered just one.

And on Sunday, La Salle’s streak will be put to the test against an NU team that that got into the semifinals almost by luck. La Salle and NU were the polar opposites during Season 80.

On one hand, the Lady Spikers were practically unflappable during the whole tournament while the Lady Bulldogs only had the strength for one round.

After the Lady Bulldogs went on a 6-1 record in the first round, its best start in school history, the complete inverse happened as they won just one game in the second round and got into the Final Four after Adamson University and University of the Philippines dropped crucial games in the latter half of the tournament.

La Salle, for its part, went 4-2 in its first six games but eventually went on a rampant run that saw the Lady Spikers go on an eight-game winning streak to finish with a league-best 12-2 record. If numbers alone would be the basis of this matchup, NU is already on the losing side of things.

The Lady Spikers are the best serving and the fourth-best spiking team in the league and that is the defining distinction the defending champions have against the Lady Bulldogs.

NU, even before the start of the Final Four, already looks in trouble, as the Lady Bulldogs are the worst team in terms of digging and receiving.

La Salle averaged 2.72 aces a set throughout the eliminations and that would be deadly for the NU that has an efficiency rating of 22.49 percent, the worst in the league, in its receptions.

Making matters worse for the Lady Bulldogs, La Salle has the two best servers in the league in Desiree Cheng and Michelle Cobb who combine for more than an average of one ace per set.

Jaja against the world Jaja Santiago is undoubtedly one of the greatest offensive threats in all of UAAP.

The 6-foot-5 Lady Bulldog compiled a total of 280 points and averaged 20 a game the whole season to become the second leading scorer of the tournament.

Although Santiago has become an almost unstoppable force in front of the net, her supporting cast hasn’t made a mark.

The Lady Bulldog closest to Santiago in terms of scoring is Risa Sato whose 116 points didn’t even reach half of what the NU captain put up the whole season.

NU needs Sato, Roselyn Doria, and Aiko Urdas—whose combined total of 287 points is just seven points ahead of Santiago’s total—to pick up the slack for the Lady Bulldogs.

Kianna Dy, La Salle’s leading scorer for the season with an average of 13.36 points, perfectly said the Lady Bulldogs’ predicament.

“Jaja can’t do it alone, NU has to work as a team,” said Dy in Filipino. 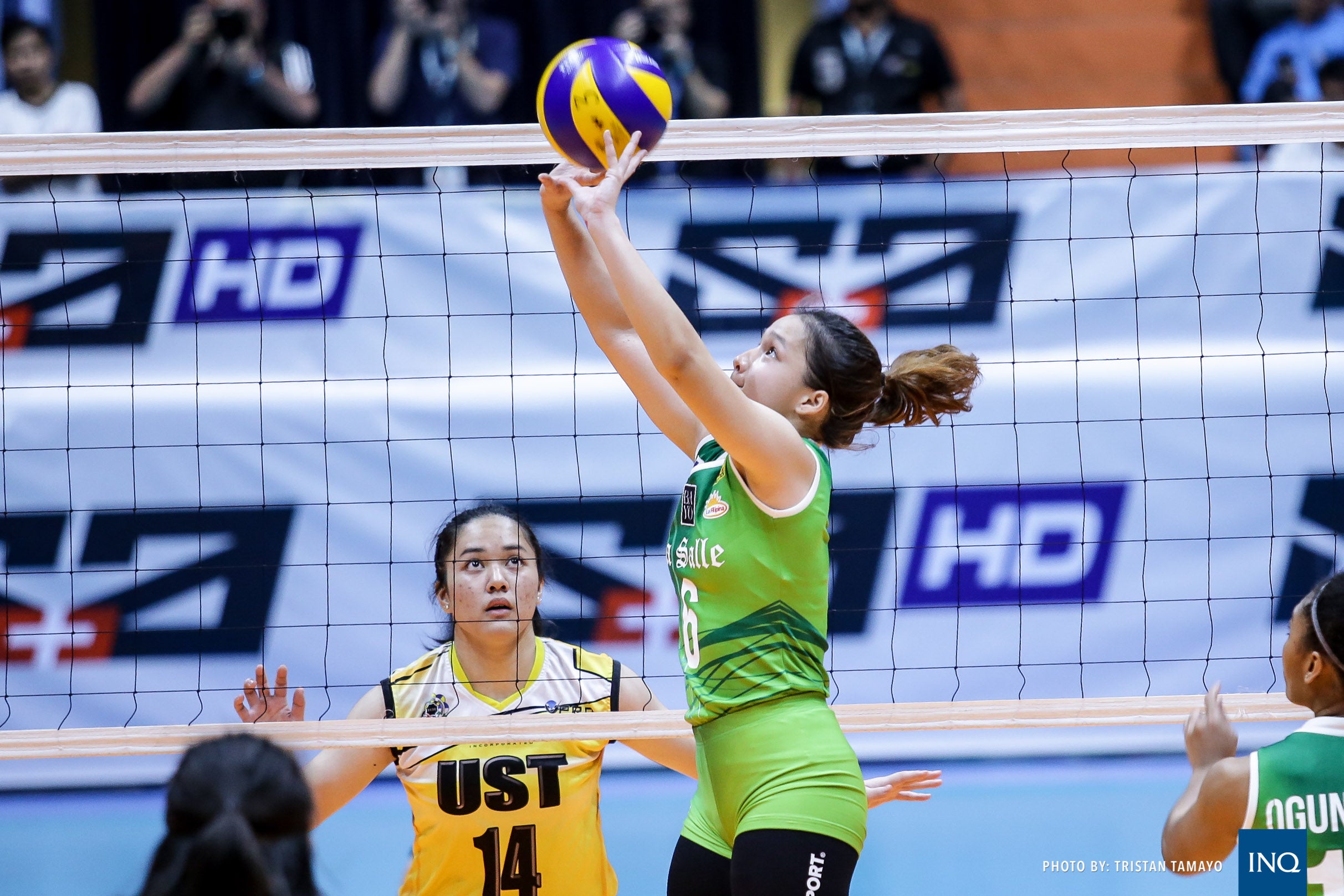 If there’s an individual matchup that would get a spotlight in this Final Four pairing, it would be the chess match between setters Jasmine Nabor and Michelle Cobb.

Nabor sits at the second spot in the Best Setters table, behind Ateneo’s Deanna Wong, while Cobb is at third.

The two setters aren’t that far apart in terms of production with Nabor putting up an average of 8.32 excellent sets per period while Cobb’s production is at 8.26.

Cobb and Nabor are both quality setters, but the defining factors would be the designated spikers.

Nabor has Santiago on her side as well as Sato, but a couple of consistent hitters won’t figure much against the Lady Spikers as Cobb has a plethora of spikers at her disposal.

If Nabor has two spikers on the top 25 of the Best Scorers table, Cobb has five.

La Salle may not have a volume scorer as Santiago, but what the defending champions have are multiple scoring options that have made them one of the most formidable teams in the league.