He The North: LeBron’s bank at buzzer downs Raptors 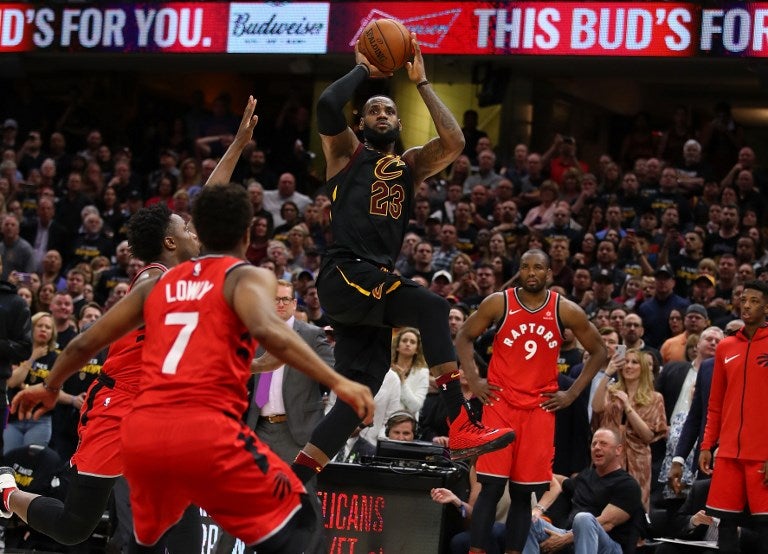 CLEVELAND, OH – MAY 05: LeBron James #23 of the Cleveland Cavaliers hits the game winning shot over the outstretched hand of OG Anunoby #3 of the Toronto Raptors to win Game Three of the Eastern Conference Semifinals 105-103 during the 2018 NBA Playoffs at Quicken Loans Arena on May 5, 2018 in Cleveland, Ohio. Gregory Shamus/Getty Images/AFP

CLEVELAND — LeBron James banked in a running one-hander at the buzzer, giving Cleveland a 105-103 win over Toronto on Saturday night in Game 3 and shoving the Raptors to the edge of their most devastating playoff exit.

After the Raptors tied it on rookie OG Anunoby’s 3-pointer with eight seconds left, James took the inbounds pass, dribbled the length of the floor and in one motion, dropped his 10-footer in front of Toronto’s stunned bench.

The Cavs ran and mobbed James and moments later he was back up on the scorer’s table — just like after a game-winner against Indiana last round — to celebrate a win that was up for grabs.

James finished with 38 points, Kevin Love added 21 and 16 rebounds and Kyle Korver 18 for the Cavs, who can sweep the Raptors for the second straight year.

Kyle Lowry scored 27 for Toronto, which clawed back in the fourth quarter with All-Star DeMar DeRozan on the bench.

After winning two games in Canada, the Cavs came home and won a brawl with the Raptors, who just can’t beat James. He’s 11-2 against Toronto in the past three postseasons.

The three-time champion has ended the Raptors’ past two seasons, and despite playing with a different supporting cast, James is one win from a Toronto trifecta.

Game 4 is Monday night, and the odds are stacked against the rattled Raptors. Of the 129 teams in NBA history to fall behind 3-0, none has come back to win.

This was supposed to be the Raptors season, the one that ended in triumph over James. Toronto had the East’s best record, the No. 1 seed, home-court advantage and a Cleveland team that appeared very beatable.

But the Cavs stole Game 1 by a point in overtime, and James scored 43 in a magnificent Game 2 performance.

He then delivered a series-and-season ending dagger with another moment that belongs with any in his remarkable career.

The first half ended in frustration for the Raptors with DeRozan, coach Dwane Casey and his assistants screaming at the officials following a sequence that went against them.

Serge Ibaka’s basket was originally counted and then waved off by the referees, and the reversal was doubly painful as Love buried a 3-pointer to put the Cavs ahead by 13. Jeff Green’s layup just before the horn made it 55-40 and an incensed Casey, his suit coat flying open and his tie jumping off his chest, stormed off the floor.

Desperate to find something, anything, to slow down the Cavs, Casey changed his starting lineup for Game 3. He inserted 6-foot guard Fred VanVleet and benched forward Serge Ibaka, going with a smaller lineup to push the pace.

However, Toronto started 2 of 11 from the field and the Raptors were quickly down 12 and seemingly in big trouble when DeRozan picked up his second foul and went to the bench.

Raptors: Casey has been criticized for some moves — and ones he hasn’t made — in the series. He’s also aware of the narrative that his team has been mentally defeated by James. “It’s not in my head,” he said. “It’s disappointing. It reminds me of back in the days of having to get over the hurdle of (Michael) Jordan. At some point you’ve got to get over that hurdle, you’ve got to knock it down, you’ve got to knock the wall down.” … Fell to 0-6 in playoff games in Cleveland, tying Atlanta for the worst postseason record by an opponent.

Cavaliers: Several Cleveland players watched the dramatic finish of the 76ers-Celtics game from their locker-room chairs before tip-off. … James moved past Tony Parker (226) for the fifth most games in postseason history. Derek Fisher (259) is the all-time leader followed by Tim Duncan (251), Robert Horry (244) and Kareem Abdul-Jabbar (237).