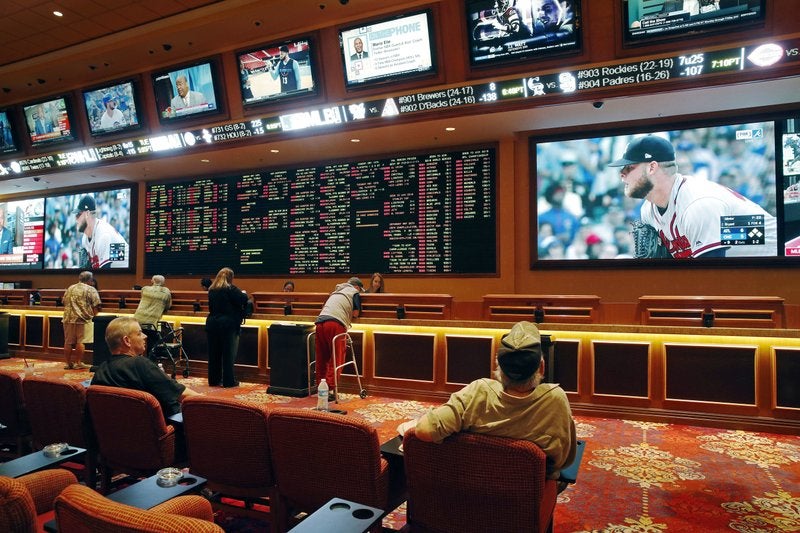 In this Monday, May 14, 2018 photo, people make bets in the sports book at the South Point hotel and casino in Las Vegas. Now that the U.S. Supreme Court has cleared the way for states to legalize sports betting, the race is on to see who will referee the multi-billion-dollar business expected to emerge from the decision. (AP Photo/John Locher)

ATLANTIC CITY, N.J. — Now that the U.S. Supreme Court has cleared the way for states to legalize sports betting, the race is on to see who will referee the multibillion-dollar business of gambling on pro and college games.

The NFL, NBA and others want Congress to set uniform, nationwide rules on sports gambling for all states, saying the integrity of athletics is at stake. And an influential Republican on Capitol Hill, Sen. Orrin Hatch of Utah, quickly announced plans to push for such legislation.

But states are already moving quickly to enact their own laws, with some legislators wanting fans to be able to place wagers by the time football season starts this fall. And there are serious doubts Congress wants to get involved.

“Sports are played on a national and sometimes international stage, crossing state borders and involving residents of numerous municipalities,” said Rummy Pandit, a gambling analyst with New Jersey’s Stockton University. “From that standpoint, federal regulation of sports betting makes sense. But the federal government has not historically been involved in the day-to-day regulation and oversight of gaming.”

For years the major sports leagues argued that gambling on games would lead to match-fixing and point-shaving. Now that they lost the court battle with Monday’s landmark ruling, many suspect that they are now pushing for federal legislation not for high-minded reasons, but because they see it as the easiest way to get a cut of the proceeds.

Negotiating a piece of the action with Congress would be more efficient than trying to work out deals one by one with dozens of states.

If it passed a nationwide bill, Congress could require casinos, tracks or state governments to share some of their revenue with the sports leagues — or pay them what the leagues like to call “integrity fees,” designed to cover the costs of policing betting.

The leagues have been making headway in negotiations on integrity fees with individual states, including Kansas, Connecticut, Indiana and New York, said Daniel Wallach, a sports law expert from Fort Lauderdale, Florida. The leagues also have come down on their fee demands in several states, lowering them from 1 percent to 0.25 percent, he said.

Wallach said the leagues, in seeking to be paid for sports betting, might also be able to make a compelling court case that they have intellectual property rights in the data that is used in wagering.

On the other side of the negotiating table, the gambling industry might want to work out a grand compromise on giving a cut to the sports leagues, rather than “battle it out, state to state to state, winning some, losing some,” Wallach said.

But state opposition remains strong. Within hours after the ruling, New Jersey lawmakers introduced a new bill to regulate sports betting that would drop the integrity fee that was in an earlier version.

In West Virginia, Republican Gov. Jim Justice allowed a sports betting bill to become law without his signature and later announced he had reached a deal for casinos to pay a fee to pro sports leagues. But casino operators denied there was a deal.

On Monday, the high court struck down a federal law that limited sports betting to four states that met a 1991 deadline to legalize it: Nevada, Delaware, Montana and Oregon. It came on a court challenge from New Jersey. As a result of the ruling, states are now free to adopt laws regulating sports betting.

Hours after the ruling, the NFL called on Congress to “enact a core regulatory framework” for legalized betting, citing “the potential harms posed by sports betting to the integrity of sporting contests and the public confidence in these events.”

The NFL reasoned, too, that it would be easier to comply with one nationwide set of regulations than with 20 or 30 individual ones.

The NBA likewise called for national regulation of sports betting.

Hatch, one of the authors of the federal law that was thrown out by the Supreme Court, sided with the leagues.

“The rapid rise of the internet means that sports betting across state lines is now just a click away,” he said. “We cannot allow this practice to proliferate amid uneven enforcement and a patchwork race to the regulatory bottom. At stake here is the very integrity of sports.”

It’s unclear how eager Hatch’s colleagues are to wade into this debate. Lawmakers are spending more time in their home states as election season heats up. The legislative calendar is winding down. And some lawmakers with libertarian views favor letting states deal with the issue.

David Schwartz, director of the Center for Gambling Studies at the University of Nevada-Las Vegas, predicted states will be reluctant to give up control over a potentially lucrative new source of tax revenue.

Sara Slane, a senior vice president at the American Gaming Association, said she believes Congress is going to have a hard time catching up with states that are moving quickly to legalize and regulate sports betting.

She said that many federal lawmakers already view sports betting as a states’ rights issue and that it will be difficult for Congress to roll back those efforts once betting operations are up and running.

“I do see this as somewhat dead in the water,” she said of federal legislation. “This is going to largely unfold on the state level.”

“I am deeply concerned about the social ills that can arise from gambling. At the same time, I have deep respect for the federalism principles that underlie today’s Supreme Court decision,” he said. He said his committee “will continue to examine the issue with an eye to striking the appropriate balance.”

Read Next
Tepper to buy Panthers for record $2.2 billion
EDITORS' PICK
House energy committee chair Arroyo bats for cheap electricity
The vivo Y02 is now available in the Philippines for only PHP 5,299
How not to retire as an ex-president
Shop smarter with vivo’s big 12.12 holiday deals
Lawmakers eyeing more changes in Maharlika plan
Hidilyn Diaz wins only gold missing from her collection
MOST READ
Jovit Baldivino, ‘Pilipinas Got Talent’ winner, dies at 29
Andi Eigenmann, family in Manila for a quick visit; Ellie dines with grandma Jaclyn Jose
LPA enters PAR, to likely strengthen into tropical depression in coming days – Pagasa
Lawmakers eyeing more changes in Maharlika plan
Don't miss out on the latest news and information.