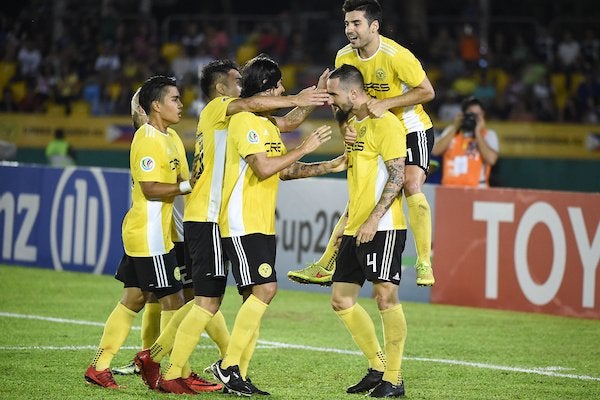 Despite a 2-3 loss to Yangon United in an ill-tempered second leg of their semifinal tie at Thuwunna Stadium here Wednesday night, the Busmen survived and prevailed on aggregate, 6-5, and stayed on course for a second straight Asean crown.

But victory came with a price as top scorer Bienvenido Maranon will miss the first leg of the final against Singapore after getting sent off following his goal celebration that Korean referee Ko Hyung-jin deemed as taunting.

The incident involving Maranon sparked a melee in the 78th minute with Ceres ahead, 2-1.

It also spurred the home side to salvage what was an already lost game, setting the stage for a gripping finish in front of close to 2,500 fans.

In the end, the 4-2 win at home last week at Panaad Stadium and Ceres midfielder Manny Ott’s crucial equalizer in the ninth minute here proved enough for the Busmen to survive the late onslaught by Yangon.

The Myanmar League leaders got off to a dream start when Kosuke Yamaazaki scored in the second minute, cutting the deficit, 3-4, on aggregate.

But Ott combined with Stephan Schrock to pull Ceres level, before Maranon finally gave the Busmen the lead with a smart finish 12 minutes from time.

The goal looked to have sealed the win for Ceres, but Maranon celebrated in front of Thein Zaw, who took offense.