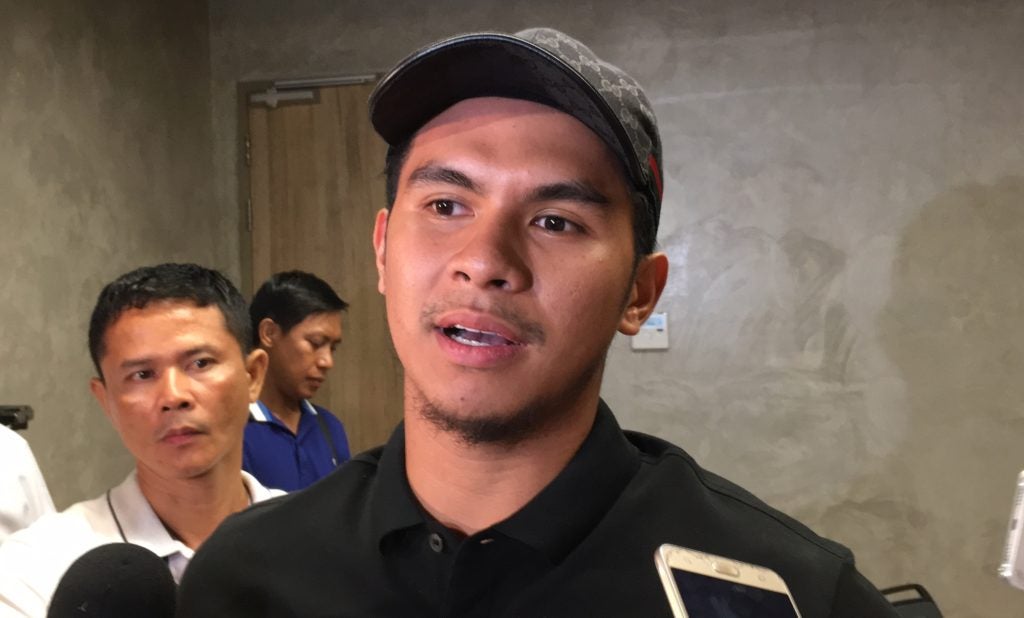 An apologetic Kiefer Ravena speaks to the media during a press conference. Ravena has been suspended by Fiba for 18 months after testing positive for prohibited substances he got from a pre-workout drink. Photo by Mark Giongco/INQUIRER.net

Kiefer Ravena, one of the country’s brightest young stars, has been suspended by Fiba after he tested positive for banned substances in the World Anti-Doping Agency (WADA) List, the Samahang Basketbol ng Pilipinas announced on Monday.

Ravena will be ineligible from Fiba competition from Feb. 25, 2018, which was the date he was subjected to a random drug testing during Gilas Pilipinas’ home game against Japan, to Aug. 24, 2019, a sanction that could also keep him from suiting up for the NLEX Road Warriors in the PBA during the time period.

SBP president Al Panlilio said they received formal communication from Fiba on May 22 that Ravena tested positive for three ingredients Dimethylbutylamine, Methylexaneamine and Higenamine that fall in the WADA List of prohibited substances.

“You are responsible for whatever you take into your system, into your body so why would I blame anybody for influencing me? It’s a pre-workout drink and I didn’t know the components of the said drink,” Ravena told reporters.

The 24-year-old Ravena was supposed to play in the Visayas leg of the PBA All-Star Week on Sunday in his hometown of Iloilo, but was a late scratch after he was requested by the SBP to fly back to Manila for what was then due to an undisclosed reason.

The absence of Ravena is a big blow to Gilas’ campaign in the Fiba World Cup Asian qualifiers.

The Philippines is currently 3-1 but it gets tougher with a road game against rival Chinese Taipei next month before hosting heavyweight Australia at Philippine Arena on July 2.

Read Next
Kobe: Enjoy LeBron James’ quest
EDITORS' PICK
Geek out at TOYCON 2022 powered by Smart Signature
Unemployment rate up to 6% in May
High-risk pregnancy: Reducing your risk is in your hands
UK’s Boris Johnson will resign, BBC reports
High inflation: Your P1 is now worth only 87 centavos
House energy committee chair Arroyo bats for cheap electricity
MOST READ
Suspect in grisly killing of missing woman in Bulacan arrested
Hong Kong suspends flight bans as it eases COVID-19 rules
Kim Atienza’s daughter flaunts bikini body in response to critics of her ‘revealing photos’
Cop slain in Isabela ambush
Don't miss out on the latest news and information.