How Asian countries are ranked by Fifa this 2018 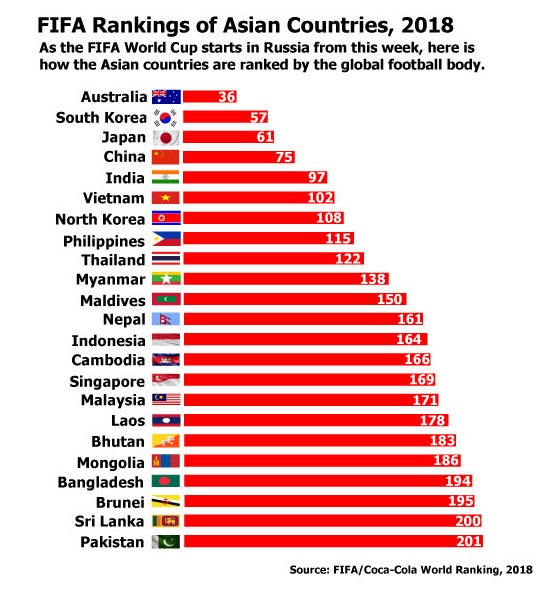 The Fifa World Cup begins tomorrow, June 14, and countries across the world are gearing up for it. Only three Asian countries – Australia, South Korea and Japan have qualified to compete for the world’s most coveted trophy in football.

On the global ranking, Australia is the only country from Asia that figures in the top 50.  Australian team named Socceroos is ranked 36. The Socceroos are in Group C with France, Peru and Denmark.

Japan is ranked 67 and will be making its sixth appearance in this year’s World Cup. It is one of the most successful Asian teams having qualified for the World Cup for last six consecutive years. It is in Group H with Poland, Senegal and Colombia.

Indonesia under the name of Dutch East Indies national football qualified for the World Cup in 1938 and since then has never been able to qualify. It is ranked 164 and is followed by Cambodia and Singapore ranked 166 and 169 respectively.

Malaysia’s best standing in Fifa was the ranking of 1993 when it was at 75th position. Currently the country is ranked 171 followed by Laos and Bhutan ranked 178 and 183 respectively. Bangladesh and Sri Lanka are ranked very low at 194 and 200 respectively.

Pakistan is lowest ranked Asian team at 203rd position out of 211 teams in the world rankings.