Brazil held to 1-1 draw by Switzerland at World Cup 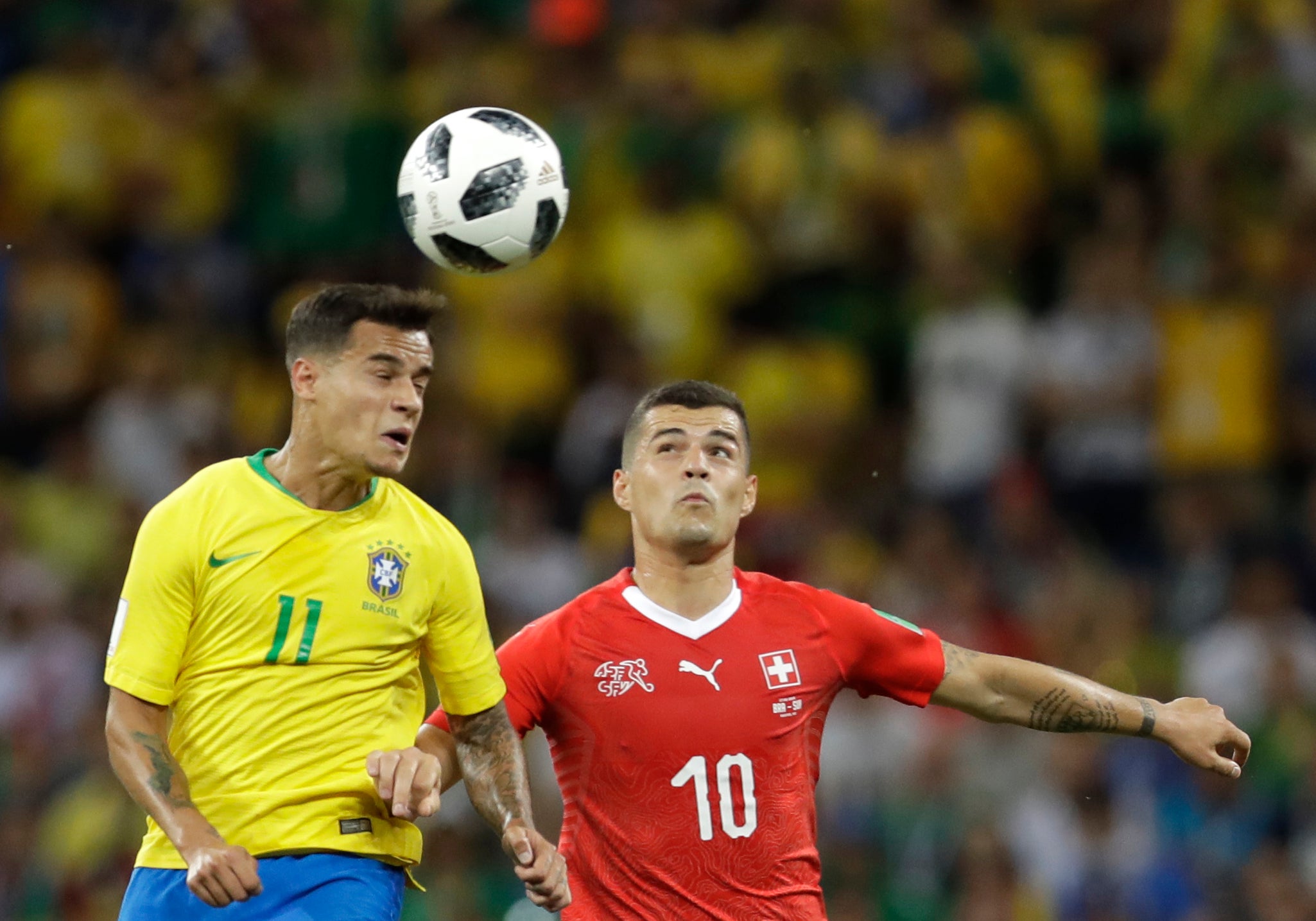 Brazil’s Philippe Coutinho, left, and Switzerland’s Granit Xhaka jump for the ball during the group E match between Brazil and Switzerland at the 2018 soccer World Cup in the Rostov Arena in Rostov-on-Don, Russia, Sunday, June 17, 2018. (AP Photo/Themba Hadebe)

ROSTOV-ON-DON, Russia — Brazil joined the list of big teams struggling to win their opening matches at the World Cup in Russia.

The five-time champions were held to a 1-1 draw by Switzerland on Sunday, a few hours after four-time champion Germany was beaten by Mexico 1-0.

Philippe Coutinho, who was making his World Cup debut, gave Brazil the lead in the 20th minute with a volley that bounced in off the right post. Steven Zuber then headed in the equalizer in the 50th. Mexican referee Cesar Ramos dismissed complaints that Zuber had shoved defender Miranda before getting to the corner from Xherdan Shaqiri.

“I was pushed out of the way. There is video of what happened and the referee could have seen it. But it didn’t happen,” Miranda said. “We got a draw but this is only the beginning for us. We knew this game wasn’t going to be easy.”

Ramos also ignored a penalty claim late in the second half when Gabriel Jesus was wrestled to the ground by Switzerland defender Manuel Akanji.

Swiss players ended up with three yellow cards, and 10 of the 14 fouls they committed were on Brazil forward Neymar.

Switzerland coach Vladimir Petkovic described the incident against Miranda as an “ordinary challenge.” He also dismissed charges that Neymar had been treated harshly.

“Of course, neutralizing Neymar was a key ingredient of our game,” he added.

Switzerland dominated the midfield for long spells against a Brazil team that had been keen to start with a win after its disastrous exit as host in 2014.

“I am proud of their determination,” Petkovic said of his team. “The first 40 minutes were tough for us, and at halftime I told the players to stay cool and press forward. They did, and it worked.”

Coutinho had another chance to put Brazil in the lead but he sent the ball wide in the 67th minute.

“I’m very glad to score but what was important was our effort to win and what we did as a team is what counts,” Coutinho said. “We had some great moments and positive moments. Now we need to think about the next match.”

Brazil has won 17 of its 22 matches since Tite took over as coach in 2016. But they couldn’t get another one in front of a very Brazil-friendly crowd at the Rostov Arena.

Besides Brazil and Germany, Argentina was held to a 1-1 draw by Iceland on Saturday, and Spain and Portugal played to a 3-3 draw on Friday.

Tite said he wouldn’t make excuses for the disappointing scoreline.

“What happened with Miranda was clear, but it doesn’t explain the result,” Tite said. “There was a lot of pressure and anxiety on the players and that translated into the finishes that were not precise. We had 20 finishes but we should have make the goalkeeper work harder.

“But of course I’m not happy with the result and of course I wanted to win tonight.”

The Brazilians remain haunted by their 7-1 loss to Germany in the 2014 World Cup semifinals that was followed by a 3-0 defeat against the Netherlands in the third-place playoff.

Brazil will next face Costa Rica on Friday in St. Petersburg, while Switzerland faces Serbia in Kaliningrad on the same day. Serbia leads Group E after its 1-0 victory over Costa Rica.

Petkovic said it was time the world took notice of his team, which is sixth in the FIFA rankings and won nine of its 10 qualifying matches to reach its fourth straight World Cup.

“I’m not surprised with the result,” the Bosnian said. “Sometimes there is a lack of recognition (in Switzerland’s ability) and I think that’s a pity because this team really believes in itself and can achieve results.

“Against a difficult and strong opponent you need to be realistic and sometimes you play passes without thinking too much but I think the team has shown great determination and true spirit.”

Tite said he was happy with his team’s play until Switzerland scored.

“The goal, the aggressiveness, the creative plays, it was characteristic of our team,” Tite said. “And then the opposition grew stronger and we were not advancing enough. We were not blocking enough.”