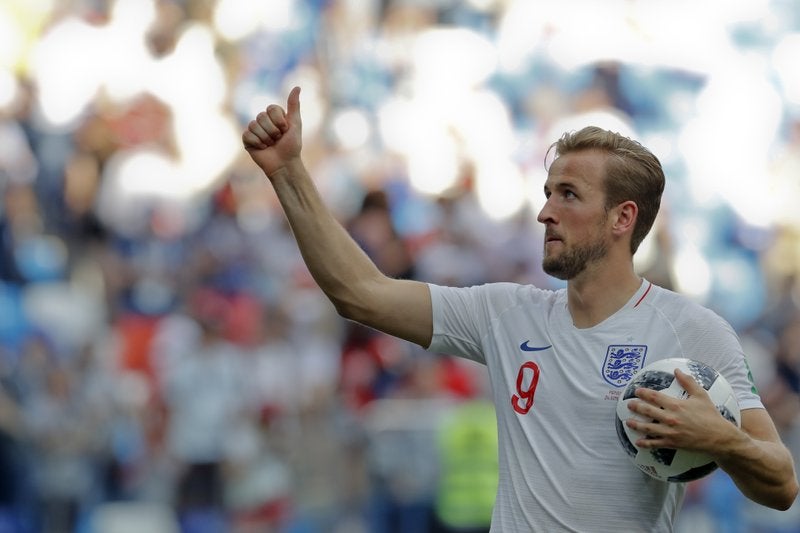 England’s Harry Kane celebrates his team’s 6-1 victory at the end of the group G match between England and Panama at the 2018 soccer World Cup at the Nizhny Novgorod Stadium in Nizhny Novgorod , Russia, Sunday, June 24, 2018. (AP Photo/Antonio Calanni)

The England striker grabbed the game ball and kept it in his grasp after scoring a hat trick in his team’s 6-1 win over Panama on Sunday.

Those goals — two penalties and a lucky deflection — made Kane the third Englishman after Geoff Hurst and Gary Lineker to score a hat trick in a World Cup match.

“One to be proud of,” Kane said. “Not many players get to score a hat trick in a World Cup.”

The third goal was “probably one of the luckiest ones of my career,” he said. It came when a shot from teammate Ruben Loftus-Cheek deflected off his heel and wrong-footed Panama goalkeeper Jaime Penedo.

The other two were penalties, but it didn’t matter that his goals weren’t vintage. It was enough to put England into the round of 16 with a match to spare.

Kane now has a tournament-leading five goals at the World Cup, one more than Cristiano Ronaldo and Romelu Lukaku.

“You’ve got some of the best players in the world doing well, scoring goals, so it’s nice to be up there,” Kane said. “But for me it’s just about the wins. The most important thing is that my goals help my team win. I just hope to continue it.”

Kane took advantage of an overly-physical Panama team to score twice from the spot in the first half. The first penalty came when Jesse Lingard was fouled. Kane won the second himself.

He converted both penalties convincingly.

“You can dismiss penalties as being easy, but the length of time you have to wait before taking it, and the number of distractions to keep focused and start again, it tells you a bit about the mental toughness that he’s got,” England coach Gareth Southgate said. “He’s there. He’s up at the top. We wouldn’t swap him for anyone. We know when he gets opportunities he’s going to bury them.”

Hurst, who got his hat trick in England’s 4-2 victory over West Germany in the 1966 World Cup final, also had that ability. As did Lineker, who scored three against Poland at the 1986 tournament.

Like them, Kane was expected to lead England’s attack. But defender John Stones wasn’t.

The big center back contributed two goals with a pair of headers. That gives him more World Cup goals than he has in 122 games in the Premier League, where he has scored only once.

But, as Stones swiftly reminded everyone, he did score twice in a Champions League game last year.

He said his cellphone was “blowing up” with messages after his goals. But he’s more concerned with Kane’s tally and his chance to beat Ronaldo and others to the Golden Boot for the tournament’s top scorer.