South Korea’s players celebrate a goal during the group F match between South Korea and Germany, at the 2018 soccer World Cup in the Kazan Arena in Kazan, Russia, Wednesday, June 27, 2018. (AP Photo/Lee Jin-man)

KAZAN, Russia  — Germany is out of the World Cup, the fourth defending champion in the last five tournaments to be eliminated in the group stage.

The four-time champions lost to South Korea 2-0 Wednesday, allowing a pair of injury-time goals while knowing a 1-0 victory would have been enough to advance because of the result in the other group match.

Germany ended up last in Group F while Sweden and Mexico advanced to the round of 16. South Korea was also eliminated despite the victory.

It was the first time Germany has been eliminated in the first round since 1938.

Kim Young-gwon scored the first goal in the third minute of injury time. Originally called out for offside, the goal was then given after video review. 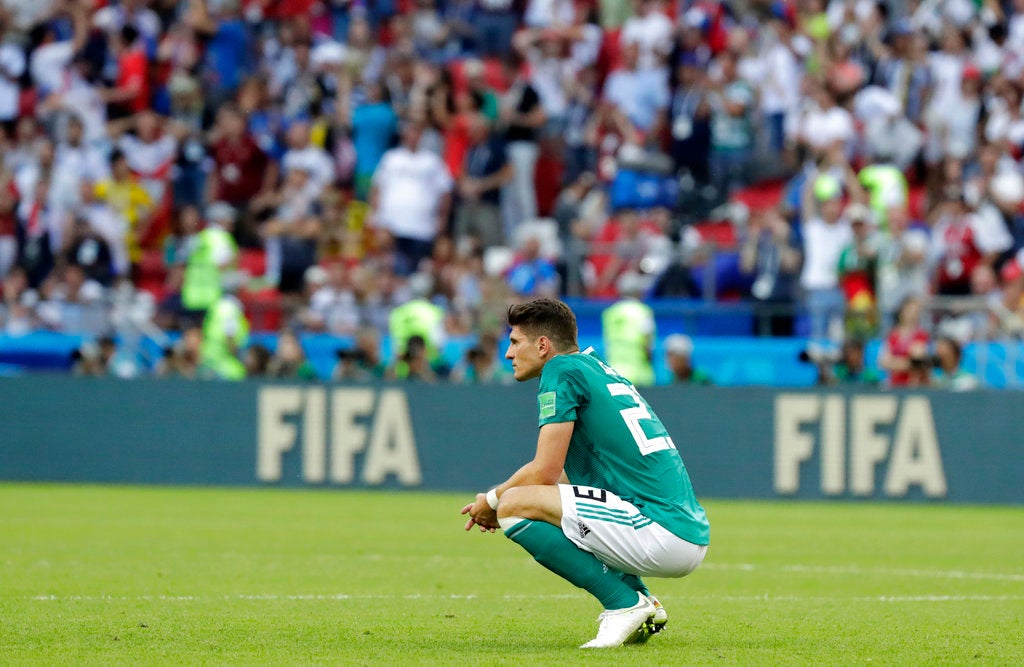 Germany’s Mario Gomez on the pitch after the group F match between South Korea and Germany, at the 2018 soccer World Cup in the Kazan Arena in Kazan, Russia, Wednesday, June 27, 2018. (AP Photo/Lee Jin-man)

Son Heung-min made it 2-0 in the sixth minute of injury time after Germany goalkeeper Manuel Neuer came up the field to help his teammates outside the South Korea box. Son tapped the ball into an empty net after a long pass from Ju Se-jong.

Besides Germany this year, France in 2002, Italy in 2010 and Spain in 2014 were the previous defending champions to get eliminated in the group stage.