Ten players and two coaches from Gilas Pilipinas have been suspended by Fiba for their role in the brawl between the Philippines and Australia during the Fiba World Cup Asian Qualifiers last July 2 at Philippine Arena.

Calvin Abueva received the heftiest sanction of all as he is banned for six games with Fiba factoring in “prior behavior  in a Fiba competition,” while Roger Pogoy, Carl Cruz, and Jio Jalalon were slapped with five-game bans. 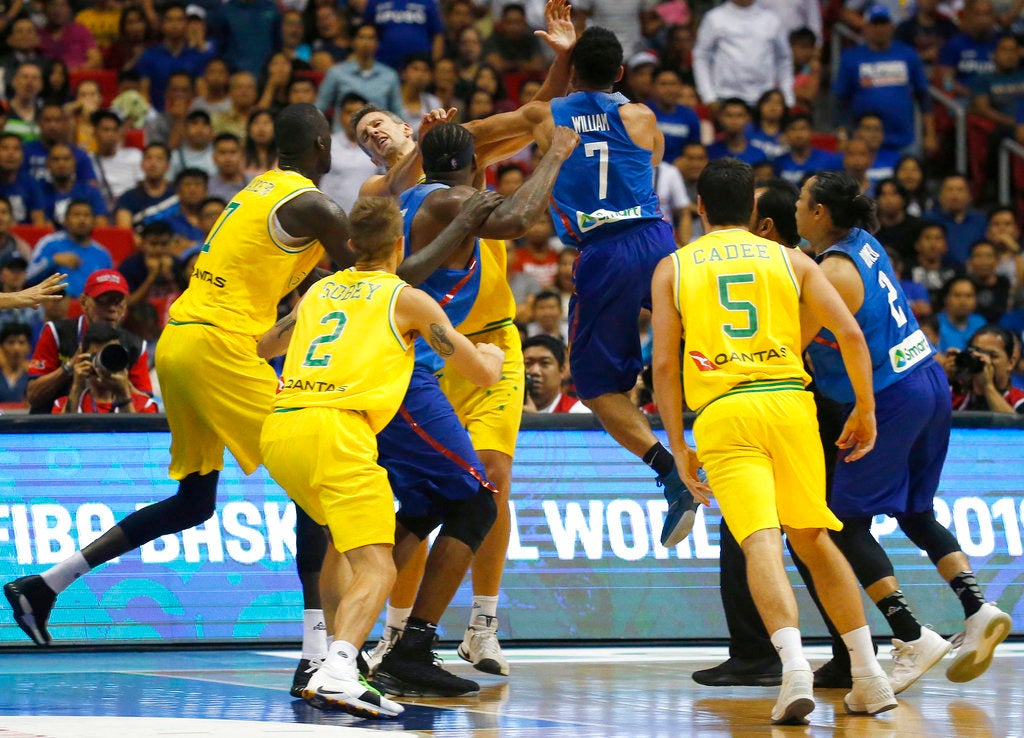 In this July 2, 2018, file photo, Philippines’ Jason William (7) jumps to hit Australia’s Daniel Kickert, center left, as others rush to break a brawl during the FIBA World Cup qualifying basketball game at the Philippine Arena in suburban Bocaue township, Bulacan province, north of Manila, Philippines. Kickert was given a five-match ban for unsportsmanlike behavior by international body FIBA on Thursday, July 19, 2018, for his part in a brawl during an Asian qualifier against the Philippines for the 2019 World Cup. (AP Photo/Bullit Marquez, File)

Assistant Coach Joseph Uichico, meanwhile, is suspended for three games while Chot Reyes is out for one game and fined CHF 10,000 (P534,834) for “inciting unsportsmanlike behavior.”

Samahang Basketbol ng Pilipinas also has to pay a whopping CHF 250,000 (P13,373,002) disciplinary fine for “the unsportsmanlike behavior of its delegation members and of its public, as well as for insufficient organization of the game.”

As part of the sanction, Gilas Pilipinas’ next home game must be played behind closed doors and two more home games have been placed under a three-year probationary period.

READ: Gilas runs out of players, loses to Australia in ugly, bizzare game

The world governing body announced its decision on Thursday following a thorough review of the ugly incident.

Basketball Australia, the country’s governing body, has to cough up CHF 100,000 (P5,349,200) “for the unsportsmanlike behavior of its players and for abusing and/or tampering of equipment, after having removed floor stickers from the court on the eve of the game.”

The bans only apply to the games in the Fiba World Cup 2019 Qualifiers and don’t extend to the PBA and the NBL, the national league in Australia.

The referees who worked game did not escape Fiba’s punishment. They were removed from the FIBA Elite Program and have been banned from participating in any Fiba-sanctioned international competitions for one year.