Spieth’s title defense at British Open ends without a bang 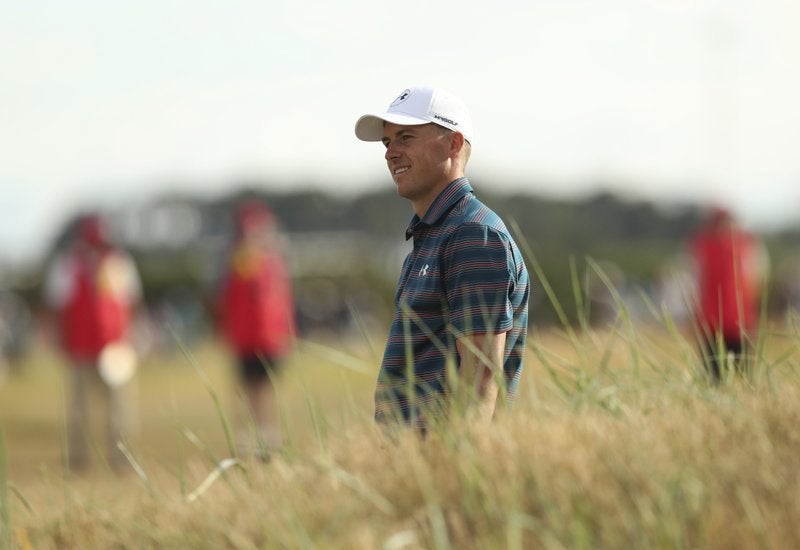 Jordan Spieth of the US during the final round of the British Open Golf Championship in Carnoustie, Scotland, Sunday July 22, 2018. (AP Photo/Jon Super)

CARNOUSTIE, Scotland — Defending champion Jordan Spieth wasn’t the only one struggling to gain traction on the wind-swept final day at Carnoustie.

But he was one of just two in the 79-player field who failed to make birdie, shooting 76 and sliding from a three-way tie atop the leaderboard at 9 under at the start into a tie for ninth by the end. A bogey, double-bogey run at Nos. 5 and 6 let a handful of contenders squeeze past Spieth, who owns three major championships, and bogeys at two of the last four holes killed his chance of catching up.

“I didn’t play the wind the right way on those two holes,” he added. “I was trying to fight it instead of accepting that the wind is going to win out here.”

Sung Kang shared the dubious honor of carding a birdie-free round.

Spieth, who turns 25 next week, knew fighting the wind would take patience. The Texan felt he passed that test.

“You knew you’d have three, four good looks at birdies, and the rest of the holes, you were just going to try to position it to make par. I knew that going in,” he said. “I played patiently. Never got down on myself. Never got angry.”

More importantly, Spieth’s putting stroke restored his confidence, which should extend through the rest of the bag.

“My game is back. I’ve had different parts … being at kind of a low point in my career. Not all at the same time, but enough to where I haven’t really been able to compete. It’s all there, and it’s moving in the right direction,” he said. “So I’m actually very pleased coming out of this week.”

Eddie Pepperell shot the low round on the final day and held the clubhouse lead until fellow Englishman Justin Rose swiped it.

Not one to look back, Pepperell said he didn’t waste time wondering what might have been.

“I was a little hung over. I won’t lie. I had too much to drink last night,” he said after shooting 67 and finishing in a three-way tie for sixth. “I was so frustrated yesterday (after shooting 71) that today was really, I wouldn’t say a write-off, but I didn’t feel I was in the golf tournament.

Padraig Harrington’s 2007 win at Carnoustie marked the last time the British Open champion made double-bogey in the final round and recovered in time to hoist the claret jug.

Doubles waylaid a handful of contenders on Sunday, including Kevin Kisner and Xander Schauffele, who shared the lead with Jordan Spieth at 9 under to start the day. Schauffele got back on track with a birdie at No. 14 to pull into a tie with eventual winner Francesco Molinari on the 16th tee, but he fell away by making bogey on the next hole. Kisner and Kevin Chappell both had makeable birdie putts to catch Molinari on the 16th, but both missed and wound tied for second and sixth place.

Sam Locke got a hero’s welcome on his stroll up to the 18th green. Small wonder.

The 19-year-old carried the flag for his native Scotland, being the only Scot and the sole amateur to make the cut and play into the weekend in his first major. He was awarded the silver medal as low amateur, a victory for both Locke and his mentor, Paul Lawrie, whose 1999 win at Carnoustie was the last by a Scotsman at the British Open.

Locke acknowledged he’d “have to sit and have a think” about what to do next, including whether to turn pro. He planned on trying to make the British side for next year’s Walker Cup, a prestigious amateur event, but that could change.

“With my family and Paul … we’ll all sit down and have a chat … he’ll obviously have some great advice and put me on the right path.”

Edoardo Molinari, who plays on the European Tour, hardly knew what to say.

“I can’t find the words right now, but one picture would do it…” he tweeted in both English and Italian, attaching a picture of little brother Francesco pumping his fist after winning the British Open.

“You’re extraordinary … The example for all of us,” countryman Matteo Mannassero tweeted , adding the Italian flag icon. “Thank you.”

For all that, Francesco Molinari wasn’t sure he’d top the newspapers and broadcasts back home.

“It depends,” he laughed, noting that the Formula One race at Hockenheim, Germany, would be bigger news if the Ferrari racing team finished on top. “If they won, they’ll probably get the headlines.”