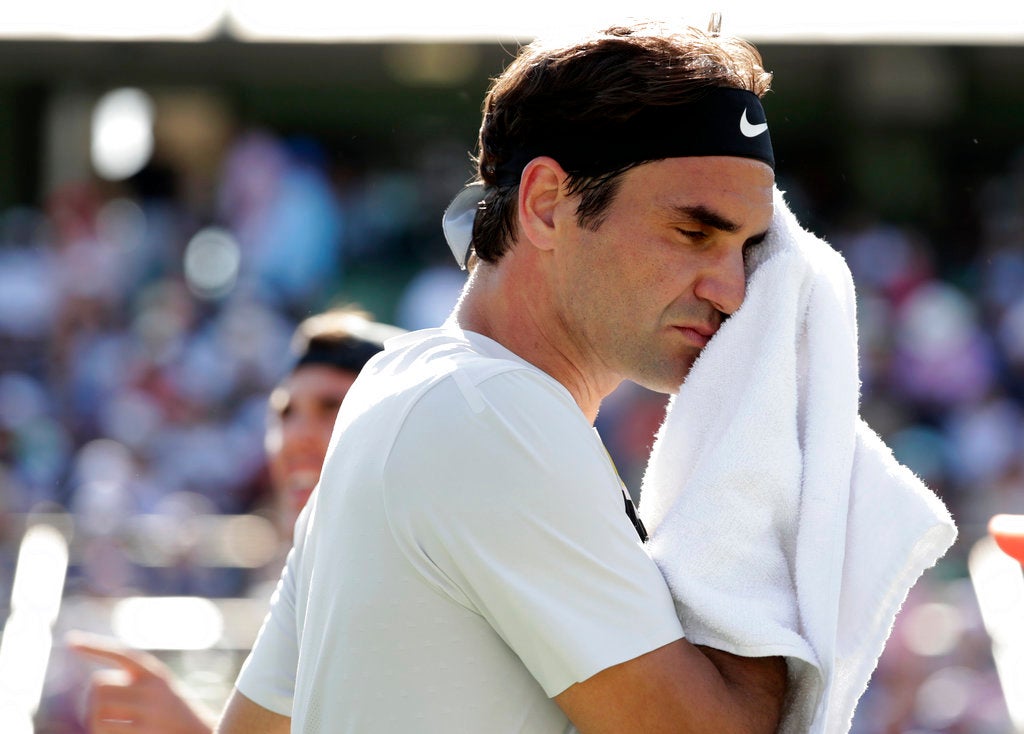 Roger Federer, of Switzerland, wipes his face during his match against Thanasi Kokkinakis, of Australia, at the Miami Open tennis tournament, Saturday, March 24, 2018, in Key Biscayne, Fla. (AP Photo/Lynne Sladky)

NEW YORK — Even with all the times Roger Federer held the U.S. Open trophy, he still can’t forget the time it slipped through his fingers.

He had won five titles in a row in Flushing Meadows and was a game away from a sixth in 2009 when Juan Martin del Potro pulled out a fourth-set tiebreaker, then won the fifth set.

“I still wish I could have played that match again,” Federer said Friday.

He’s never been that close to winning the U.S. Open since, just once even reaching the final.

That would have been hard to imagine then, when Federer would steamroll into New York at the tail end of some of the greatest seasons in tennis history. He was 247-15 from 2004-06, and knew he’d figure things out across seven matches on the hard courts in a city where he is so comfortable.

“For a long period I think I was not losing much,” Federer said, “and when I came to the Open, I had all the answers for all the guys, all my opponents, all conditions, wind, you know, night, day. I really embraced everything about New York.”

Still does, which is why — at age 37, and a full decade removed from his last title at the place — Federer believes he can succeed again at the year’s final Grand Slam tournament and collect a male-record 21st major when main-draw play begins Monday. A sixth U.S. Open title would break a tie with Jimmy Connors and Pete Sampras for the most in the professional era.

Novak Djokovic just beat Federer in the final in Cincinnati, and the Wimbledon champion might be the favorite in New York. Defending champion Rafael Nadal is the top seed after taking back the No. 1 ranking that Federer had regained earlier this season for the first time in five years, and del Potro is up to a career-best No. 3 in the world and proved again he could handle Federer at the U.S. Open when he stopped him last year in the quarterfinals.

Yet few would count out No. 2 seed Federer, even as erratic as his gifted game looked against Djokovic on Sunday in Ohio.

“If you are playing well before, is easier to play well in the Grand Slam, no? No doubt of that,” Nadal said. “At the same time it’s true that especially a few players are able to increase the level of concentration, the level of tennis, level of intensity in some places. If you have to do it, this is one of the places.”

Federer hasn’t done it in the biggest moments in New York over the last decade. The loss to del Potro was followed by semifinal defeats against Djokovic in both 2010 and 2011, blowing two match points in both. He finally got back to the final again in 2015 but was beaten by Djokovic, then had to miss the 2016 event because of a knee injury.

He won the Australian Open and Wimbledon in a resurgent 2017 but tweaked his back while reaching the Montreal final and knew his body and his game weren’t in shape by the time he got to New York.

“I knew from the get-go it was not going to be possible for me to win,” Federer said. “Everything would have had to fall into place.”

So he was even more cautious in monitoring his schedule this year, sitting out the clay-court season again and pulling out of Toronto, making Cincinnati his only hard-court warmup. That’s left him only four tournaments in five months, perhaps explaining some of the shots that once were winners but were sprayed around the court against Djokovic.

“It’s a fine line of how fit do you need to be and how much tennis can you play to be competitive?” Hall of Famer Rod Laver said. “And if you’re not able to go get the match practice, then you’ve got to rely on being competitive on the other side of the coin, which is how fit can you be. He certainly is fit enough but mentally in the final, I could tell he was sort of down. You could tell he was just frustrated with some of the shots that he played.”

Federer won’t second-guess his scheduling, believing he’s made the right decisions for his preparation. Nor will he kick himself over the U.S. Opens lost over the last decade.

“I won the U.S. Open five times. So I stand here pretty happy, to be quite honest,” Federer said. “It’s not like, ‘God, the U.S. Open never worked out for me.’ It hasn’t the last couple years, but it’s all good.”