Bracket busted: 10 of top 13 women’s seeds gone at US Open 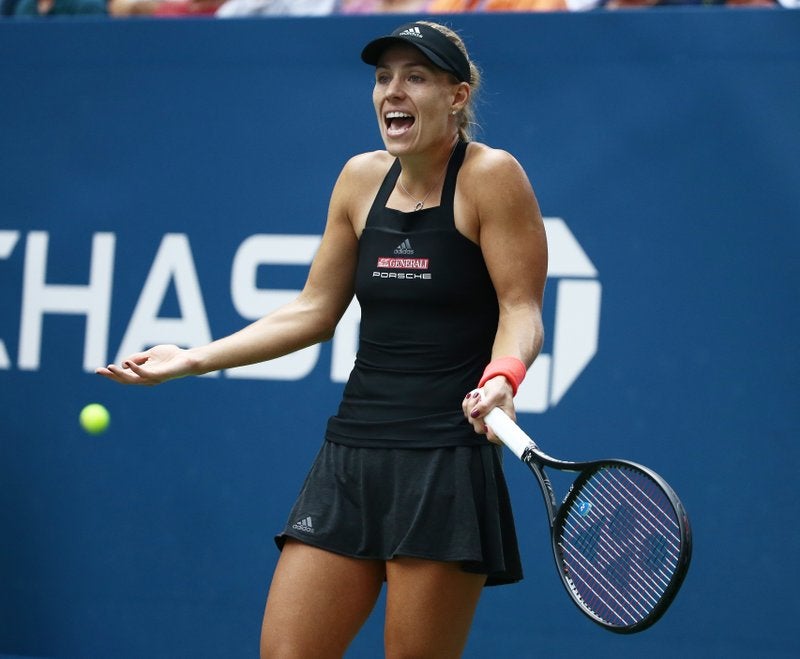 Angelique Kerber, of Germany, reacts against Dominika Cibulkova, of Slovakia, during the third round of the U.S. Open tennis tournament, Saturday, Sept. 1, 2018, in New York. (AP Photo/Andres Kudacki)

His pick is on point — Madison Keys knows how to make a Final Four.

Keys was one of the fortunate favorites in the Open, as she survived-and-advanced to the Sweet 16.

But much like Vitale would say in a March stuffed with busted brackets, the women’s side is loaded with upset specials.

Wimbledon champion Angelique Kerber was eliminated, leaving none of this year’s Grand Slam winners left in the U.S. Open. And No. 5 Petra Kvitova lost later, meaning only three of the top 13 women’s seeds remain in the field. And it’s still just Week 1 in Flushing Meadows.

It’s similar to the way things went at the last major tournament: For the first time in Wimbledon history, none of the top five women’s seeds reached the round of 16. And only one of the top 10 made it to the second week there.

“I was not able actually to play my best tennis in the important moment,” Kerber said.

Top-ranked Simona Halep, the French Open champion, was eliminated in the first round. Australian Open champion Caroline Wozniacki, the No. 2 seed, fell in the second.

Only No. 3 seed and defending champion Sloane Stephens remains among the top six women.

On Saturday alone, No. 6 Caroline Garcia, No. 10 Jelena Ostapenko and No. 13 Kiki Bertens were eliminated, too.

The early stunners seem to clear the field for No. 17 seed — oh, and six-time champion — Serena Williams to move in on another title.

Maybe the losses are a case — or curse — of the Louis Armstrong blues.

Halep, Wozniacki, Kerber and Kvitova were all beaten at the new Louis Armstrong Stadium. Two-time major champion Garbine Muguruza lost there, too, in the second round.

The 14th-seeded Keys has stuck around in a field smacked with upsets.

Keys whiffed on an overhead, fought a case of first-set jitters and never found a groove with her backhand. She rallied after dropping the first set and the U.S. Open finalist from a year ago beat Aleksandra Krunic 4-6, 6-1, 6-2 at Arthur Ashe Stadium on Saturday.

Keys plays Cibulkova in the quarters.

Keys lost to Stephens in the final last year and lost to her again this year in the French Open semis. But Keys has been plagued with various injuries (right wrist and ribs, notably) most of the season and slipped out of the top 10 in the rankings.

Krunic beat Keys four years ago at Ashe and the Serb seemed poised to do it again when she took the first set. Keys rebounded to win 12 of the last 15 games and thanked the pro-American fans for pulling her through into the round of 16.

“The biggest confidence boost for me has been being able to get myself back into those matches and knowing that in a situation like today, if I make some adjustments and stay calm, then I can usually figure things out,” Keys said.

Keys’ parents are both attorneys and she picked up some jargon — from a different kind of court — when she explained how she fanned on an overhead.

“In my defense,” she said, laughing, “the sun was right there. The ball went right there and I couldn’t see it. You know, it happens. At least it doesn’t happen to everyone else on national television.”

She pleaded the fifth when asked how having the top seeds out of the tourney affects her and potentially makes for an easier road back to the final. Like everyone else who watched, she couldn’t ignore, though, the dominance by Williams over sister Venus Williams on Friday night. Serena equaled her most-lopsided victory against her sister with a 6-1, 6-2 rout.

“I think she played really well. You obviously have to play well to beat Venus,” Keys said.

The 23-year-old Keys joined Stephens, Venus Williams and CoCo Vandeweghe for an all-American semifinals at last year’s Open. Keys’ run to the French Open semifinals showed an overall development of her game. Her big-hitting style makes her more of a natural fit on hard courts and there’s no reason she couldn’t have another long stay in New York.