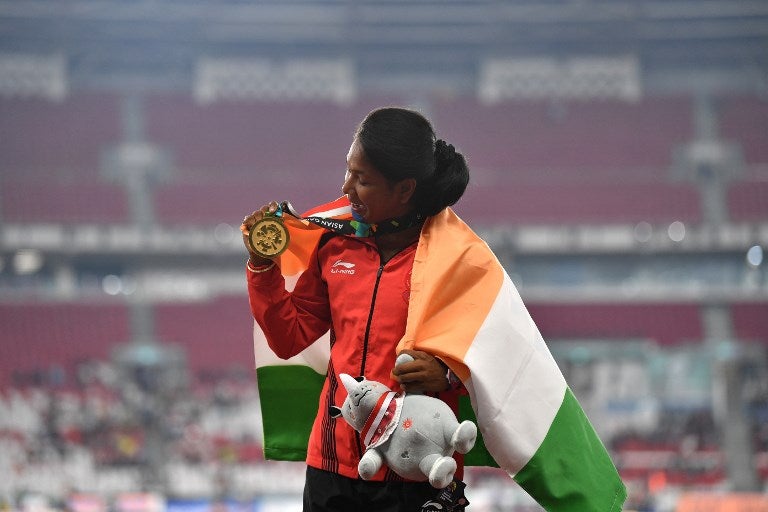 Gold medallist Swapna Barman of India celebrates during the medal ceremony for the women’s hepatatlhon at the 2018 Asian Games in Jakarta on August 30, 2018. / AFP PHOTO / Juni Kriswanto

From a twelve-toed heptathlete to a one-time cattle herder, it was an eclectic mix of athletes mostly from rural areas that saved the day for India at the Asian Games in Jakarta.

After teams from traditional powerhouse sports kabaddi and hockey crashed out, it was up to this group from humble origins to turn around the country’s fortunes.

Swapna Barman stood out with her twelve toes — six per foot — to clinch gold in heptathlon, chipping in to help India achieve a record 69 medals at the continental games.

A daughter of a rickshaw puller from the West Bengal city of Jalpaiguri, Barman overcame serious pain as she blazed to victory with ill-fitting shoes.

For jobless Manjit Singh — once a cattle herder — it was gold in the 800 metres as he outpaced race favourite Jinson Johnson to become a national hero.

Singh, who hails from a small village in the northern state of Haryana, trained far away from home for over a year, helped out for money by his father.

Javelin-thrower Neeraj Chopra, a farmer’s son from a rural Delhi suburb, didn’t disappoint as he claimed victory with an Indian record of 88.05 metres to add to his Commonwealth title.

Meanwhile Dutee Chand, who was barred from the 2014 Games over her hyperandrogenism, a condition that raises testosterone levels, captured two silver medals in the 100 and 200m women’s sprint.

India’s total of 15 golds, 24 silvers and 30 bronze surpassed their previous best of 65 medals in the 2010 edition in Guangzhou, China.

“It was a decent showing by our squad. There were more medals than the previous years and there are more silvers than bronze. And even the gold count increased in the last few days,” Singh told AFP.

“More importantly there was no controversy of any kind. All the players showcased utmost discipline. There was disappointment in kabaddi and hockey but these things happen in sports,” he added.

India’s failure to reach the men’s kabaddi finals had threatened to plunge their Games campaign into crisis after Iran stunned the seven-time winners in the semi-finals.

India had already slumped to their first Asian Games kabaddi defeat against South Korea in the group stages, but having to settle for bronze in a sport widely thought to have originated in India was a bitter pill to swallow.

The Indian women also lost out to Iran in the final.

The defeats were part of a wider scandal in India that saw a high court rule the selection process for athletes as “eyewash” a day before the Games began.

In a bizarre series of events, it was decided that the Asian Games team would have to square off in September against the athletes who missed out to win the right to keep their competition bonuses.

Singh said events back home likely impacted the performance of the Asiad team.

“They must have been under pressure to win here and then go for the trials back home,” he said. “So that would have played on their mind, but nonetheless it was disappointing.”

India’s hockey team was also in the firing line as they suffered a shock loss to Malaysia in the semi-finals.

Their win in the bronze play-off against arch-rivals Pakistan was barely any consolation as the one-time hockey powerhouse missed out on a chance to qualify for Tokyo 2020.

India’s women settled for silver after losing the final to Japan.

One official in India claimed the men’s poor performance was down to their bad attitude.

“Our men players have become spoilt brats. They are always busy on social media and have no regard for discipline,” the hockey official was quoted as saying by the Press Trust of India.

Still, India towered over its neighbours Pakistan, Afghanistan, and Nepal who could only muster seven medals between them, while Bangladesh and Sri Lanka drew a blank.

Pakistan teenager Nargis, who goes by a single name, was the first woman to win a medal for her country at the Asiad after bagging bronze in karate.

Nepal got a silver in paragliding, but Bangladesh went home without a medal for the first time in 36 years.

“We don’t have good (enough) infrastructure to produce medal-winning athletes. There are not many facilities in districts,” AK Sarkar, Bangladesh’s deputy chef de mission, told AFP.

Read Next
TNT stops skid, outlasts winless Columbian in OT
EDITORS' PICK
What’s at stake for every fighter at ONE: NextGen
Gordon calls 2 Pharmally execs ‘Senate fugitives’ after no-show in probe
Isko Moreno bares ‘two-pronged’ approach to rehabilitate MSMEs
Climate Change Commission and Nestlé PH to discover sustainability-focused solutions
Legarda emphasizes role of ICC/IPs in nation building this IP month
NCR’s COVID-9 alert level may be downgraded from 3 to 2 soon — DOH
MOST READ
LJ Reyes says Paolo Contis made ‘no efforts’ to talk to her after their split
Drivers with no traffic violations can now renew licenses for 10 years
Yang’s Princeton degree raises eyebrows among senators
Gordon calls 2 Pharmally execs ‘Senate fugitives’ after no-show in probe
Don't miss out on the latest news and information.