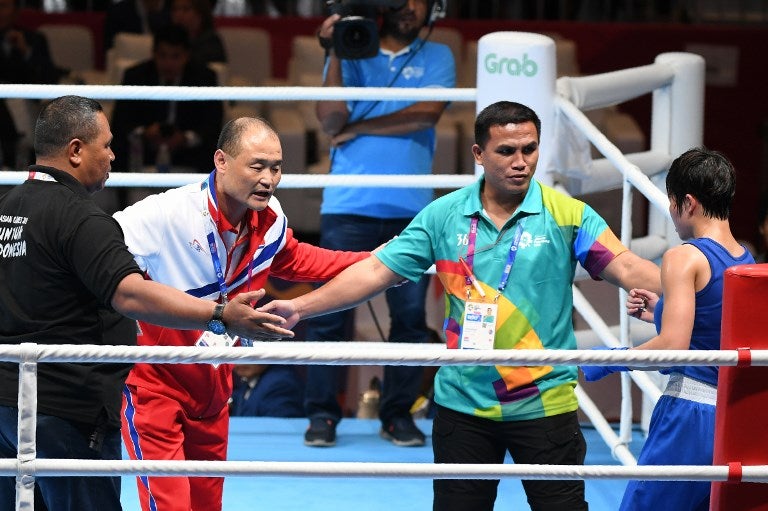 The International Boxing Association says it is embarking on a “cultural change” to prevent the sport being thrown out of the Olympics, as one Asian boxing chief warned “the clock is ticking”.

The Asian Games were again marred by ugly protests at judging decisions, with two North Korean coaches removed by police and booted from the Asiad after their fighter lost a split decision.

“We are going to change the culture in AIBA,” the governing body’s executive director Tom Virgets told AFP on the sidelines of the Asian Games boxing tournament in Jakarta.

Four years ago in Incheon, South Korea, there were scuffles with police in the arena and foul-mouthed tirades from coaches and relatives after a series of controversial decisions.

One boxer even tearfully refused to accept her bronze medal and was banned from the sport for a year.

“We have an issue of competence in our officiating and that’s on us,” admitted Virgets.

“Our president Gafur Rakhimov is very, very committed to putting in whatever resources necessary to improve the education process of our officials. We’ve got to get better.”

The noble art was one of six original sports in the ancient Olympics, but it faces the real prospect of being knocked out by the International Olympic Committee (IOC) and losing its place at Tokyo 2020.

The IOC has been losing patience with boxing since a judging scandal at the 2016 Rio Games when all 36 officials and referees were suspended while allegations of bout-fixing were investigated.

IOC president Thomas Bach said in February that he was “extremely worried about the governance of AIBA”.

And though amateur boxing’s under-fire chiefs handed over a crucial report on internal reforms to the IOC in April, the threat remains.

“This report shows some progress and goodwill but still lacks execution and substance in some areas,” Bach said in May.

“Therefore we retain our right to exclude boxing from Tokyo 2020.”

‘The clock is ticking’

Philippines boxing chief Ed Picson said he is worried the IOC could carry out their threat.

“I hope it doesn’t happen,” he told AFP. “The clock is ticking.”

“The IOC seems to think that unless certain drastic measures are applied… it would be justified to pull boxing out of the Olympics,” said Picson, who is secretary general of the Association of Boxing Alliances in the Philippines.

Rakhimov declined to speak to AFP when approached during the Asian Games, but AIBA issued a written response when asked about the problems boxing is facing.

“AIBA has delivered two comprehensive update reports to the IOC Executive Board over the past months,” the statement said.

“These reports have outlined the documented improvements in the organisation’s finance, governance, management, refereeing/judging systems, just to mention a few.

Picson questioned some judging decisions against Filipino boxers in Jakarta, complaining Rogen Ladon had been “short-changed” after he was stopped in the flyweight final with a cut and lost on the scorecards up to that point.

The judges awarded his Uzbek opponent the first round, in which Ladon appeared to be on top.

“You tell me, who won that round? Ladon won that round, no doubt,” Picson said, adding that he hoped AIBA’s interim president, who is a former boxer and coach, could implement changes in time to keep the sport in the Olympics.

“Gafur Rakhimov seems bent on satisfying the IOC so we’ll see,” said Picson. “He seems to be exerting a lot of effort to try and straighten things out, that’s a good sign.

“He’s been around boxing a long time and he understands what needs to be done. We are hoping he can continue these reforms.”