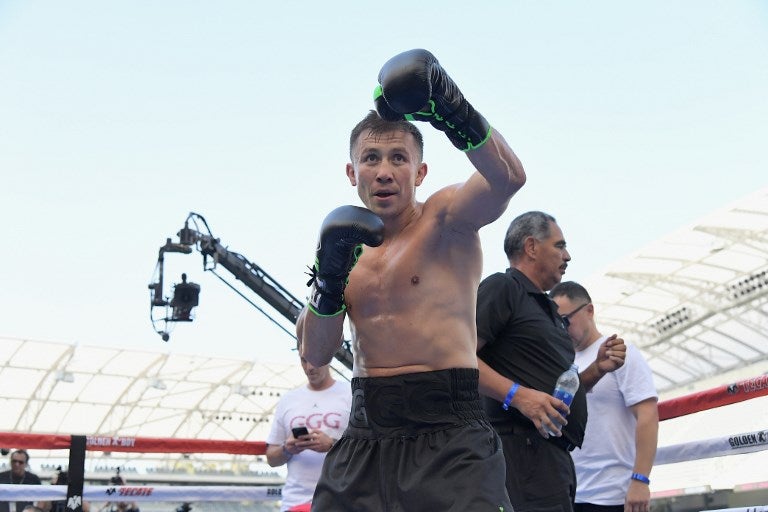 The Chivas Fight Club in the ring with Gennady “GGG” Golovkin at Banc of California Stadium as he prepares for the anticipated rematch with Canelo Alvarez in Las Vegas on September 15th, on August 26, 2018 in Los Angeles, California. Charley Gallay/Getty Images for Chivas Regal/AFP

Gennady Golovkin ramped up his war of words with middleweight rival Saul “Canelo” Alvarez on Tuesday, vowing to “punish” the Mexican slugger in their upcoming Las Vegas rematch.

Unbeaten world middleweight king Golovkin will face off with Alvarez at the T-Mobile Arena on September 15, a year after their first encounter ended in a hotly contested draw.

A rematch planned for May was later canceled when Alvarez failed a drug test, blaming contaminated meat in his native Mexico after testing positive for the stimulant clenbuterol.

Relations between the two camps have been marked by animosity ever since Alvarez’s failed test, with Golovkin accusing his rival of being a drugs cheat.

Alvarez’s trainer Chepo Reynoso raised the temperature for the rematch this week after describing Golovkin as a “donkey” who would be easy to beat.

“Golovkin is a donkey who doesn’t think,” Reynoso said.

“He doesn’t have a thought in his head. He’s a man that comes forward throwing the same punches. There’s not much that we need to change.”

Asked to comment on Reynoso’s remarks in a conference call with reporters on Tuesday, Golovkin accused Alvarez of “lacking class.”

“I don’t even want to go to that level. It just shows a lack of class, low class, lack of upbringing, lack of intelligence,” he said.

“It just shows how they behave. I’ve never said anything so low about anybody.”

The barbs from the Alvarez camp have left Golovkin more determined than ever to retain his titles.

“I want to punish him for all the bad things him and his team have done,” Golovkin said. “I want to put him down to size.”

“Canelo’s done some things that he feels he needs to pay for, and he’ll do that in the ring. In the gym, it’s just another day training in the gym.”