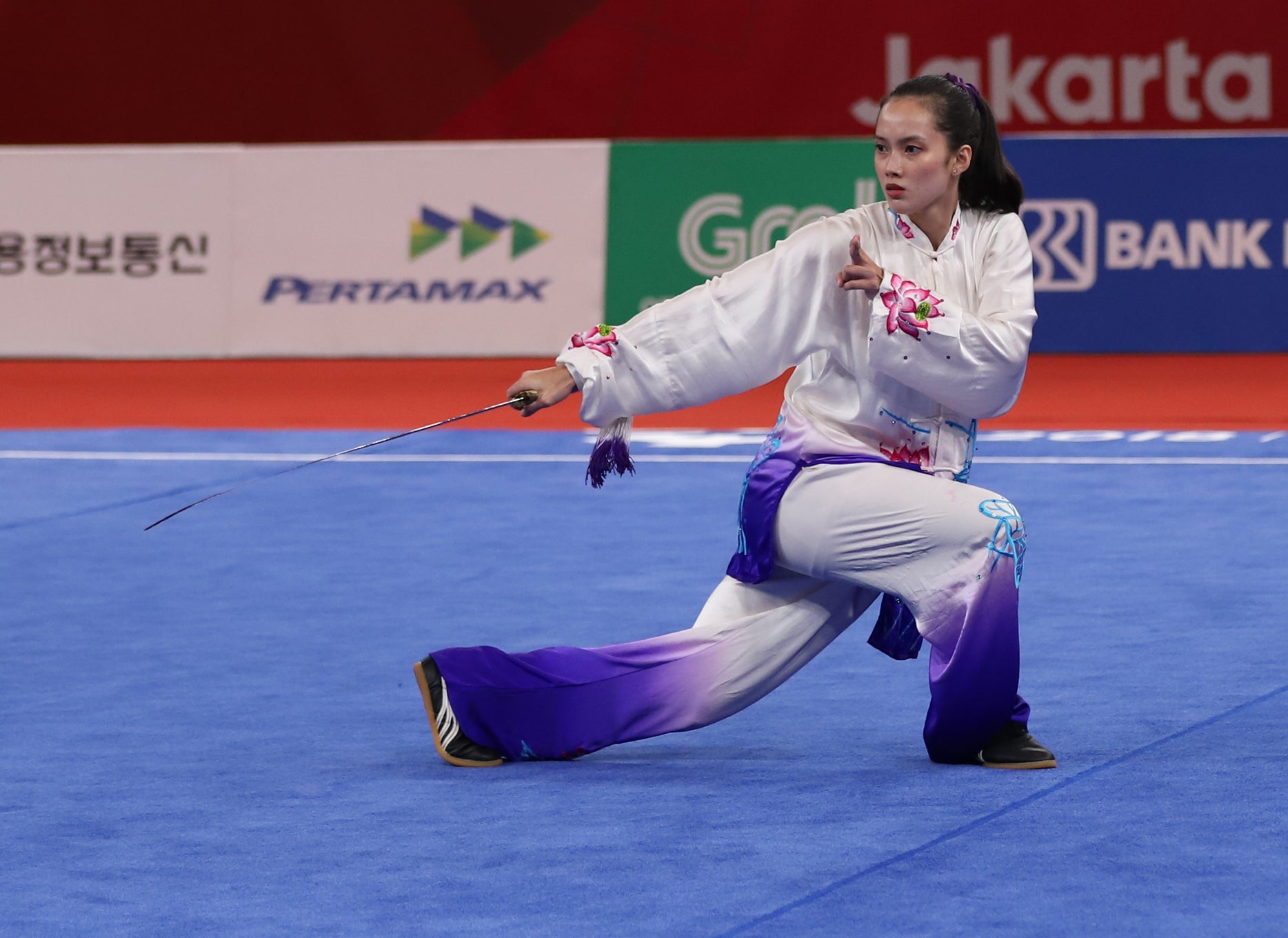 With less-than-ideal training and a recycled costume, Agatha Wong performs her heart out for the country en route to a bronze medal in the Asian Games. POOL PHOTO

It is 2005. Inside the Rizal Memorial Sports Complex, the boxing gym is busy with a flurry of activity—unusual for a Monday morning, with no major international competition in sight. The whup-whup of boxing gloves pounding against mitts mixes with the smell of pain-soothing oils, as a weekend warrior sweats it out under the tutelage of a national boxer looking for some extra cash to augment his monthly paycheck.

“Harder! Hit harder,” says the national boxer from behind the mitts. The sweating amateur slogs through a painfully slow 1-2, none of which produce enough contact to impress his trainer.

More than a decade later, even in an era where political correctness has somewhat curbed prejudice, Agatha Wong understands the concept of the statement as a putdown.

“Every country is actually a [predominantly] patriarchal society so when they say ‘you play like a girl,’ it’s always as an insult,” said Wong during a luncheon hosted by St. Benilde in honor of its Asian Games medalists.

It took that edition of the Asiad to champion the case for gender equality in sports. And what a case it was.

The Philippines’ haul from the 18th edition of the quadrennial meet was four golds, two silvers and 15 bronzes. Of those 21 medals from Indonesia, 13 came from female national athletes.

And the sports where the women excelled are generally thought to be macho disciplines: weightlifting, golf, skateboard, Kiyomi Watanabe’s silver in judo, and bronzes from the likes of Pauline Lopez in taekwondo, Meggie Ochoa in jiujitsu, and Junna Tsukii in karate.

Wong is a bronze medalist for wushu in women’s taijiquan. Even as the discipline favors grace over power, the St. Benilde product needed a heavy dose of machismo to see her through a painful performance in the Asian Games on the way to the bronze medal.

She was diagnosed with a Grade 2 slipped disc about four months before the Asiad, but she had been feeling the pain even earlier.

“I already felt the pain in February but I just chose to ignore it,” she said.

And then she suffered from patellar tendonitis, which limited her ability to perform movements critical to her performance and severely cramped her practice sessions—she needed to rest for two weeks.

“Every time I had to bend my knee or squat, it was really painful,” said Wong. “When I competed in the Asian Games, the biggest challenge [I faced] was to ignore the pain.”

Girl power became such an overarching narrative in the Asian Games, especially with the golden circle winding up a female exclusive. It sent a signal to sports officials that the road to the country’s first gold medal might need two x chromosomes. And the women are not shying away from the challenge as well.

When Didal made it clear she was hunting for gold in Tokyo, Diaz backed her big dreams.

“Everybody dreams of being in the Olympics,” Diaz, who takes up business management at St. Benilde, said in Filipino. “But a lot of athletes are scared of saying they want to win in the Olympics. Marge is claiming it.”

“I’m claiming it too,” she declared, before gasping and covering her mouth with her hands as she realized the pressure she put on herself.

But there was a bigger victory scored by the women, a social impact that Wong hopes will help push equality further into a traditionally male-dominated sporting culture.

“I think the perspective on gender equality has changed,” said Wong, a Consular and Diplomatic Affairs graduate of St. Benilde’s School of Diplomacy and Governance. “We proved we are not that weak. We are equally the same as men.”

“You cannot downgrade women; women are as great as men,” added Wong.

The social impact is not lost on Diaz, whose foray into weightlifting opened her to a world also dominated by male athletes. But she hopes her achievements and that of the women athletes in the Asian Games changes things.

“Somewhere, there is a little girl who is also curious about weightlifting,” said Diaz, adding that she hopes the sporting landscape will be kinder—enough to encourage that faceless young hopeful to pursue the sport and aspire for greatness.

Four gold medals may not be enough to trigger a major social upheaval that will put women out of inequality’s reach. There will be times when Wong, who admitted to being a victim of bullying when she was young, will still face comments like “you play like a girl” from men who will treat the phrase as an insult.

“I don’t think they know we’re capable of doing anything and everything as long as we want to do it,” said Wong.

But what can immediately change is the woman’s appreciation of the putdown.

Diaz? She has a more direct approach to correcting the fallacy that the remark is demeaning.