Close win means Alvarez and Golovkin could do it again 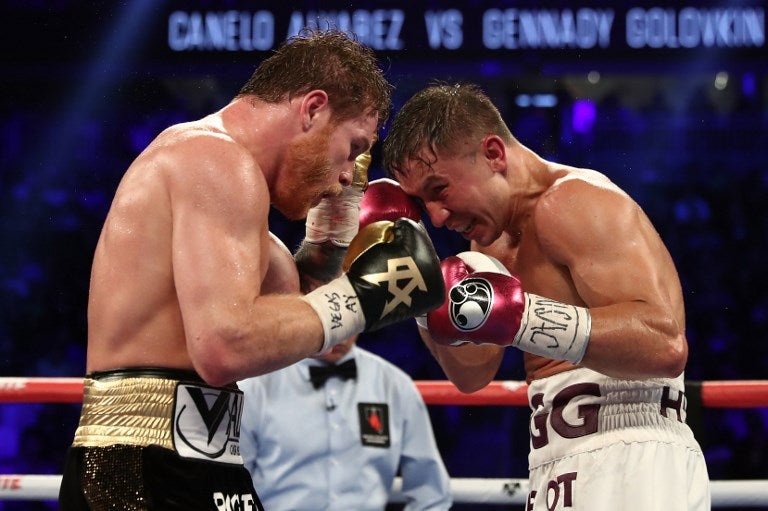 LAS VEGAS — The fight was so close at the final bell that no one in the arena — including Gennady Golovkin and Canelo Alvarez — knew who would leave the ring with the middleweight title belts.

It was Alvarez, though by the slimmest of margins. He won the last round on two scorecards Saturday night on the Las Vegas Strip to hand Golovkin the first loss of his career in a fight that more than lived up to its advance billing.

To settle who is really the best, though, they may just have to do it a third time. And that’s fine with both fighters, who have now gone 24 rounds together with little but a few points on the scorecards to separate them.

“It would be great to have a third fight,” Golovkin said.

A third fight will almost certainly happen, and for that fight fans have to be grateful. Alvarez and Golovkin showcased their skills — and their sport — at the highest level in a fight that one judge scored a draw and two others had Alvarez by a narrow 115-113 score.

But it was Alvarez, the Mexican hero, who proudly carried the belts out of the ring after a bruising 12 rounds that ended with both fighters bloodied and bruised before a roaring crowd of 21,965.

“It’s one of the happiest days of my life,” said Alvarez, who fought Golovkin to a draw a year earlier and had to deal with a positive test for a performance enhancing drug while preparing for the rematch.

It wasn’t so happy for Golovkin, the slugger from Kazakhstan who for years walked through whoever was put in front of him. Golovkin rallied in the final rounds to make the fight close, only to listen in disbelief once again as he wasn’t declared the winner.

“I feel like I’m a champion but he’s also a champion,” Golovkin said. “It was a fight of two champions tonight.”

Indeed it was, as Alvarez abandoned his strategy from the first fight to box moving forward against Golovkin. It was a risky strategy but paid off — though just barely.

Though Triple G and his handlers were careful not to criticize the decision, promoter Tom Loeffler admitted later that it was tough to win a decision in an arena packed with Alvarez fans on Mexican Independence Day weekend.

“I don’t know if we can win a decision in Las Vegas,” Loeffler said.

Ringside punch stats showed a close fight, though they favored Golovkin by a small margin. Golovkin was credited with landing 234 of 879 punches while Alvarez landed 203 of 622.

Unlike many close decisions in boxing, though, there was no huge outcry, largely because the fight was almost too close to call.

“It was me who pushed him back, me who was most aggressive,” Alvarez said through an interpreter. “Unfortunately we didn’t get the knockout, but we got the victory.”

Alvarez said before the fight that he was angry with Golovkin over his beliefs that Alvarez was juiced for their first fight, and would try and knock him out. But few believed he would be the aggressor in a fight against a boxer with big power in both hands.

He was just that, though, in a spirited fight that had no knockdowns but plenty of action. Alvarez controlled the middle rounds as Triple G seemed to tire, but Golovkin fans thought their fighter pulled it out late.

Alvarez said afterward that he wanted to fight again in December, and could against David Lemieux, the Canadian who scored a first-round knockout over Ireland’s Gary O’Sullivan on the undercard. With the lure of big money in a third fight with Golovkin, the two could meet again in May for a trilogy that is rare in boxing these days.

For now, though, Alvarez can celebrate his biggest win at a crucial time in his career as he tries to cement his status as a storied Mexican fighting great.

“It’s very important for me to have a victory for my country,” he said. “This victory will give a lot of pride to my country.”