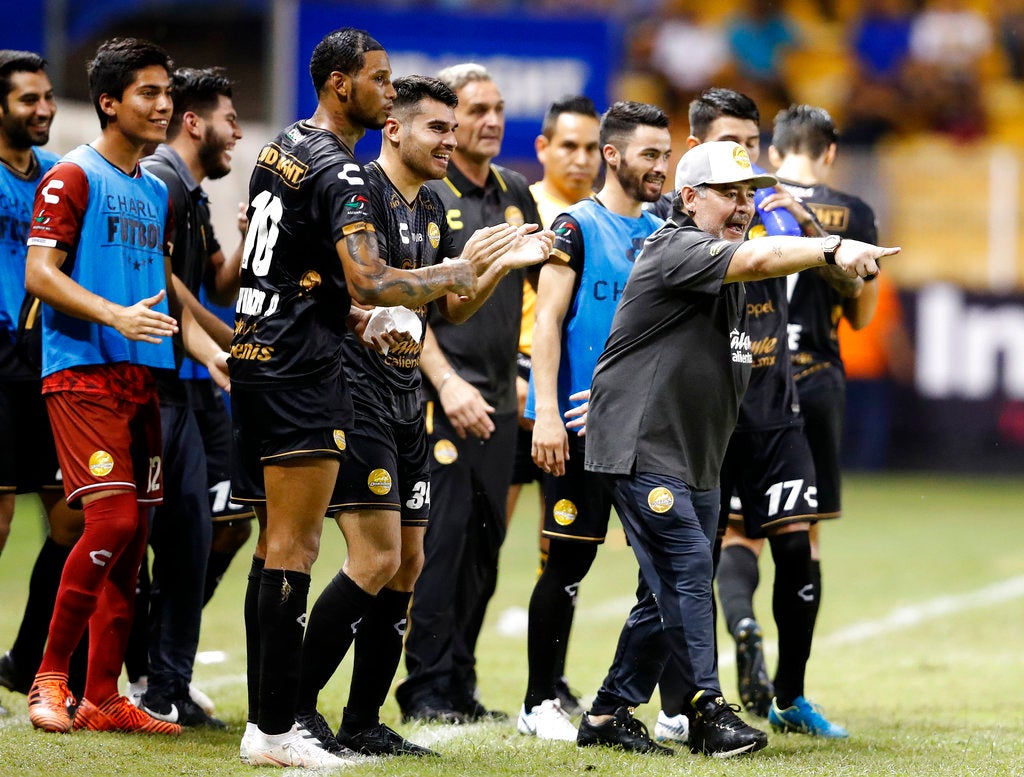 Controversial and combative as ever, Diego Maradona made his Mexican coaching debut Monday with a 4-1 win for his new club, the second-division side Dorados.

It could hardly have been otherwise in the country that saw the Argentine legend score his infamous “hand of God” goal as he led his country to the 1986 World Cup title.

Alternately grinning and defensive, Maradona thumbed his nose at his critics after Ecuadoran forward Vinicio Angulo scored a hat trick to give Dorados the win over Cafeteleros of Tapachula.

“Some people said Maradona’s useless. There were a lot of stupid people going on television to fill up the time,” Maradona told a packed post-match press conference in Culiacan, Sinaloa, his new club’s home base.

“I hope they’ll come to the pitch now and look at my record and see what we’re actually doing, see that I know how to do this.”

Maradona, 57, vowed it was just the beginning for the struggling club, who leapt from 13th place in their 15-team league to 10th with the win over last-place Cafeteleros.

But not all Dorados fans are convinced.

Maradona arrived to a hero’s welcome last week, but has also been the butt of more than a few jokes about why someone who has battled publicly with drug addiction might take a job in the heart of Mexican drug cartel country.

“I’m not expecting much. Maradona has never shown himself to be a good coach. I think there are better coaches than him in Mexico,” said Kevin Juarez, a 26-year-old fan, ahead of the match.

“The one good thing is that Maradona’s arrival has drawn the world’s attention to Dorados,” he told AFP.

Maradona once coached the Argentine national team, including at the 2010 World Cup, but the rest of his managerial career has lacked the sparkle of his playing days.

Other fans in Sinaloa are more optimistic.

“With Maradona’s help, this club can gain a little character and get promoted,” said fellow fan Hector Cuen, 40.

“I can’t see anything bad in Maradona coming to Culiacan.”

Even El Diego only managed to fill Dorados’s 20,000-seat stadium to about half capacity — though that was still more than double the average attendance at the club’s most recent home matches.

Maradona, however, was unfazed by the empty seats.

“Dorados fans are amazing,” he said.

“I looked up and thought I was on the field at Boca” — his old Buenos Aires club, which is legendary for packing its stadium with rowdy crowds.

And residents perhaps have more than sports on their minds these days.

Home to the Sinaloa drug cartel, the western state is in the grips of a bloody power struggle for control of the organization since its founder, Joaquin “El Chapo” Guzman, was extradited to the United States last year.

So far this year, 879 people have been murdered state-wide, and 144 in Culiacan.

Dorados’s owners, the politically powerful Hank family, have been accused of ties to drug traffickers.

But Maradona insists he just wants to concentrate on football.

His outsize legacy in the sport was on full display as he took the pitch on Monday.

Grinning in his track-suit pants and T-shirt, he gave an affectionate pinch on the cheek to rival coach Diego de la Torre, 23 years his junior.

It was a special encounter for the beaming De la Torre: he was named after Maradona by his father, an ex-footballer.