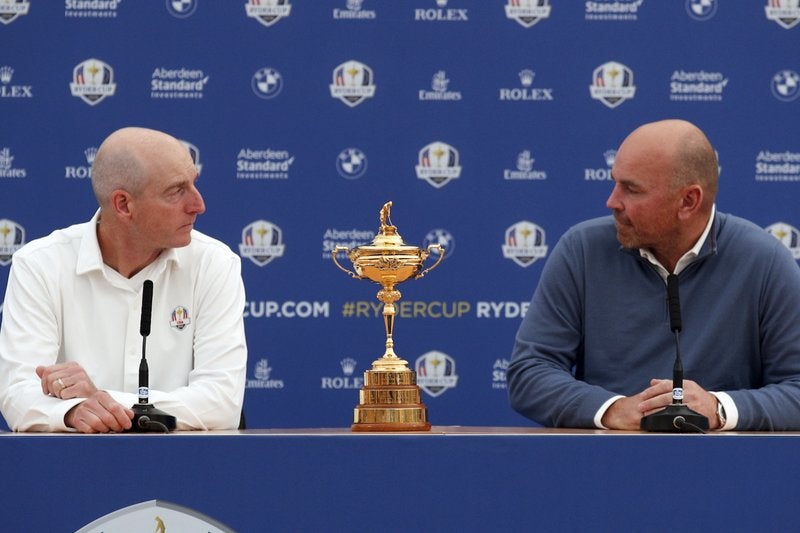 USA Captain Jim Furyk, left, and Europe Captain Thomas Bjorn look at each other during a news conference ahead of the Ryder Cup at the Golf National in Guyancourt, outside Paris, France, Monday, Sept. 24, 2018. The 42nd Ryder Cup Matches will be held in France from Sept. 28-30, 2018, at the Albatros Course of Le Golf National. (AP Photo/Francois Mori)

SAINT-QUENTIN-EN-YVELINES, France — Already the most intense competition in golf, the Ryder Cup doesn’t need help to boost the excitement.

Tiger Woods managed to take it to another level.

He looked like the Woods of old by leading the final 36 holes of the Tour Championship, not letting anyone near him until it was too late, a vintage performance made all the more remarkable by four back surgeries and a future that looked bleak only a year ago.

Woods was a vice captain at the Presidents Cup a year ago this week and said he envisioned a scenario where he never returned to competition. One PGA Tour event into his return, Jim Furyk selected him as a vice captain for the Ryder Cup.

And then he picked him for the team. And then Woods won for the first time in more than five years.

“It’s obviously a nice buzz for our team,” Furyk said Monday, a few hours after the American charter plane landed in Paris.

The entire U.S. team was on a charter that arrived in Paris at about 12:45 p.m. European captain Thomas Bjorn arrived late last week, as did a few of his players. Six of them were at East Lake for the Tour Championship. The first official day of practice is Tuesday.

Monday was as much a time to reflect on Woods as it was to rest up for a busy week at Le Golf National.

“I spent 25 years playing professional golf with Tiger Woods on the scene, and any time he does anything great, that’s a story. And that’s where we want to see him,” said Bjorn, the only player to be paired with Woods over 72 holes and beat him. That was in Dubai in 2001.

“He does so much for the game of golf,” Bjorn said. “Watching that last night, I thought it was brilliant. It was great for the greater aspect of the game.”

The television ratings show as much.

NBC Sports Group said the overnight rating from the Tour Championship was 5.21, the highest-rated telecast in the 12-year history of the FedEx Cup playoffs, which cover 48 events featuring some of the strongest fields of the year.

That was the highest rating of the year this side of the majors, and the highest for the Tour Championship dating to 2000.

“In the end, whatever it is these 24 guys are going to do this week, the game of golf needs that boost of somebody like him that transcends the game to the masses,” Bjorn said. “So for everyone in golf, it’s brilliant.”

Now that Woods is back on his game, the hope for Furyk and the U.S. team is that he’s not back to Ryder Cup form.

“We don’t fear anyone because we’ve played against them so many times before individually,” Bjorn said. “But we respect our opponents and know what we are up against. What stands on the other side we know is one of the strongest American teams of all time. … We do what we do as a European team, and then we go out and take that on the golf course, and that’s all 12 Americans. It’s not one individual.”

Europe has done it well over the years.

The Americans have not won the Ryder Cup away from home since 1993, a drought Furyk has been hearing about since he was appointed captain in January 2017. The Americans have confidence from winning big at Hazeltine two years ago — Woods was a vice captain that week — and from a team that boasts nine major champions.

That makes them favorites on paper. And that means little, as recent history would suggest. Even with the loss two years ago, Europe still has won eight out of the last 11 times dating to that ’93 American victory at The Belfry.

“I’m not sure you really need extra motivation in a Ryder Cup,” Furyk said. “Obviously, I think there’s a thorn in their side, and it’s been that since 1993, and there’s some veteran players that have played on a number of these teams that have never won on foreign soil. It’s not anything I need to mention in the team room. They are well aware of it, and they are well aware of how difficult it is to win in Europe.”

Furyk, meanwhile, did well not to add to the hyperbole over Woods winning again. Woods was trending in that direction, from the brief time he held the lead on Sunday at the British Open to his runner-up finish at the PGA Championship.

How much did Woods contribute to the buzz Sunday night?

The Americans had a room set aside in a hotel near the Atlanta airport for a team dinner before flying to France.

“We had a whole group of guys waiting in the team room, and then a giant roar when Steve Stricker walked in the room after his victory,” Furyk said with a laugh.

“Nice to have those two guys play so well, and start us off pretty well this week,” Furyk said.