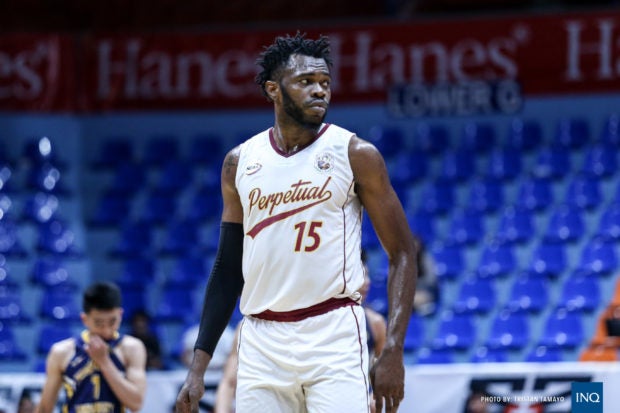 AJ Coronel led the lopsided victory with a career-high 22 points, 15 of those scored in the first quarter, while Prince Eze saved his best for last with 10 of his 16 points coming in the fourth period to power Perpetual, which joined College of St. Benilde in fourth place with an 8-5 record.

“As long as we continue our roll we’ll be in good shape,” said coach Frankie Lim, whose squad is coming off an 83-81 stunner over top seed Lyceum on Friday.

The Altas led from start to finish but the Heavy Bombers didn’t go down easily with Jed Mendoza and Leo Esguerra keeping them in the fight.

Mendoza finished with 22 points, five rebounds and five assists while Esguerra added 21 points and eight rebounds for tailender JRU, which is out of the running at 2-12.

In the opener, role players picked up the slack offensively to lift Letran past Emilio Aguinaldo College, 92-81.

Rookie Coy Galvelo and Jeremiah Taladua stepped up with 15 points apiece while Fran Yu added 13 as the three gave the Knights an offensive lift with main hitters Bong Quinto and JP Calvo struggling.

Read Next
PH skaters gearing up for 2019 SEA Games
EDITORS' PICK
COVID-19 cases surging in all regions and provinces, says DOH
Acer starts the year off strong with the Aspire Vero National Geographic Edition
DOH: Too early to say COVID-19 cases are declining
Duterte praises military but slams police for poor discipline, corruption
The best of bayside and city living at SMDC’s Sail Residences
Over 3 Million worth of prizes to be won at Smart Padala’s SENDali Manalo Promo!
MOST READ
Marcos Jr. visits Cebu, stands as ‘ninong’ to mayor’s son
Duterte praises military but slams police for poor discipline, corruption
Djokovic has to comply with rules to go to Spain, PM says
Comelec junks petition to scrap Bongbong Marcos COC
Don't miss out on the latest news and information.