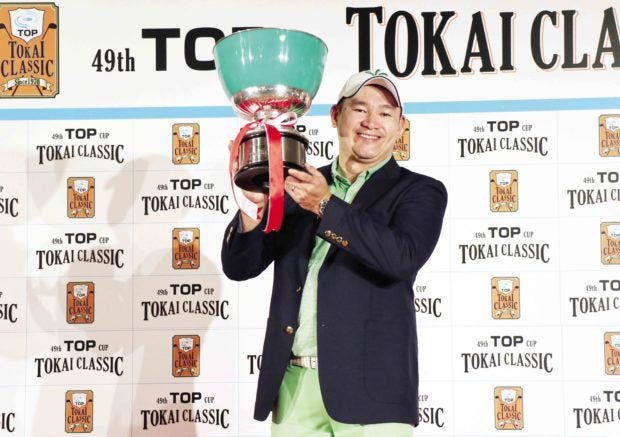 Angelo Que never lost hope that one day, he’ll be clutching a champion’s trophy in Japan.

It finally happened on Sunday for the 39-year-old golfer.

With a major champion watching and probably expecting him to fold up, Que banged in back-to-back birdies on the 16th and 17th to close out with a 66 and win the Top Cup Tokai Classic of the Japan Tour by two strokes.

YE Yang, the Korean who shocked the world by becoming the first Asian major winner at the 2009 PGA Championship, just couldn’t match the fast finish of the Filipino and had to settle for a share of second.

Que wound up with a 271 aggregate to beat Koreans Yang and Won Joon Lee.

Yang shot a 67 while Won carded a 66 at the Miyoshi Country Club west course in Aichi, Japan.

“It’s a relief really that I finally won in Japan. I played so well this week but those two crucial putts were a gift from God,” said Que who picked up his first win on his fourth year on the Japan Tour.

Que pocketed a 22-million yen (about P10.4 million) jackpot for his victory.

It wasQue’s fourth major international title after the Worlwide Selangor Masters in 2010, the Philippine Open in 2008 and the Carlsberg Masters Vietnam in 2004. His previous best finish was second place, losing to Japanese Toshinori Muto in a playoff for the ISPS HANDA Global Cup in 2015.

“I’m not getting any younger so I couldn’t be happier with his breakthrough win,” Que said.

Que is flying home on Tuesday and he can’t wait to show the newest—and probably the biggest—addition to his trophy collection to his wife Tracy and two children.

“I owe it to them. They’ve always been the reason why I’ve been working hard to play well and stay competitive.”