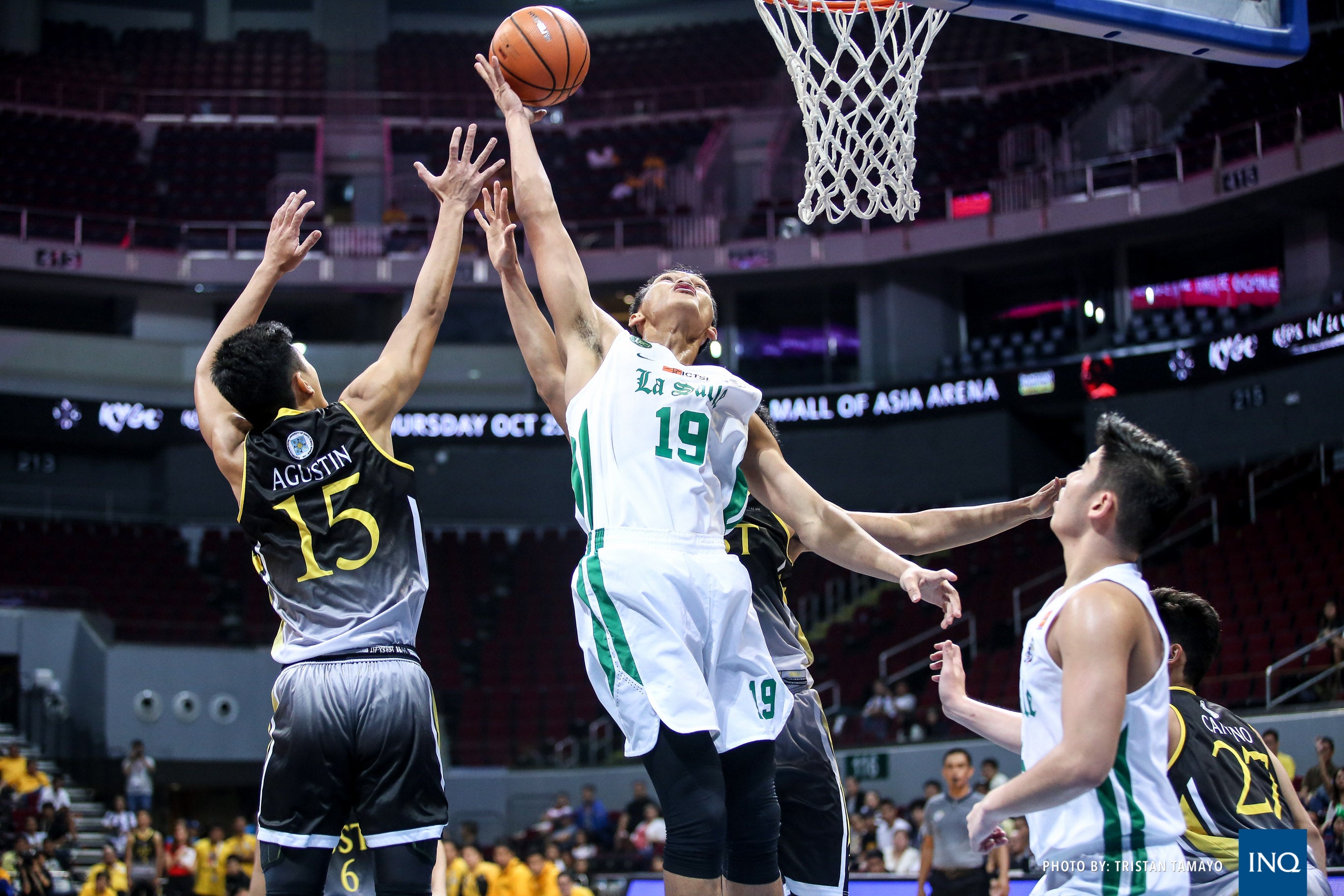 About nine minutes and a little over three points. That’s how much Justine Baltazar averaged under former coach Aldin Ayo. But the La Salle beanpole always knew he had it in him to be a big-time player.

Maybe it was coincidence that Baltazar is having a breakout season, La Salle’s first after Ayo’s successful tenure with the Green Archers.

“I just wanted to show coach Aldin (Ayo) that I have improved my game,” said Baltazar, minutes after the 6-foot-6 center whipped out a career-best 22 points plus 10 rebounds and dumped them on Ayo’s new squad, the University of Santo Tomas, in a 99-72 rout Wednesday night in the UAAP at Mall of Asia Arena.

For the rest of the Archers, though, it was merely business as usual—nothing personal.

Aljun Melecio had his season-best 19 points and also grabbed eight rebounds in a performance fired up by a 67-61 loss to the University of the Philippines.

“It’s not about playing against coach Aldin, but we really needed to bounce back,” said Melecio, who anchored a strong first-half effort by the Archers by scoring 17 of his output there.

Four other players scored in twin digits twin digits in the Archers’ finest performance yet this season.

“The primary game plan for us today was to play at a high level for 40 minutes,” said La Salle coach Louie Gonzales, who served as Ayo’s assistant the last three years. “It was a good thing we were composed and everyone contributed and executed even late in the game.”

With the win, the Archers now share third spot with the Far Eastern U Tamaraws, who turned back National U Bulldogs, 73-68, in the second game to also rise to 3-2.

Following an embarrassing 90-65 defeat to University of the East last Sunday, the Tamaraws took their frustrations out on the Bulldogs, who kept in step with FEU until Wendell Comboy exploded in the final period.

Comboy not only apologized to the FEU community for their lackadaisical performance against NU last Sunday, but also showed how bad he wanted to bounce back with 10 of his 18 points in the last quarter, with his jumper with 1:45 remaining giving the Tamaraws a 68-63 cushion.

“I struggled to sleep after the loss to UE,” said Comboy. “That was not who we are as a team. That’s why we couldn’t wait for this game to come for us to be able to bounce back.”

He’ll sleep a little better after this one. And maybe more if the Tamaraws can flash some more consistency.

The Tamaraws survived the Bulldogs’ torrid outside shooting in the first half, which saw NU nail nine of 20 shots from beyond the arc. But the Bulldogs made just 4-of-14 the rest of the way, while Comboy combined with Gonzales and Ken Tuffin to put away NU.

“The problem is how we respond after a victory because that’s what happened against UE,” said FEU coach Olsen Racela. “More than bouncing back, we have to be consistent with our approach every game.”

It was the second straight 30-point blowout loss for the Tigers, who share sixth to eighth spot with NU and UE with 1-4 records.