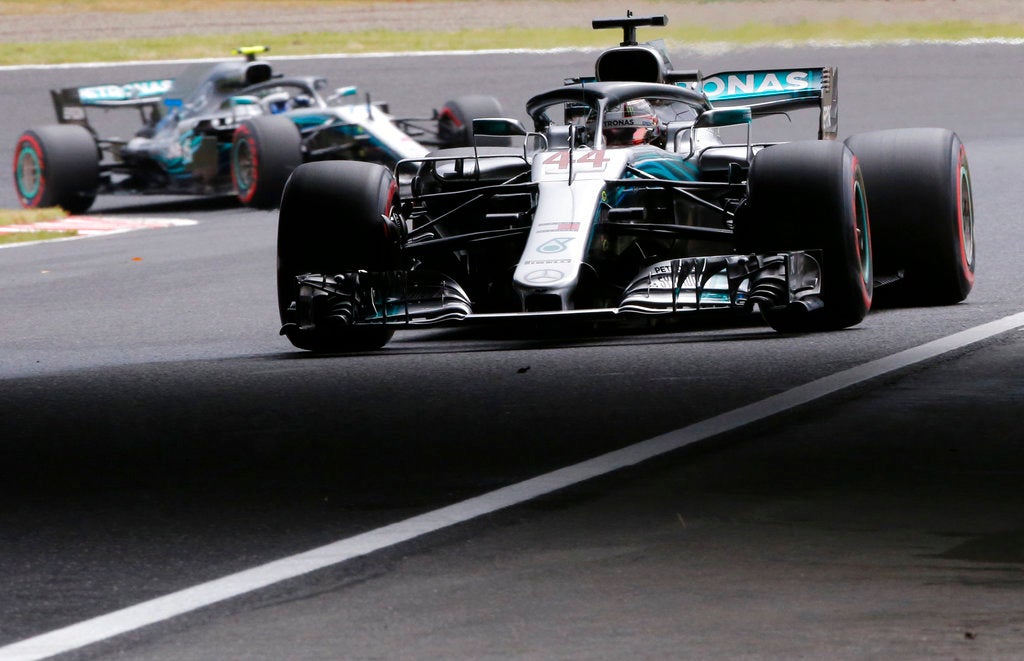 SUZUKA, Japan — Championship leader Lewis Hamilton claimed pole position for the Japanese Grand Prix on Saturday, leading a 1-2 finish for Mercedes and taking a step closer to securing his fifth Formula One title.

Mercedes read the weather conditions perfectly, ensuring that both drivers recorded their best laps early in the third part of qualifying, before the rain increased to secure their fifth consecutive one-two at Suzuka.

“The call we made to go out in Q3 which is probably the most difficult call,” said Hamilton. “You saw all of us fumbling and trying to figure out what to do — the team were spot on with it and it gave us an opportunity to grab this pole position.”

Ferrari driver Sebastian Vettel’s qualifying run did not go as well with the German hitting a wet patch and spinning off the course. Vettel finished ninth, further damaging his chances of catching Hamilton in the championship race.

With five races to go, Hamilton leads Vettel by 50 points in the standings. Race winners get 25 points.

Hamilton, who claimed the 80th pole of his career, will be bidding for his fifth Japanese Grand Prix victory in Sunday’s race.

“A big thank you to everyone back at the factory,” said Hamilton. “I’m so proud to be on this journey with them. Never in a million years thought I’d get to 80.”

It was a disappointing afternoon for Red Bull’s Daniel Ricciardo who ended up 15th after failing to set a time in the second qualifying, heading into the pits at the end of his outlap with what appeared to be an engine problem.

Toro Rosso’s Brendon Hartley claimed his best ever grid position in sixth, one place ahead of teammate Pierre Gasly.

Esteban Ocon was eighth, ahead of Vettel, with his Force India teammate Sergio Perez rounding out the top 10.

Marcus Ericsson crashed at Turn 7 early in the session.

The Sauber driver ran wide onto the grass and spun into a barrier, leading to a six-minute red flag.