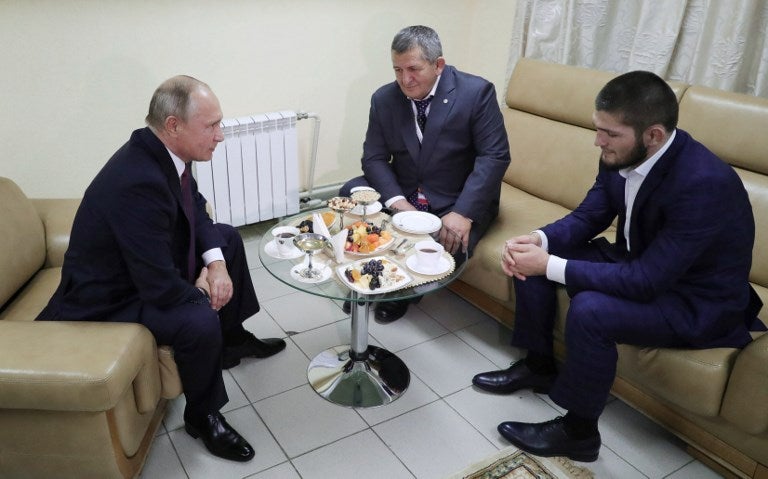 Russian President Vladimir Putin (L) speaks with UFC lightweight champion Khabib Nurmagomedov (R) and his father Abdulmanap (C) during their meeting at the Russia is a Sport State forum in Ulyanovsk on October 10, 2018. – Unbeaten Khabib Nurmagomedov will not be stripped of his UFC lightweight title despite his role in a post-match brawl Saturday, UFC president Dana White said in a website posting October 10, 2018. (Photo by Mikhail KLIMENTYEV / SPUTNIK / AFP)

The Russian strongman appeared on state television meeting the fighter, who defended his Ultimate Fighting Championship lightweight title against Conor McGregor on Saturday, along with his father.

Nurmagomedov faces a possible suspension over the post-fight fracas and has not received his prize money, though he will keep his title.

Despite the controversy, he has received a hero’s welcome in Russia and blasted his opponent as a “dimwit”.

Putin gave the fighter a mild lecture over his behavior, but stressed that any Russian will respond forcefully to an attack from the outside.

“I will ask your dad not to punish you harshly,” the president told the 30-year-old fighter from the mainly Muslim Dagestan region, adding that “you won worthily and convincingly”.

Putin said that like other Russians he had “closely followed” the fight in Las Vegas and “got emotionally involved”.

After the fight, Nurmagomedov jumped over the fence and apparently tried to attack his opponent’s training partner. The crowd was so hostile that the UFC president Dana White did not present the Russian with his belt.

Nurmagomedov expressed no remorse, telling Putin he responded to “disrespect” and “provocations” from his opponent and that he hoped to be vindicated.

Putin told him that a Russian must restrain himself while at home in his own country, which he called “a big family, but when attacked from the outside, may respond appropriately”.

“In a family anything can happen, (but) we never allow ourselves to go beyond certain limits,” Putin said.

“But if they attack us from the outside, of course, not just you — all of us can jump in such a way, they won’t know what hit them,” said Putin, nevertheless cautioning Nurmagomedov that “it’s better not to take things so far”.