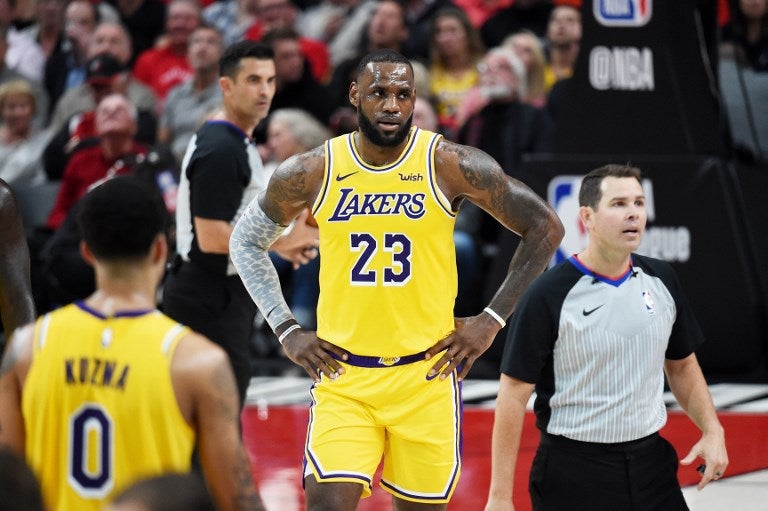 LeBron James #23 of the Los Angeles Lakers argues with referee Brian Forte #45 in the second quarter of their game against the Portland Trail Blazers at Moda Center on October 18, 2018 in Portland, Oregon. Steve Dykes/Getty Images/AFP

James scored a game-high 26 points and had 12 rebounds but the Portland Trail Blazers spoiled his Lakers debut with a 128-119 victory at the Moda Center arena.

The basketball world has been waiting months to see the 33-year-old James in the purple and gold jersey and when the moment arrived he delivered.

James electrified the Portland crowd with back-to-back monster slams for his first points as a Laker, but ultimately he couldn’t prevent them from dropping their 16th straight game to Portland dating back to March 2014.

“It’s not instant oatmeal. It’s not that fast,” James said. “It takes some time to get that chemistry where you can just close your eyes and know exactly where guys are.”

The Lakers will play their first home game on Saturday against the Houston Rockets at Staples Center.

James opted out of his contract with Cleveland in the offseason and agreed to a four-year deal worth $154 million with the Lakers.

Against Portland, James shot nine-of-16 from the field in 37 minutes of playing time. Josh Hart added 20 points for the Lakers.

“There’s some things that we could do better. We can rebound a lot better, we had some turnovers, which I expected. Us just trying to get a feel for one another.”

Damian Lillard had 28 points and Nik Stauskas scored 24 points off the bench for Portland, which won its NBA record 18th straight home opener.

With the Lakers up 6-2 after baskets by Rajon Rondo, JaVale McGee and Brandon Ingram, James stole the ball from Portland forward Jake Layman and raced to the other end for a dunk.

The Blazers answered with a dunk of their own from Lillard. James immediately hit back, weaving through defenders for another emphatic dunk to record his second basket as a new Laker.

“They were thunderous,” Josh Hart said. “That gave us great energy. He’s the best player in the world for a reason. He showed that.”

The Trail Blazers were also playing with heavy hearts on Thursday following the death of owner and Microsoft co-founder Paul Allen. The 65-year-old Allen died on Monday from complications from Hodgkin’s lymphoma.

“We wanted to come out and start the season right and to honor our owner, Mr. Paul Allen. That’s what tonight was all about for us, not about the noise surrounding the game,” Lillard said.

With the Lakers, James does not have a strong supporting cast like he did when he left Cleveland for Miami eight years ago.

Lakers fans were intrigued to see how well James would mesh with his mostly younger teammates, and how much he can help them improve on their 35-47 record of a year ago.

James finished with six assists but at times he also looked out of sync with his new mates, such as when he tried a behind the back pass with 20 seconds left in the game to someone under the basket. No one anticipated the play and the ball ended up bouncing harmlessly into the stands.

He led the league in minutes for the second straight year, and he also made the all-NBA first team for the 11th straight season.

James appeared in the NBA finals for the eighth straight year, where the Cavaliers were swept by the Golden State Warriors.

He played with the Heat from 2010–2014, winning two championships there. He returned to the Cavaliers and won a championship in 2016 and was the NBA finals MVP for each of his wins.