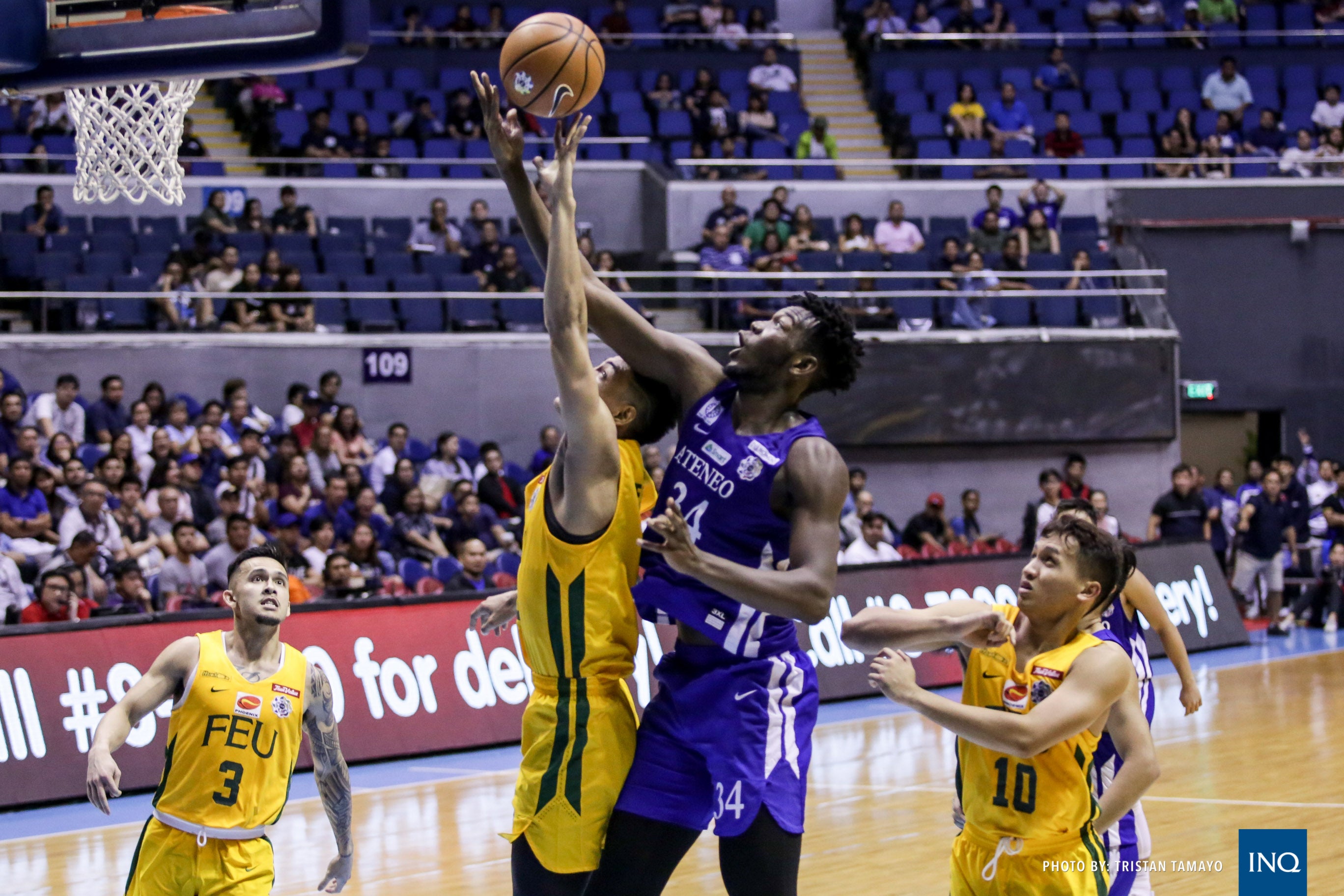 In one of the most dominant individual performances in recent memory, Kouame notched career-bests of 33 points and 27 rebounds as the Blue Eagles avenged their first round loss to the Tamaraws and remained on top with Adamson.

The Falcons drew inspiration from Sean Manganti to end three years of frustration against the La Salle Archers for a gritty 57-50 victory in the first game.

Playing with extra motivation, Manganti had 19 points and 12 boards against the same school that chose to ignore him after trying out five years ago.

“What you don’t know is they rejected Sean and we got him.”

It was the first win in seven tries against the Archers for Manganti, who took his rejection from La Salle as a source of motivation.

“This is the one,” said Manganti. “This is the biggest game for me personally. I’m so happy right now. I’m on top of the world. I came here [back when I was] Grade 11, I practiced with them and they didn’t talk to me. They treated me like nobody.”

The Falcons held the Archers to just two points in the first period. La Salle’s output is its lowest this season and its 26 percent shooting clip is the worst by any team.

“I’ve been stressing to the players that I don’t think we can outscore the other teams but one thing for sure, our calling card for this year is really trying to hold down the other team,” said Pumaren.

The wins proved critical for Ateneo and Adamson, both with 7-2 records, as they gained separation from FEU and La Salle, which dropped to 5-4.

The end of the weekend could see three teams tied for the third to fifth spots with University of Santo Tomas gunning for a fifth win in nine games against National U on Sunday at Filoil Flying V Centre.

“We took advantage of our opportunities,” said Ateneo assistant coach Sandy Arespacochaga. “FEU was locking down on our shooters so that’s why Ange was freed up.”

With FEU’s 6-foot-9 Nigerian center, Prince Orizu leaving the game due to an injury, the Tamaraws had no answer for the 6-foot-10 Kouame in the shaded lane.

Kouame, who made 15 of 18 shots, grabbed the most rebounds since Season 79 when Adamson’s Papi Sarr snared 25. The Ateneo center also scored the most points by an Ateneo player since Kiefer Ravena poured the same output four seasons ago.

Anton Asistio fired 15 points as the Eagles bucked the absence of Thirdy Ravena to suspension and Matt and Mike Nieto.

The Tamaraws fell to their second straight loss after a scintillating end to the first round. They were still in the game at 18-all, before Kouame helped Ateneo unleash a 16-4 burst to end the first half.