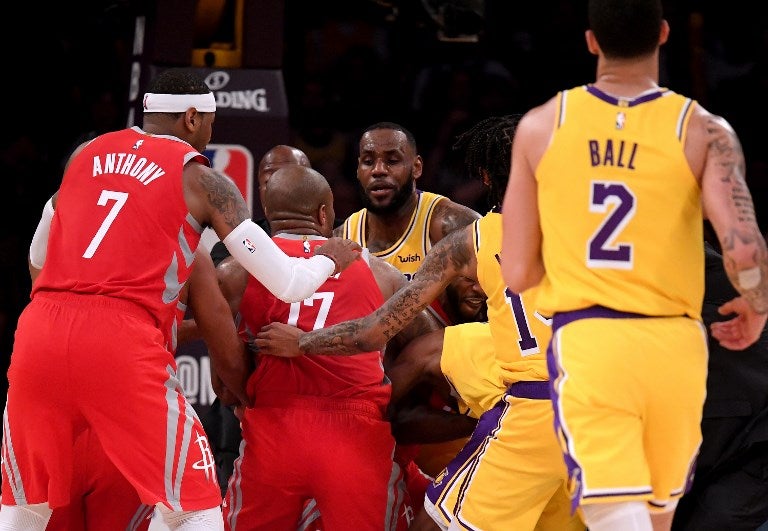 LeBron James’s home debut with the Los Angeles Lakers ended on a sour note Saturday as the Houston Rockets seized control late for a 124-115 win in a physical contest at Staples Center.

James finished with 24 points and five assists but the Lakers couldn’t stop the Rockets’ dynamic duo of James Harden and Chris Paul, who combined for 64 points at Staples Center arena.

Harden finished with 36 points and Paul delivered 28 and 10 assists before he was ejected in the fourth quarter for fighting.

“We were right there, we had an opportunity to win the game,” said James. “I am not disappointed at all. Nobody said it was going to be easy.”

The four-time NBA most valuable player James signed with the Lakers three months ago after leading the Cleveland Cavaliers to four straight NBA final appearances, including their first championship in 2016.

Saturday’s loss left James still searching for his first win as a Laker. In his season-opening game on Thursday in Portland, James scored 26 points in a 128-119 loss to the Trail Blazers.

“We will watch film tomorrow. It is one of our best teachers, being able to see some of the things we did wrong,” he said.

James was introduced to the sold out crowd of 19,000 by Lakers announcer Lawrence Tanter: “The other forward is number 23, his 16th campaign, St. Vincent-St. Mary High School, LeBron James!”

The Rockets scored the first seven points before James scored on his first shot attempt, cutting Houston’s lead to five two minutes into the game. James introduced himself to the Laker fanatics with an 18 foot pull up jumper.

A minute later he tried his first three pointer from 26 feet but it bounced away.

It was a more reserved start than the one he had on Thursday when he delivered back-to-back, rim-rattling dunks for his first two baskets to open his Lakers’ era.

On Saturday, he electrified the Staples Center crowd for the first time with a monster two-handed slam to tie the contest 14-14 halfway through the first quarter.

Paul was ejected along with Lakers Rajon Rondo and Brandon Ingram after they were involved in a wild melee that saw punches thrown on both sides.

“I saw it from a distance. It was very heated stuff,” said Rockets coach Mike D’Antoni.

Paul and Rondo were the main combatants trading blows after Paul stuck his finger in Rondo’s face and pushed him hard.

Rondo answered with a roundhouse left that would have made boxing champion Floyd Mayweather proud — the fighter was sitting courtside obviously enjoying the fireworks.

Paul then missed with a right but connected with a hard left of his own.

Ingram was given two technicals, one for starting the fiasco by pushing Harden in the back and the other for a sucker punch from behind on an unsuspecting Rockets player as he charged back into the kerfuffle for round two.

“It escalated pretty quickly but besides that I am happy we got our first win,” said Harden, adding that Paul said Rondo spit on him.

“As a man the only thing you can do is stand up for yourself.”

James played the role of the peacemaker, grabbing Paul from behind and dragging him away from the melee.

With the Lakers, James does not have a strong supporting cast he did when he left Cleveland for Miami eight years ago.

Lakers fans were intrigued to see how well James would mesh with his mostly younger teammates, and how much he can help them improve on their dismal 35-47 record of a year ago.

James joins a franchise that has missed the playoffs in each of their last five season, the longest playoff drought in franchise history for the 16-time NBA champions.

He is just the latest to come through that revolving door on the dressing room as the longest tenured player is 21-year-old Ingram.

James said the Lakers are a young team and it will take time to get better.

“We got a long way to go to get to the Rockets,” said James, adding they played better than in the first game.

He led the league in minutes for the second straight year, and he also made the all-NBA first team for the 11th straight season.

James appeared in the NBA finals for the eighth straight year, where the Cavaliers were swept by the Golden State Warriors.