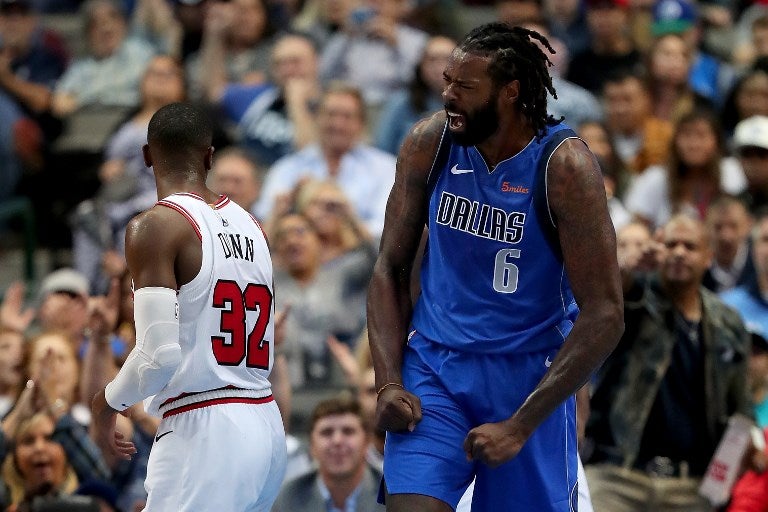 DeAndre Jordan #6 of the Dallas Mavericks reacts after scoring against Kris Dunn #32 of the Chicago Bulls in the third quarter at American Airlines Center on October 22, 2018 in Dallas, Texas. NOTE TO USER: User expressly acknowledges and agrees that, by downloading and or using this photograph, User is consenting to the terms and conditions of the Getty Images License Agreement. Tom Pennington/Getty Images/AFP

DALLAS — DeAndre Jordan became the first Dallas player in 24 years to start a season with three straight double-doubles, getting 18 points and 16 rebounds to help the Mavericks beat the Chicago Bulls 115-109 on Monday night.

Zach LaVine scored 34 for the Bulls and is the third Chicago player to open a season with three straight 30-point games. The others were Michael Jordan in 1986 and Bob Love in 1971.

J.J. Barea scored nine, including a long 3-pointer just before the third-quarter buzzer. The 30-footer, Barea’s only make in seven shots behind the arc, was part of a 14-2 run covering the third and fourth quarters for a 96-86 lead after neither team had been up by more than five.

Jabari Parker scored 20 points for Chicago but had just four after halftime as the Bulls dropped to 0-3 for the second straight year.

Chicago cut a 14-point deficit in the fourth quarter to five in the final minute, but Doncic, the third overall pick, collected a bad pass by No. 7 overall choice Wendell Carter Jr. in the backcourt after a Dallas miss and hit the layup.

The last Dallas player with three straight double-doubles to start a season was Popeye Jones in 1994.

There were 12 lead changes in the first half, including on seven straight buckets early in the second quarter. The last was on a 3-pointer by LaVine for a 47-45 Chicago lead. There were three more ties before halftime, with Cameron Payne hitting a floater in the final minute to put the Bulls up 61-59 at the break. The game finished with 17 lead changes.

Robin Lopez wasn’t happy with referee Sean Corbin’s explanation after the Chicago center was called for a foul when he got tangled with Dwight Powell in the first quarter. Lopez appeared upset that Corbin said he was “trying to help” the big man from Stanford, and Lopez used the word “platitudes” in his retort. The big word was preceded by an expletive, and Corbin signaled for a technical foul.

Bulls: Carter was badly overshadowed by Doncic in the matchup of top 10 picks from this year’s draft. He finished with four points, but did lead the Bulls with nine rebounds. … Justin Holliday scored 16 points, and Bobby Portis had 12.

Mavericks: Doncic became youngest Dallas player to record a 20-point game with 26 in his home debut, a 140-136 win over Minnesota. He beat Smith, who did it as a rookie last November, by 113 days. … Harrison Barnes (hamstring) and Dirk Nowitzki (ankle) are still awaiting their season debuts. Devin Harris missed a second straight game with a hamstring injury.

Mavericks: At Atlanta on Wednesday.