Cousins ejected while sitting on Warriors bench vs Knicks 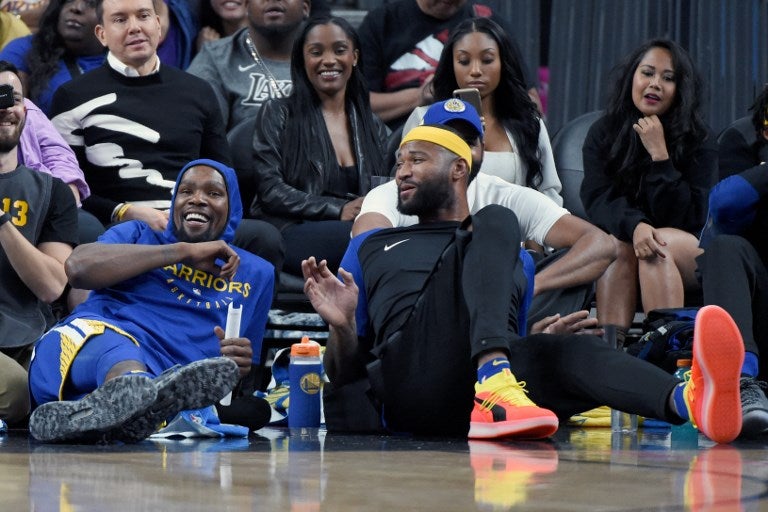 LAS VEGAS, NEVADA – OCTOBER 10: Kevin Durant (L) #35 and DeMarcus Cousins #0 of the Golden State Warriors share a laugh as they sit on a baseline during their preseason game against the Los Angeles Lakers at T-Mobile Arena on October 10, 2018 in Las Vegas, Nevada. The Lakers defeated the Warriors 123-113. Ethan Miller/Getty Images/AFP

NEW YORK — DeMarcus Cousins isn’t even playing for Golden State yet and he’s been ejected from a game.

Cousins was thrown out in the first quarter of the Warriors’ 128-100 victory over the New York Knicks on Friday night after arguing with referee Scott Foster.

Warriors coach Steve Kerr said Foster told him he had already warned Cousins and Knicks center Enes Kanter about their jawing with each other. Cousins then apparently directed his talking to Foster.

As play resumed following a timeout with 2:28 remaining in the period, it was announced that Cousins had been assessed a technical foul during the break, and then subsequently ejected.

“Cousins took exception to the ruling and during the timeout he was ejected for one technical foul for unsportsmanlike conduct,” Foster told a pool reporter.

Cousins was tossed after just one technical instead of the standard two, with Foster saying the officials felt that was enough for a player not in the game. Asked if the ejection was because of what Cousins said, Foster replied: “More so the way of which he stated what he stated.”

Cousins is still recovering from a ruptured Achilles tendon. He took part in his first practice with the Warriors on Thursday, but there is still no timetable for his return to action.