Djokovic aiming to take No. 1 ranking from Nadal in Paris 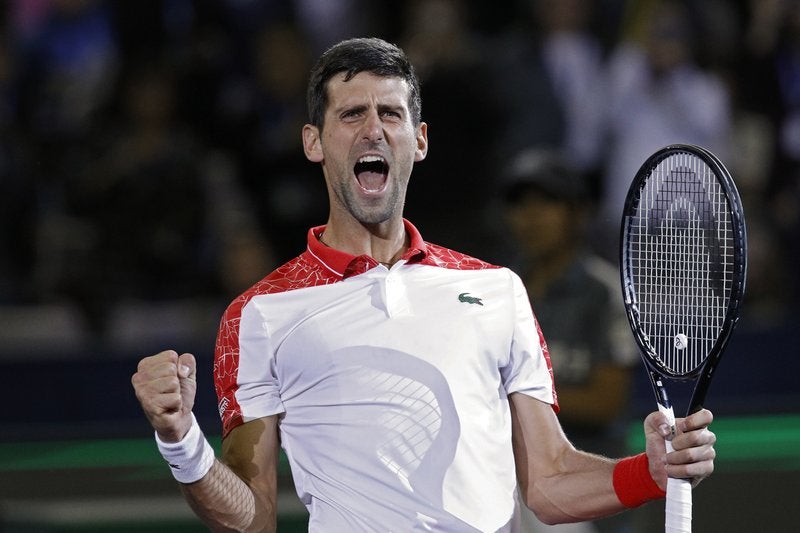 FILE – In this Sunday, Oct. 14, 2018 file photo, Novak Djokovic of Serbia celebrates after defeating Borna Coric of Croatia in their men’s singles final match in the Shanghai Masters tennis tournament at Qizhong Forest Sports City Tennis Center in Shanghai, China. Djokovic is in electric form heading into the Paris Masters, where he is well poised to wrestle back the No. 1-ranking from longtime rival Rafael Nadal. (AP Photo/Andy Wong, File)

PARIS — Novak Djokovic is in commanding form and well poised to wrestle back the No. 1-ranking from longtime rival Rafael Nadal at the Paris Masters.

Heading into the Paris event, which starts Monday, Djokovic was only 215 points behind Nadal at a tournament he has won a record four times, the last time in 2015. Nadal has never won here.

The two tennis greats have won a combined 31 Grand Slam titles, with Nadal ahead 17-14. But Djokovic appears to be on an ever-upward curve while Nadal is tentatively returning from a right knee injury.

Djokovic has won four of the last five tournaments he has entered, a strong run including Wimbledon, the U.S. Open and most recently the Shanghai Masters.

“In both the U.S. Open and Shanghai, I’ve played as good as ever,” Djokovic said Sunday at a news conference in Paris. “So I really enjoy tennis at the moment and enjoy competing. When you have a lot of confidence, you approach the practice sessions and the tournaments and the matches in a just completely different way.”

Djokovic feels he’s reaching the ultra-dominant level he was leading up to at the time of winning the French Open in 2016, which turned out to be his last Grand Slam title before a slump of two years without winning one.

In 2017, Djokovic’s level of play started dropping due to complications with an elbow injury. In January, he finally underwent right elbow surgery and, by the time he reached the French Open in June, his ranking had dropped to No. 22.

“It was quite opposite extremes in terms of how I felt and how I played five months ago and today,” Djokovic said. “I do think that I’m playing at my best at the moment (now). I always feel like I can improve, but I feel like this is a very high level.”

Djokovic has a bye into the second round in Paris. The Serb will face either Joao Sousa of Portugal or Italian Marco Cecchinato, who upset Djokovic at Roland Garros in the French Open quarterfinals.

Djokovic’s third Shanghai title moved him onto 72 for his career, eight behind Nadal. Roger Federer collected his 99th title after winning the Swiss Indoors on Sunday.

Nadal, meanwhile, is optimistic his right knee has recovered well. He retired in the semifinals of the U.S. Open against Juan Martin del Potro in early September. He then skipped the Asia swing to recover, missing tournaments in Beijing and Shanghai.

“I am happy to be here. I am having better feelings on court. I am practicing a little bit more every day,” Nadal said Sunday. ”(It) is nothing new for me. Something that happened in my career a couple of times. So more or less we know the process.”

The Spaniard has a bye to the second round, where he faces either countryman Fernando Verdasco or Frenchman Jeremy Chardy.

The 32-year-old Nadal could face defending champion Jack Sock in the third round, and potentially Borna Coric or sixth-seeded Dominic Thiem in the quarterfinals.

Considering he is returning from injury, Nadal is cautious about his chances.

Federer, who beat qualifier Marius Copil of Romania for his ninth title in Basel, has yet to confirm he will play in Paris.