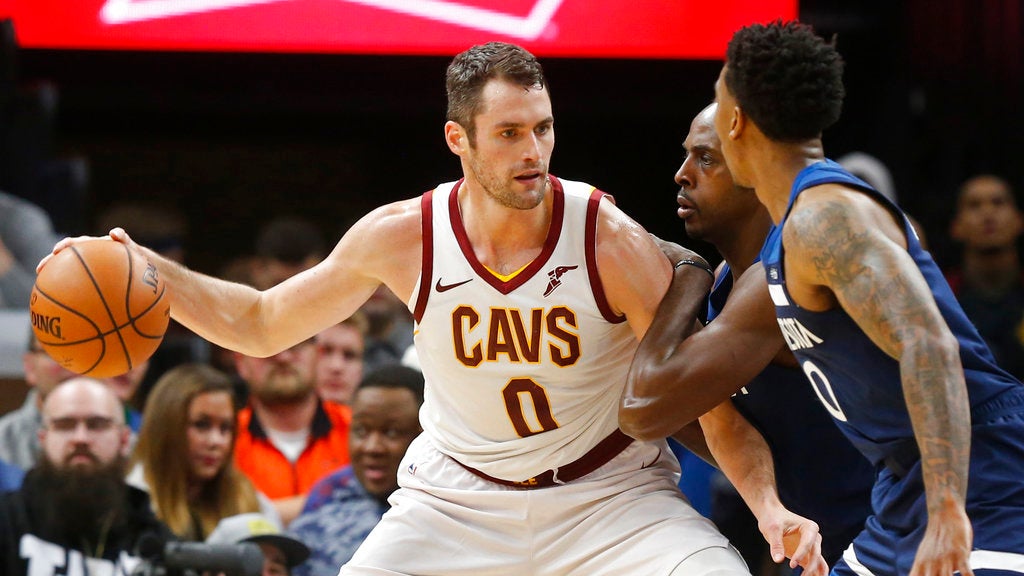 FILE – In this Oct. 19, 2018, file photo, Cleveland Cavaliers’ Kevin Love, left, is double-teamed by Minnesota Timberwolves’ Anthony Tolliver and Jeff Teague, right, in the first half of an NBA basketball game, in Minneapolis. Love could miss significant time with a foot injury that has bothered him since the preseason. Love will sit out his third straight game on Tuesday, Oct. 30, 2018, as the winless Cavs host Atlanta and look to end a six-game winless streak to start the season. (AP Photo/Jim Mone, File)

The All-Star forward said Tuesday night that he will miss at least several weeks with a painful left toe injury that has bothered him since the preseason and recently got so severe that he had trouble walking. He did not rule out surgery.

The 30-year-old had an MRI and visited Dr. Martin O’Malley at the Hospital for Special Surgery in New York. He’s been told to rest the injury, and there is no clear timetable when he’ll play again.

“I would like to get back obviously as soon as possible,” said Love, who has been wearing a walking boot on his left foot for the past few days. “I had high hopes for the season, I know it’s been off to a really rocky start, but the more I can be out there and help this team, the better. So I’m hoping to get out there as quickly as possible and hoping that it’s only two or three weeks.”

Love missed his third straight game Tuesday as Cleveland hosted the Atlanta Hawks. The Cavs entered the game 0-6, and the four-time defending Eastern Conference champions are reeling after coach Tyronn Lue was fired Sunday. Compounding the slow start, the Cavs are still working through contract negotiations with assistant Larry Drew, who wants more security before he takes over and said he’s “very disappointed” the team has not given him a new deal.

Love said he first injured his toe during the preseason opener against Boston on Oct. 2. He then missed the club’s final three exhibitions.

He pushed through the pain for Cleveland’s first four regular-season games, but struggled with his shot while overcompensating for the injury. Love has been frustrated by not being able to play, but knows he has to obey doctor’s orders.

“The only way I’m going to be best for this team is to be healthy, and I haven’t been the last month,” Love said. “It’s disheartening. I want to be out there.”

The injury makes things even tougher on the Cavs, navigating through their first season since LeBron James left for the second time. Before he finally decided to stop playing, Love was making only 32 percent of his shots while averaging 19.0 points and 13.5 rebounds.

Love wasn’t sure exactly when he got hurt — or how.

“When I got back to the plane where I had trouble walking, so it was all really management,” he told reporters. “I was able to go out there and play in some pain. I was trying to fake it around you guys in the locker room and not show too much, but it was the other 21 or so hours out of the day where I was in a lot of discomfort. That was weighing on me as well as not feeling like myself and not really being able to get in shape in practice because I wasn’t really able to do too much.”

Love has been injury prone in recent years, missing 45 games over the past two seasons.