Djokovic and Federer win to set up Paris Masters semifinal 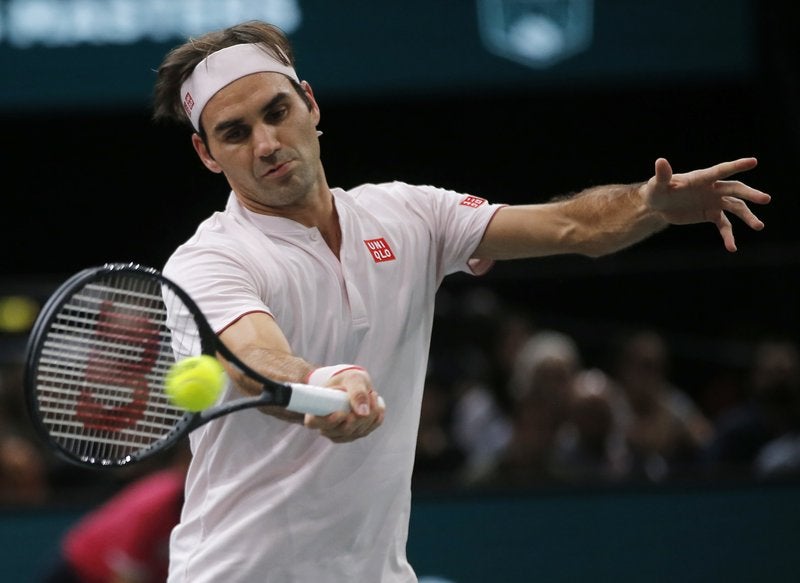 Roger Federer of Switzerland returns the ball to Kei Nishikori of Japan during their quarterfinal match of the Paris Masters tennis tournament at the Bercy Arena in Paris, France, Friday, Nov. 2, 2018. (AP Photo/Michel Euler)

PARIS — Novak Djokovic remains on course for a fifth Paris Masters title after beating Marin Cilic 4-6, 6-2, 6-3 on Friday to set up a semifinal against Roger Federer.

Federer advanced to their 47th career meeting by beating Kei Nishikori 6-4, 6-4, his sixth straight win against the Japanese player.

Chasing his 100th career title after winning the Swiss Indoors last Sunday, the 20-time Grand Slam champion was hardly troubled. He saved a break point with a sharp volley at the net when serving for the set at 5-4 and then broke Nishikori at the start of the second set to take firm control.

Federer has won this tournament only once, back in 2011, and has not played here since 2015. He was given a huge ovation by the crowd after his win.

Now he has to find a way past Djokovic, the Wimbledon and U.S. Open champion who has beaten Federer in their past three meetings and leads him 24-22 overall.

“If the crowd is for Novak that’s also good, as long as the (arena) is full. I know I have fans here, I can’t complain,” Federer said. “I have an enormous amount of support around the world. But for my fans to get into the match, I also have to play some good tennis.”

Federer lost to Djokovic most recently in the Cincinnati Masters final in August.

“I hope I play better than in Cincinnati because I really didn’t play well,” Federer said. “It was the worst day of my career for returning. I missed all the second returns.”

Djokovic, who is guaranteed to take the No. 1 ranking on Monday, struggled on his serve for much of the first set.

Cilic had chances to break him in the fifth and seventh games and finally did so in the ninth when Djokovic hit a backhand long.

An ace gave Cilic set point and he took it when Djokovic sent a backhand wide.

Djokovic broke for 3-1 in the second set and did not look back.

In the third set, a Cilic cross-court forehand winner saw him break a for 2-1 lead.

Djokovic broke his racket in frustration and then broke Cilic straight back, after which the momentum shifted back in his favor as Cilic lost to him for the 16th time in 18 meetings.

“It was a very intense match,” Djokovic said. “I was kind of going up and down. I’m really pleased to overcome this kind of challenge.”

It was also Djokovic’s 21st consecutive win since losing to Stefanos Tsitsipas in the third round of the Rogers Cup in August.

The Austrian served out the match and clinched victory on his first match point when Sock hit a big forehand long.

“I’m in the semifinals of a Masters 1000 only for the fourth time,” Thiem said. “It means a lot for me because I didn’t do too well in the previous years in this part of the season.”

The sixth-seeded Thiem next faces unseeded Karen Khachanov of Russia in their first career meeting.

Zverev had treatment on his right shoulder late in the first set and made a string of unforced errors. He took exception to some comments made in Khachanov’s box and spoke to his opponent at the end of the first set.

“I told him my shoulder is hurting and that his uncle, or something, that he’s going a bit crazy,” Zverev said. “I told him to tell him to keep it down a little bit because he was going a little bit too much over the edge.”

Cilic and Thiem sealed the last two spots for the season-ending ATP Finals in London, starting on Nov. 11.