The UAAP Season 81 men’s basketball tournament is back in full swing after a week of inactivity due to the break to accommodate All Saints’ Day and All Souls’ Day.

All eight teams were able to play just once in the weekend at a new venue, Ynares Center in Antipolo, and it was a pretty much an uneventful two days of basketball.

There wasn’t much movement at the top three spots with Ateneo, Adamson University, and De La Salle maintaining their positions.

There were, however, some switches in the fourth to sixth seeds with University of the Philippines and Far Eastern University sharing the No. 4 spot while University of Santo Tomas fell to No. 6.

Well, enough of that, here are the players who shone the brightest in the higher altitudes of Antipolo. 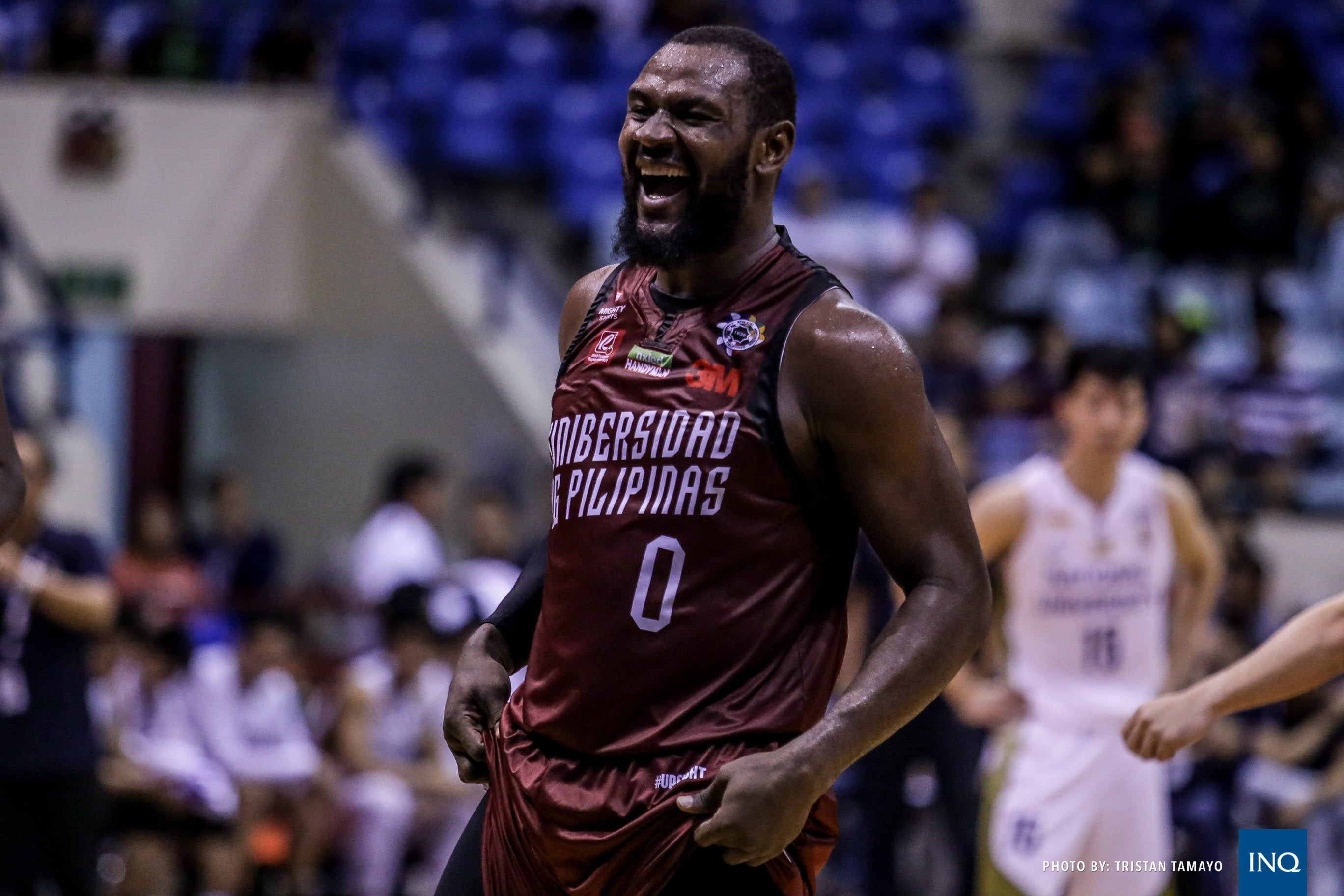 University of the Philippines needed a big boost coming into Week 8 after it fell out of the top four spots before the break.

So there came center Bright Akhuetie who was in his usual self for the Fighting Maroons—being that big guy down on the block to patrol the paint.

Akhuetie dominated National University’s bigs in UP’s 82-71 win to get to a 6-6 standing.

He put in 21 points and 10 rebounds for the Fighting Maroons and his production alone eclipsed what Troy Rike and Issa Gaye mustered as NU’s center duo who put up a combined eight points and eight rebounds. Arvin Tolentino’s stay in Season 81 has been polarizing at best, that at one point he’s one of the best forwards of the year and on the other he’s been sitting out games due to suspensions.

FEU’s sweet-shooting Tolentino was suspended for a total of three games after incurring two suspensions and that the league warned him that if he’s called for one more disqualifying foul he will be banned for the remainder of the tournament.

Tolentino has since looked to be a good trooper not only for the Tamaraws but also for the league as he has been scot-free since his return.

And on FEU’s 80-61 victory over University of the East, Tolentino was back in his element.

Tolentino put up an efficient 18 points on 7-of-12 shooting while also pitching in some dirty work of five rebounds, two steals, and one block.

So far, Tolentino averaged 19.5 points in his first two games since he came back. He played in Season 79 for limited minutes and was cut from the team in Season 80.

It wasn’t until Season 81, specifically in the Green Archers’ 110-69 win over UST, that Dyke showed he’s a solid force on all fronts.

Dyke emerged from his shell and put up 16 points, on 5-of-8 shooting, with six rebounds and a block in a game that had some extra curricular events.

La Salle’s forward said he was the subject of alleged racist taunts, on top of some hard physical play, from the Growling Tigers.

Whatever may have happened on the court, Dyke got through it and put in the performance of his collegiate career. There was just no stopping Aljun Melecio from creating havoc on UST’s broken defense.

La Salle’s blazing guard waved away the cold Antipolo air and lit the Growling Tigers up to the tune of 26 points, the most in Week 8, in 5-of-15 shooting fro three-point area.

What made Melecio’s scoring even more impressive was he did it in just 23 minutes and he didn’t even need to score in the final quarter. Paul Desiderio’s mythos had pretty much died down in Season 81.

He had his moments last season especially  when he shouted, “Atin ‘to! Papasok ‘to!” before hitting a clutch three against UST in UP’s 74-73 win in that year’s opening weekend.

Desiderio also exploded for 30 points against Ben Mbala and the Green Archers in the Fighting Maroons’ 98-87 win in the first round of Season 80.

All those moments, though, were in 2017 and Desiderio needed one to bring life into his Season 81 and he did that against NU.

Desiderio had four points in the first three quarters and was even scoreless in the first period before coming alive in the fourth.

His line of 12 points, four rebounds, four assists, and two steals weren’t gaudy but his guts were.

Desiderio scored eight points in the fourth quarter alone including the dagger that gave UP the 80-71 lead with 37.1 seconds remaining. Kenneth Tuffin is that person on the roster who has all the qualities of a star but not exactly the brightest of all.

But make no mistake, Tuffin is a reliable forward, it’s just that he hasn’t grabbed headlines that much.

On Sunday, though, Tuffin made a claim that he should be one of the best forwards in all of the UAAP since he is part of 23 players listed for the potential Philippine team that will compete in the 2023 Fiba World Cup that the country will host.

Tuffin was on fire for the Tamaraws against the Red Warriors scoring 17 points on 5-of-8 shooting, all of which, came from three-point area while also grabbing four rebounds and tallying a steal and a block. UP’s sophomore has taken a liking to stuffing stat sheets every time he gets.

Juan Gomez De Liaño, Season 80’s Rookie of the Year, did put up the first triple-double the UAAP has seen in more than a decade and he almost did it again on Sunday against the Bulldogs.

De Liaño had 10 points, nine rebounds, and seven assists in a game the Fighting Maroons desperately needed to win.