Lions close in on NC crown 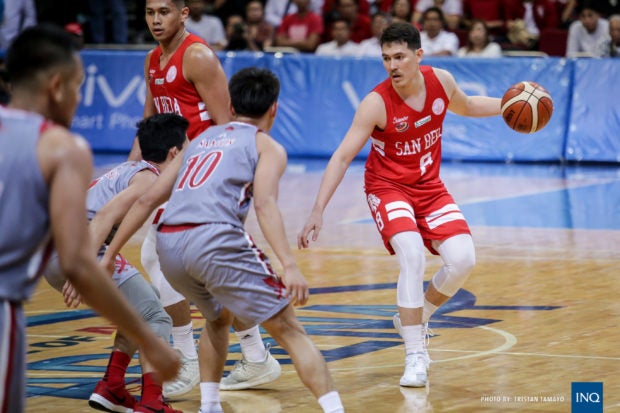 A series that was expected to go down the wire until one of the protagonists’ best player was frozen by a suspension could turn out to be a quick coronation for San Beda.

Unrelenting even after a strong start, the defending champion Red Lions pounced on the absence of CJ Perez to overwhelm the Lyceum Pirates, 73-60, on Tuesday and move on the cusp of the NCAA Season 94 seniors’ crown at Mall of Asia Arena.

Graduating stars Javee Mocon and Robert Bolick spearheaded the Lions’ charge, but the absence of Perez due to suspension was clearly felt by Pirates, who looked out of sync in the first two quarters.

Perez, last season’s Most Valuable Player, was suspended in Game 1 for not seeking the league’s permission in writing when he applied for the PBA Draft last week. The decision was handed down by the league only late Tuesday, leaving the Pirates in a bind.

“Even without CJ, we only beat them just by 13 points,” said San Beda coach Boyet Fernandez. “But I credit the players for showing up today.”

The Lions held the Pirates to just 22 points on 35 percent shooting in the first half, before extending their lead to 27 points in the second half.

The Pirates trimmed the gap to just 10 in the dying seconds with the outcome already settled.

“We feel sorry for CJ and Lyceum, but for sure they will come back stronger,” said Fernandez.

“They (Lyceum) lost their No. 1 scorer. Lyceum with or without CJ is still capable of beating our team and we only achieved winning Game 1. This is just buffer for us going into Game 2. I have so much respect for Lyceum that’s why I hope it’s a wake-up call for the team we cannot really relax.”

Mike Nzeusseu finished with 16 points and grabbed 14 rebounds, while twins Jaycee and Jayvee Marcelino chipped in 13 points each for the Pirates, who also lost to San Beda in the finals last year.

But Pirates coach Topex Robinson remained defiant in defeat, pointing to their second-half performance as an encouraging sign as they await Perez’s return on Monday’s Game 2.

“There’s still a lot of fight left in us,” said Robinson. “We’re excited to have CJ back in Game 2.”

Bolick also issued nine of San Beda’s 19 assists as the Lions had 11 players on the scoreboard. The mercurial guard vowed they’ll be ready for the Pirates’ fightback.

“We love to compete,” said Bolick. “So they’ll just have to bring it on. We will not back down until we win that championship.”

Set to be awarded as MVP of the juniors division on Monday, Joel Cagulangan powered La Salle Green Hills to a 74-69 triumph over Mapua in Game 1 of their best-of-three finals series.

It will mark the first time in four years that a player from Perpetual Help won the MVP after Scottie Thompson pulled off the feat in 2014.

Joining Eze in the mythical five are Donald Tankoua of San Beda, Bolick, Mocon and Bong Quinto of Letran.