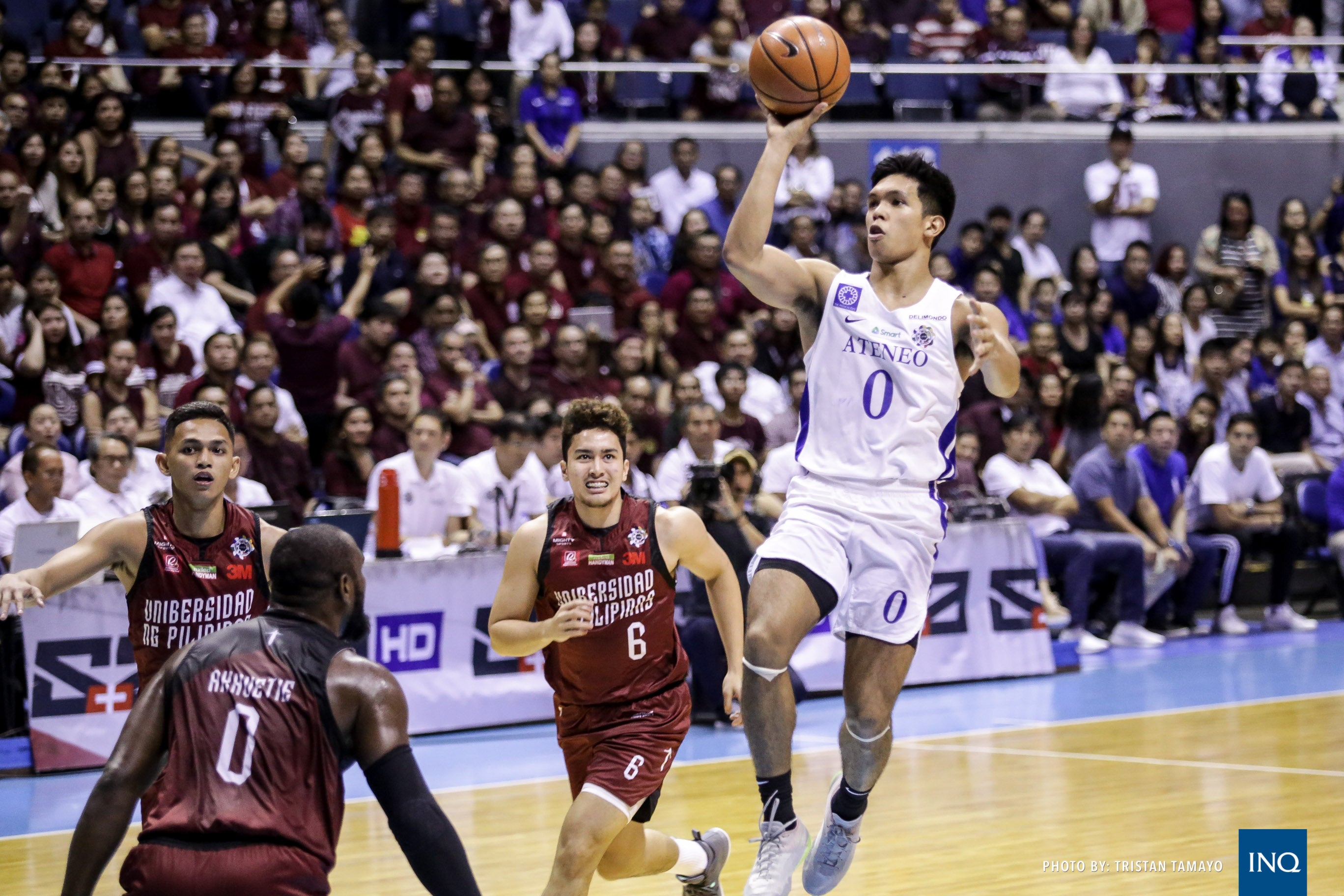 To get to the grandest stage in collegiate basketball, you have to be really, really good. That’s exactly what University of the Philippines was.

But Thirdy Ravena reminded everyone in a resounding manner what was nearly lost in the dramatic rise of another threat from Katipunan: Ateneo was simply way, way better.

The Blue Eagles, spurred by yet another masterful show of all-around brilliance from the indefatigable Ravena, destroyed the hard-fighting Maroons, 99-81, Wednesday night to clinch their second straight UAAP men’s basketball crown and prove to the mammoth crowd at Smart Araneta Coliseum the one fact that was obvious from the start.

Except for some parts in the season where it came undone, Ateneo was simply untouchable this year.

Ravena, who nearly constructed a triple double en route to demolishing UP’s hopes in Game 1, came through with a scoring virtuoso for the Blue Eagles in  Game 2, dropping 38 points on the Maroons.

“We knew that they wouldn’t go down without a fight,” Ravena said of UP in Filipino. “They’ve come so far, that’s why we knew they were no pushovers.”

“[Ateneo] coach Tab [Baldwin] told us that we can’t have let-ups, that we can’t be casual. So we just gave it everything we had,” he added.

So for good measure, he threw in five rebounds, six assists and three steals. He was named Finals MVP after spearheading a second half assault that had Ateneo leading by as many as 22 points.

“I just think Thirdy had one of those games—real special game. Ball’s falling, he made shots, made great decisions. He proved today what a special player he could be,” Baldwin added.

Indeed, Ravena always seemed to find another gear when Ateneo needed it most. He came up huge late in Game 1 when UP threatened to ride the wave of momentum from a dramatic semifinal victory into a Finals upset. He lowered the hammer in Game 2 with 18 points in the final period, including three hits from beyond the arc that sucked the fight out of the Maroons.

“My mission was to give everything I can,” said the talented swingman. “I didn’t really expect to score. It just came—the looks set up by teammates. If not for them, those wouldn’t be possible anyway.”

Angelo Kouame also had a big game for the Blue Eagles with 22 points, 21 rebounds and two blocks.

Juan Gomez de Liaño finished with 24 points and eight boards while season MVP Bright Akhuetie had 19 points and seven rebounds but neither was really a factor once Ateneo’s seamless system kicked in.

The game was delayed at the start for several minutes over the type of brace Akhuetie wore to protect his left knee, which he hyperextended in the third period of Game 1.

Akhuetie eventually decided to play without it.

The delay hardly affected the Eagles, and as they finally began celebrating, UP coach Bo Perasol admitted the wide disparity between both squads as he huddled the Maroons one last time this season.

“I told them we cannot be focusing on what just happened,” he said. “Right now, after the game, we have to focus on the whole season. We cannot just be myopic and say ‘Hey, we lost the game.’ Of course, we lost the finals. But I think all along, we became champions in our right.

“There’s no question we lost to a better team. They were better than us. There is no way we could’ve won against that team if we played the same.”

And that team isn’t done yet.

“We’ll try and build a team that could win a championship again,” Baldwin said. “But we’ll  focus on our day-to-day. It served us pretty well the last three years and I don’t see any reason to change our philosophy.”