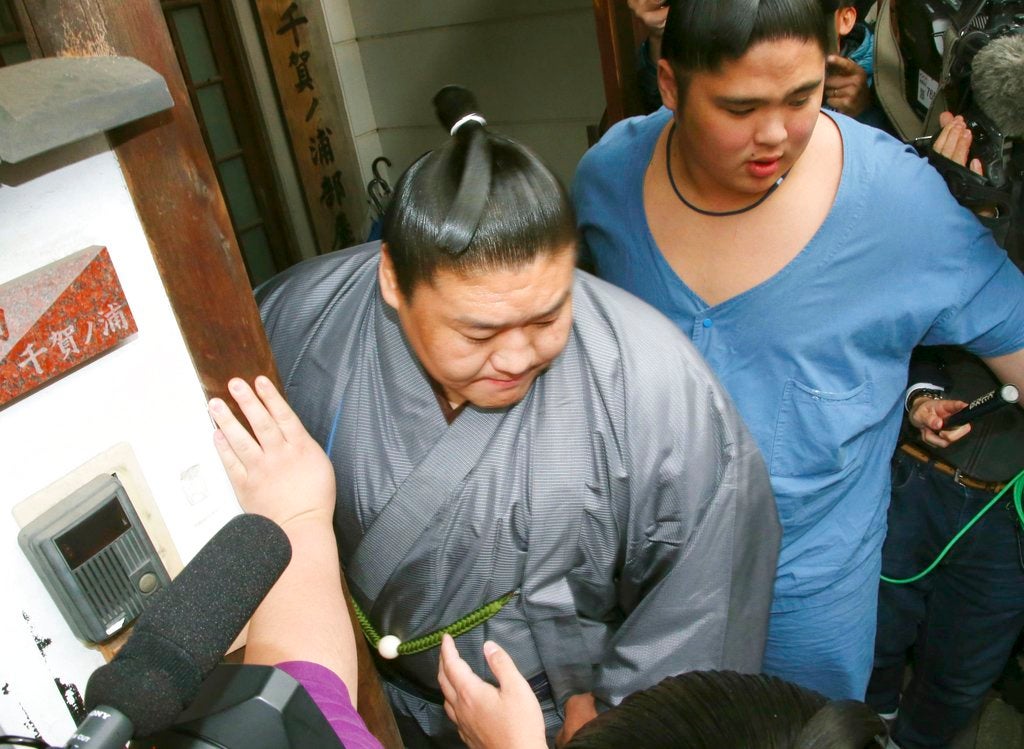 Sumo wrestler Takanoiwa, center, leaves his sumo stable master’s building in Tokyo, Friday, Dec. 7, 2018. The Mongolian wrestler has decided to retire after assaulting a younger wrestler during the ongoing regional tour in the latest blow to Japan’s national sport.(Kyodo News via AP)

TOKYO — Mongolian sumo wrestler Takanoiwa has decided to retire after assaulting a younger wrestler during the ongoing regional tour in the latest blow to Japan’s national sport.

Takanoiwa, 28, who last year was a victim of assault that led to the resignation of compatriot and grand champion Harumafuji, hit a lower-ranked wrestler at a hotel in Fukuoka on Tuesday, the Japan Sumo Association said.

The wrestler did not sustain a major injury but has swelling on his face after being hit four or five times with an open hand and fist, the JSA said.

Takanoiwa, whose real name is Adiyagiin Baasandorj, was hit with a remote control device in a bar by fellow Mongolian Harumafuji on Oct. 26 last year, which led to the grand champion’s retirement the following month.

Sumo has been rocked by a series of scandals in recent years as it attempts to maintain its popularity.

Read Next
Jazz shut down Rockets for 118-91 victory
EDITORS' PICK
House energy committee chair Arroyo bats for cheap electricity
Honolulu Café is the cure for your Egg Tarts and Roastings cravings
Luxe property: A way to build, preserve wealth
PH detects local transmission of Omicron subvariant BA.2.12.1
Petition to reverse Comelec decision on Bongbong Marcos’ DQ case reaches SC
OVP: Pilot’s claim vs Robredo ‘never happened’, a ‘malicious fabrication’
MOST READ
Man posing as Marcos spox revealed to be an inmate in Bilibid — Guevarra
Heart Evangelista gets a ‘no’ from Chiz Escudero after asking, ‘Do I deserve a bag?’
Congress canvassing of votes for president, VP to begin May 24
3 Iloilo residents found with Omicron subvariant
Don't miss out on the latest news and information.