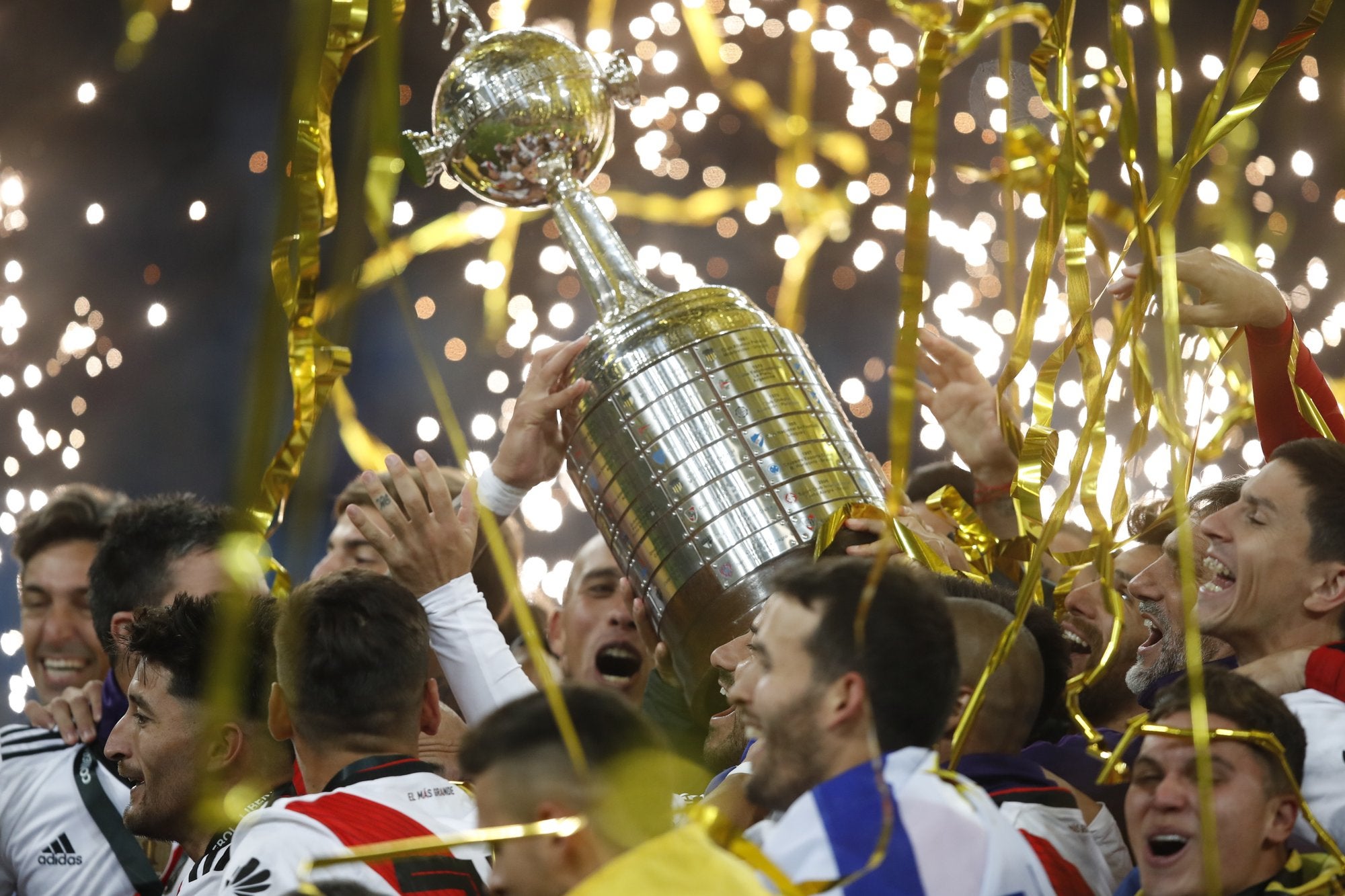 MADRID — Madrid turned into Buenos Aires for a night Sunday, with tens of thousands of Argentine fans transforming Real Madrid’s Santiago Bernabeu into a stadium of their own.

River Plate fans were the only ones celebrating in the end, both at home and in Spain, after the historic victory over fierce rival Boca Juniors in the twice-suspended final of the Copa Libertadores.

River came from behind to beat the rival 3-1 in the second leg after extra time to win South America’s equivalent of the Champions League 5-3 on aggregate.

One of the most anticipated matches in South American soccer finally came to a conclusion, nearly a month after the first leg was played in Argentina.

The final capped one of the most embarrassing chapters in South American soccer, which saw its leaders unable to stage the historic match on the continent. The second leg had to be played in the Spanish capital after it was marred by fan violence in Buenos Aires two weeks ago, when Boca players were injured before the game after River fans attacked the team bus with rocks, bottles and wood.

Soccer great Lionel Messi and FIFA President Gianni Infantino were among those at the “superclasico” at the Bernabeu, which saw the Argentine fans chanting throughout the match in a unique scene at the traditional European stadium.

It was River’s fourth Copa Libertadores title, and first since 2015. Boca Juniors remained on six titles and missed a chance to tie Argentina’s Independiente as the competition’s most successful club.

“River was the better team throughout the entire tournament,” said Matias Biscay, River’s assistant coach who replaced the suspended Marcelo Gallardo. “Our team played against the toughest opponents and knew how to overcome them. And in the final against our rival we were superior in both matches.”

After reaching 1-1 after 90 minutes on Sunday, River went ahead when Juan Fernando Quintero scored four minutes into the second half of extra time, and Gonzalo “Pity” Martinez added a third goal in the final minutes of the high-profile match.

Dario Benedetto had opened the scoring in normal time just before halftime for Boca, and Lucas Pratto equalized for River in the 67th.

Boca had Wilmar Barrios sent off early in extra time and then had Fernando Gago leave the field near the end because of an injury.

Rival fans were separated for security reasons with more than 25,000 from each club expected at the Bernabeu, and many making the expensive trip from Argentina. Only supporters of the home team were allowed in the matches in Argentina to avoid fan violence.

It wasn’t a full house, though, with 62,000 attending the match at the around 80,000-capacity stadium. There were empty sections behind both goals.

“It’s difficult to talk about the fans right now,” Boca Juniors coach Guillermo Barros Schelotto said. “We couldn’t win the Copa for them. They endured a lot to come here from all different parts of the world. It was incredibly sad in the changing room. It hurts a lot for me not to win the Copa, especially because of the fans.”

Quintero scored with a shot from the edge of the area after a well-coordinated attack past the Boca defense. Martinez allowed the celebrations to begin when he scored into an open net in the final seconds as Boca goalkeeper Esteban Andrada had gone to the opposite area to try to equalize on a corner.

Just seconds earlier, Leonardo Jara had a chance to score for Boca and send the match into a penalty shootout, but his shot struck the post to the desperation of the team’s fans.

Benedetto had opened the scoring with a beautiful goal on a counterattack in the 43rd. After receiving a superb throughball from midfielder Nahitan Nandez, Benedetto cleared a defender and entered the area with only goalkeeper Franco Armani to beat, then calmly finished with a shot into the corner. He appeared to taunt a River player as he ran to celebrate with his teammates.

River got the equalizer after a pass from Ignacio Fernandez to Pratto, who scored with a low shot from near the penalty spot.

The Nov. 24 second leg was initially postponed for one day after the Boca team bus was attacked outside River’s Monumental Stadium. South American soccer governing body CONMEBOL eventually said the game couldn’t be played in Argentina because of security concerns.

The match in Madrid was played amid strict security measures. Supporters from both clubs took over the city streets throughout the weekend and had been near the Bernabeu since early Sunday.

No major incidents between fans had been reported in the city, which was picked from several bidders in part because it has one of the largest Argentine populations outside of Argentina.

Spanish authorities said a 68-year-old fan had a heart attack while going to the match and was hospitalized in critical condition.

River fans celebrated the title at the Obelisk in downtown Buenos Aires, and the ones in Madrid were expected to take the team’s red-and-white colors to an iconic plaza in the capital.

With the victory, River Plate will represent South America in FIFA’s Club World Cup this month.