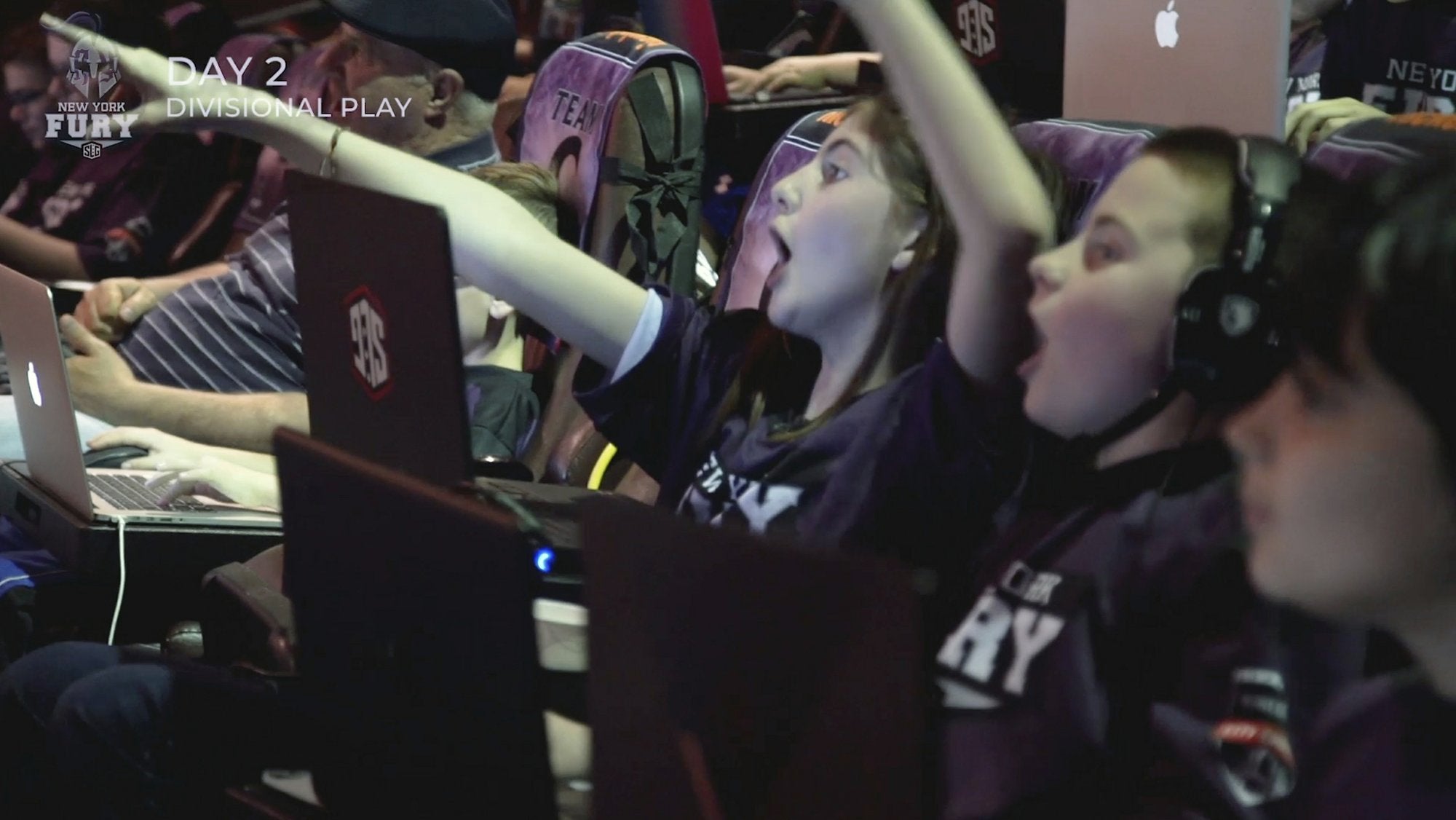 In this Saturday, Nov. 17, 2018, image provided by Super League Gaming, New York Fury team competitors react during a Super League Gaming competition against a team from Boston at City Center 15 Cinema de Lux in White Plains, N.Y. Super League is trying to bring structure to an industry devoid of it at the youth level. The league was founded in 2015 and has teams in 16 cities for its three gaming titles: “Minecraft” for younger players, and “League of Legends” and “Clash Royale” for players as old as their mid-30s. (Maria Gambale/Super League Gaming via AP)

WHITE PLAINS, N.Y. — Christian Pineda plays a lot of video games, but he’s best at “Minecraft.” Hunched over a laptop in the front row of a half-full movie theater last month, the 13-year-old eagerly showed off why.

“I basically know the controls like the back of my hand,” he said before turning his focus back to a tight match against a rival team from Boston. Christian claims to be shy at school, but here, he’s a vocal leader on a New York team of nearly 20 esports competitors, some as young as 6 years old. With a spot in the league finals on the line, Christian tapped away at his keyboard and excitedly discussed tactics with teammates.

The group was strategizing over pickaxes and archers, not pitchers and catchers, but the focus on teamwork and communication could have come straight from the bench at a youth baseball game.

At Super League Gaming events like this, that’s the goal.

Super League is trying to bring structure to an industry devoid of it at the youth level. The organization was founded in 2015 and runs national leagues for three esports games: “Minecraft” for players in elementary and middle school, and “League of Legends” and “Clash Royale” for older players. Kids are often introduced to competitive video games via “Minecraft” before graduating to “League of Legends,” giving them a place to train and play throughout their teenage years and beyond — the “League of Legends” competitions don’t have an age limit. Super League Gaming has tens of thousands of players, although not all attend every live event, and its “Minecraft” championship has been turned into a reality TV show on Nickelodeon.

The hope is that Super League can close a major gap in the esports ecosystem for young gamers, particularly in the U.S. The industry is set to eclipse $1 billion soon, and there are more professional opportunities than ever. Pros in the NA LCS — the top North American “League of Legends” circuit — averaged over $300,000 in salary this season, and many colleges now provide esports scholarships. Careers in esports coaching or game design are increasingly in demand, too.

But to pursue those jobs, players need to start early. Esports pros often peak in their early 20s, and elite talents in countries like South Korea are being identified before reaching middle school.

The relatively weak U.S. gamer pool is holding back North American franchises from competing on an international stage. Esports powerhouse Cloud9 became the first NA LCS club to even make the semifinals at the League of Legends World Championship this year, and it only had one U.S. player in its starting lineup. The lackluster American feeder system was a talking point when NA LCS franchise owners met this summer.

“A lot of our amateur system has fallen away,” said NA LCS Commissioner Chris Greeley. “I think we all agree that it is shallower right now than it could be and should be.”

Riot Games, which publishes “League of Legends” and manages its professional circuits, is partnered with Super League and hopes the organization can boost the reputation of American gaming. Super League uses proprietary software to pair players with competition at the appropriate skill level, and its weekly in-person events allow for stronger development than if players were left to practice alone. Super League also makes it easier for pro franchises to scout players and evaluate their talent and makeup.

“You can’t really just look at the best players online and use that as your primary way to find the next great pro because the problem is that you don’t know a lot about their behaviors,” Hand said. “Will they be able to handle the pressure of being at the Staples Center or Madison Square Garden?”

Just like Little League, it’s not strictly about churning out elite talent. Super League also creates an in-person sense of community around gaming, one that allows parents to watch and even coach. Some have concerns about their kids spending too much time on screens, but at least with Super League, gaming happens in a social, supervised space — better than playing solo in a basement or bedroom.

“It’s one of the best decisions we’ve made,” said Alon Rothschild, who drives his 11-year-old son, Frankie Capello, over an hour from Staten Island to compete with New York’s “Minecraft” team.

The co-ed organization provides players with uniforms, tech support and access to its digital platform, which allows players to log into Super League competitions from anywhere. But it’s the in-person events that pull kids in.

“You’re actually sitting next to each other and you’re talking,” Frankie said. “When you’re talking, you basically are getting the better experience with your friends. I love talking with my friends and doing this.”

The league hasn’t turned out any professional players, though it’s taking steps to ramp up its gamer development. It has created a training program within its software for at-home use and is offering boot camps focused on helping players improve. Hand wants to begin hiring former professional gamers to coach at Super League events, too.

Super League is also eyeing expansion into games like “Fortnite.” Although Super League’s player base is believed to be the largest of its kind in the U.S., it still represents a sliver of the gaming world, leaving a lot of room for growth before Super League is as synonymous with esports as Little League is with baseball.

Getting there could be a boon in an already booming industry.

“A kid who does play Little League is an MLB fan for life,” Hand said. “Cultivating that future fan through our youth leagues is really essential.”