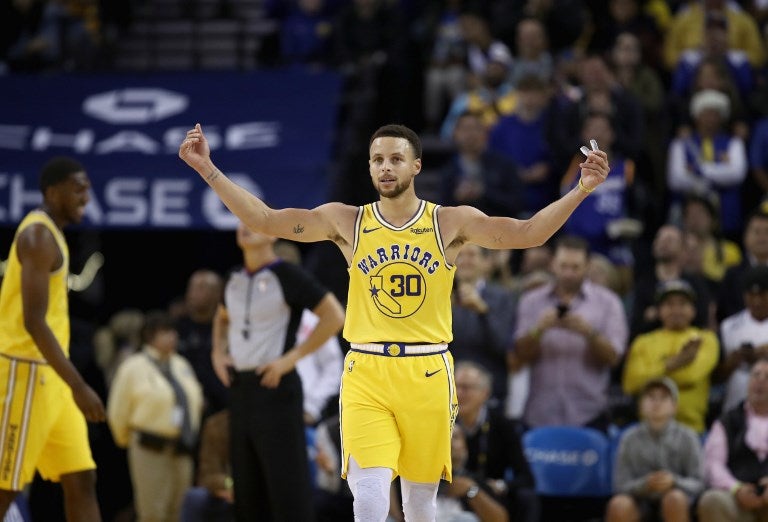 Stephen Curry #30 of the Golden State Warriors reacts during their game against the Washington Wizards at ORACLE Arena on October 24, 2018 in Oakland, California. Ezra Shaw/Getty Images/AFP

Golden State Warriors star Stephen Curry walked back his moon-walk skepticism Wednesday, saying he was joking when he suggested the lunar landings were a hoax.

“Obviously, I was joking when I was talking on the podcast,” Curry told ESPN on Wednesday, after his causal comments on the “Winging It” podcast sparked stratospheric reactions.

“I was silently protesting how stupid it was that people actually took that quote and made it law as, ‘Oh my God, he’s a fake-moon-landing truther’ whatever you want to call it, yada, yada, yada,” Curry said.

While Curry professed surprise that anyone took his conspiracy theory comments seriously, the two-time NBA Most Valuable Player said he will be happy to accept an invitation from NASA to tour the agency’s facilities, including the lunar lab at the Johnson Space Center in Houston.

“One thousand percent,” he said of accepting the offer. “I am definitely going to take (NASA) up on their offer. I am going to educate myself first hand on everything that NASA has done and shine a light on their tremendous work over the years.

“And hopefully people understand that education is power, informing yourself is power. For kids out there that hang on every word that we say, understand that you should not believe something just because somebody says it. You should do your homework and understand what you actually believe.”

Curry said he was surprised by the reaction to his remarks, made in casual conversation with teammate Andre Iguodala, Atlanta Hawks player Vince Carter and Kent Bazemore and co-host Annie Finberg — the topics ranging from dinosaurs to golf clubs.

“We ever been to the moon?” Curry asked, with several fellow guests answering “no”.

“They’re going to come get us, I don’t think so either,” Curry said, then added: “Sorry, I don’t want to start conspiracies.”