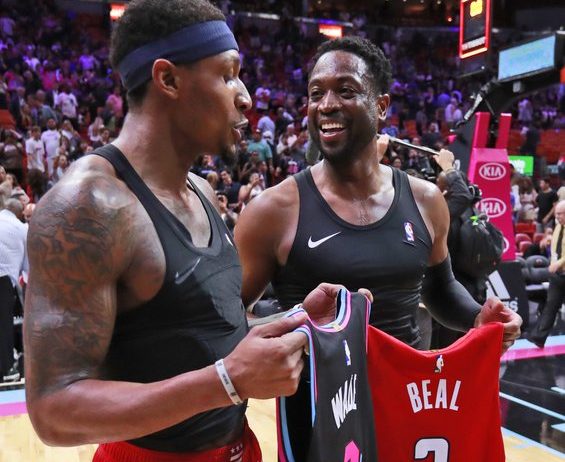 MIAMI — Bradley Beal has been keeping a secret from Dwyane Wade all of these years.

Beal wears No. 3 for one reason.

It’s a tribute to his idol.

After their 16th head-to-head meeting on Friday night — Miami beat Washington 115-109 — Beal finally summoned up the courage to let Wade know how he feels about his game, and acknowledged afterward that he was nervous when asking to exchange jerseys with the player who, not at all coincidentally, wears No. 3 for the Heat.

FEATURED STORIES
SPORTS
‘My family,’ Yanson says of Ceres-Negros after letting go of Southeast Asia’s current No. 1 club
SPORTS
LOOK: 2 Filipino visual artists part of NBA’s Vince Carter tribute
SPORTS
Snowboard world champion drowns in diving mishap
“I tried not to lose my mind when he first gave it to me because that’s unbelievable,” Beal said. “I’m trying not to be a fan, but I am a fan and I am a huge fan of his game. I try to predicate a little bit of my game off of his. This is probably the first time I’m actually saying that, but he’s a legend forever.”

Wade has been exchanging jerseys with players over the course of this, his 16th and final NBA season. Beal said he was nervous to ask Wade for his, for fear that the answer would be no.

Turns out, Wade wanted his jersey as well — and said he was deeply moved by Beal calling him an idol.

“Those moments mean everything,” Wade said. “Fan ovations are great, but to be able to have future players coming into this league and good players in this league, and to know you had an impact on their growth, that’s what you want. It meant a lot. When he said it, I thanked him and I hope I was good enough role model for him.”

Wade left Miami for basically 1 1/2 of his 16 NBA seasons, playing a year in Chicago before starting last season in Cleveland. Beal still considers him a Heat lifer, and indicated that he would like to follow along a similar path.

Beal could face Wade one more time: The Heat visit the Wizards on March 23.

“He’s one of the best to ever do it and he’s not cocky with it,” Beal said. “He does it in a humble way and he’s still able to do what he does at this age and it’s amazing. Everything he’s been through, people talk about him, but he’s still here. He’s still competing with the best of us and I have nothing but respect for him, his game, his legacy that he left.”