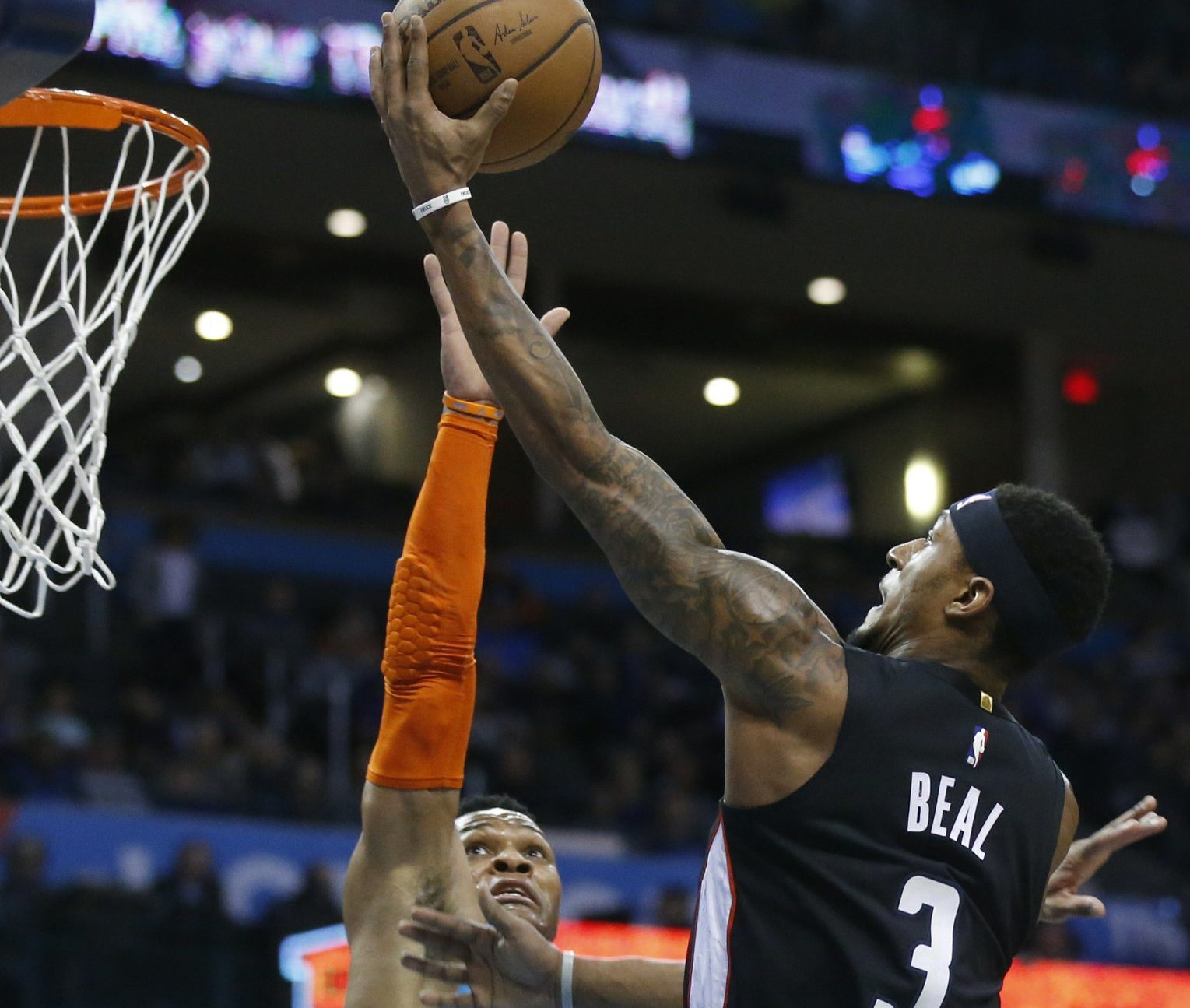 OKLAHOMA CITY — Washington coach Scott Brooks thinks his team delivered one of its best performances of the season on Sunday night.

That’s what it took for the Wizards to finally win in Oklahoma City.

Bradley Beal scored 25 points and Washington won 116-98, beating the Thunder franchise on the road for the first time since it was still based in Seattle.

The Thunder started the day with the second-best record in the Western Conference while Washington was nine games under .500 and still adjusting to losing star guard John Wall for the season. Those factors made the win sweeter for Brooks, the former Thunder coach.

“It has to be up there, there’s no question,” he said. “We battled. We played against one of the best teams in basketball. They’ve got a lot of talent. They’ve got three All-Stars on the floor and I think we battled them and did a lot of things well.”

Otto Porter had 20 points, six rebounds and five assists, Jeff Green scored 16 points and Tomas Satoransky added 15 for the Wizards, who had been 0-9 against the Thunder in Oklahoma City, where they moved in 2008.

Porter had been playing sparingly since coming back from a right knee contusion. He came off the bench and made 7 of 17 shots and 4 of 6 3-pointers.

Porter started every game he played the previous two seasons, but Brooks is considering keeping him in a reserve role.

“Otto just wants to play and play well and play the right way,” Brooks said. “If we keep him there for a while, who knows. But we have been playing some good basketball. I know we haven’t won every game, but we’ve been playing hard, and we have to keep doing it. But he has a nice rhythm coming off the bench the last few games.”

Russell Westbrook had 22 points, 15 rebounds and 13 assists for his 12th triple-double of the season and the 116th of his career. But he also had eight turnovers. Washington had nine as a team.

“We turned the ball over too much, at least I did,” Westbrook said. “That’s the story of the game.”

Paul George scored 20 points and Jerami Grant added 17 for the Thunder, who had won their previous three games.

The Wizards led 54-50 at halftime, but the Thunder quickly took a 55-54 lead in the third quarter on a layup by Grant.

Washington regained control. Porter’s 3-pointer capped a 15-2 run that put the Wizards up 80-69 with just under 3 minutes left in the third quarter. The Wizards led 90-79 at the end of the period.

Sam Dekker’s emphatic reverse dunk put the Wizards up 96-81 with about 10 minutes to play. A 3-pointer by Green pushed Washington’s lead to 20.

The Thunder don’t plan to dwell on the loss.

“I know we had right intentions and that’s all that matters,” Westbrook said. “We’ve got a positive locker room and I’m optimistic about what the future holds for this team, so it’s all good.”

Wizards: Brooks was cheered during pregame introductions. He coached the Thunder from 2008-15 and led them to the NBA Finals in 2012. … The Wizards outrebounded the Thunder 55-41. … George had scored 37 points in each of his previous two games, but he shot 7 for 18 on Sunday night. … Beal took 27 shots to get his 25 points. … F Trevor Ariza made just 1 of 9 shots.

The Thunder were outscored by 32 points during backup point guard Dennis Schroder’s 17 minutes. He scored nine points on 3-for-10 shooting.

Westbrook on the off night for the team: “Eighty-two games. You think you’re going to play good every night, you’ve got another thing coming.”