Andy Murray’s agony: ‘It’s so sore I even hate walking the dogs’ 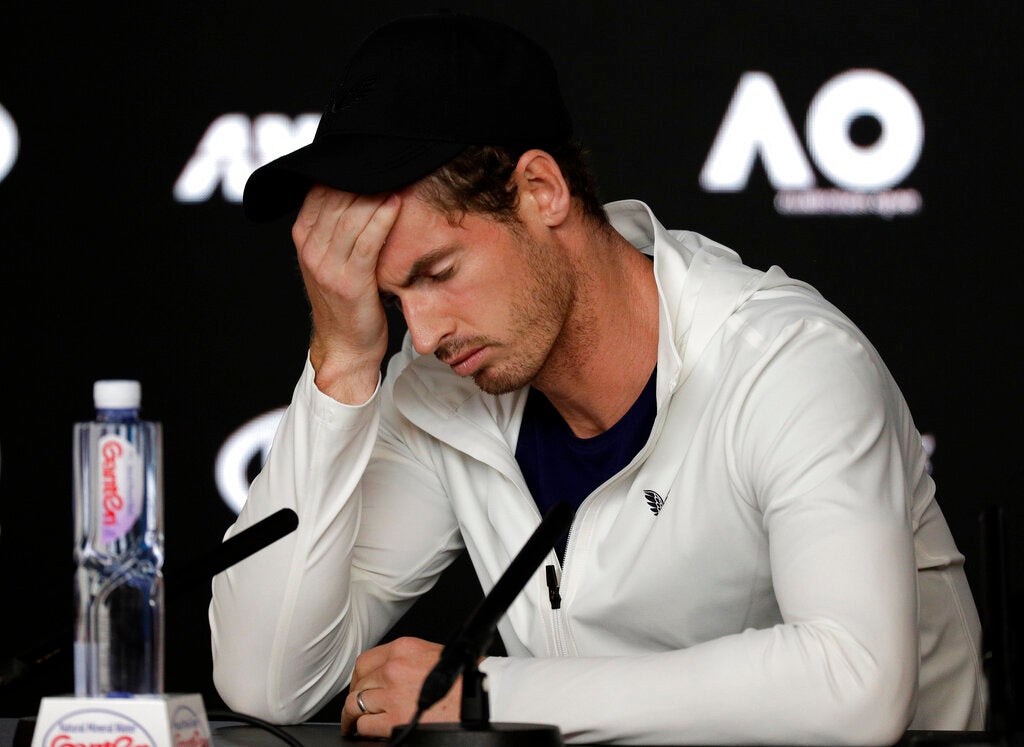 Andy Murray has opened up about the personal agony of his battered right hip after losing an epic Australian Open five-setter, saying he can’t even enjoy simple pleasures like walking his dogs.

The Scot fought to the bitter end in what could prove his final match before losing a four-hour thriller to 22nd seed Roberto Bautista Agut on Monday night.

He now faces a heart-wrenching dilemma — having to decide over the next week whether to battle on through the pain for an emotional farewell at Wimbledon or undergo major surgery knowing it may mean he can never play tennis again.

“I mean, I’ll probably decide in the next week or so. But that’s what I was saying the other day, that this might be my last match,” the 31-year-old three-time Grand Slam champion told a news conference in the early hours of Tuesday morning.

“If I go ahead with the operation and I don’t recover well from it, then I don’t play again,” added the Scot who has won two Wimbledons, a US Open, the Davis Cup and two Olympic golds in his storied career.

“I’m aware of that. That is the decision that I have to make.

“It will improve my quality of life, I’ll be in less pain doing just, you know, normal things like walking around and putting your shoes and socks on and things.”

The former world number one tried to describe his pain, which has become almost unbearable.

“Just now, like, going to walk my dogs, playing football with my friends, is like the worst thing I can think of doing,” he revealed.

“I hate it because it’s so sore and it’s uncomfortable.”

Murray said he would talk to his team, his surgeon John O’Donnell and other players who have had similar operations, such as American doubles great Bob Bryan, before making up his mind.

I trained ‘too hard’

“I just don’t really know yet. But, you know, if today was my last match, look, it was a brilliant way to finish, as well. That’s something that I’ll probably take into consideration.

“It was an amazing atmosphere. I literally gave everything that I had on the court, fought as best as I could, and performed a lot better than what I should have done without the amount I’ve been able to practice and train.

“I’d be okay with that being my last match.”

Murray added with a touch of poignancy that he would harbor some regrets if he was forced away from the game he loves.

“I practiced hard. I trained hard, probably too hard at certain stages in my career,” he said.

“That was something that I would change and do differently if I could go back,” added Murray, despite achievements such as becoming the first British man to win Wimbledon in 77 years and the first player to win two Olympic singles golds.

“Like some people have said the last few days, I got everything out of my game and stuff. But I feel like I should have done better, you know, I could have done things differently.

“There’s matches here, for example, that I would love to play again, have another opportunity to do that,” Murray said, referring to his record of reaching the Melbourne final five times but never lifting the trophy.

“But I have tried my best.”

Read Next
No guaranteed Round of 16 slot even if Azkals beat Kyrgyzstan
EDITORS' PICK
Villar Group gears up for AllValue Shopping Party on Dec. 3; around P 1-million promos and discounts up for grabs
A delightful blessing!
Legarda: Ending Violence Against Women, a cause for all
Gov’t eyeing COVID-19 vaccine booster for essential workers, indigents by Dec. 10
Omicron poses ‘very high’ global risk, countries must prepare–WHO
PH logs 665 new COVID-19 cases, lowest since July 2020
MOST READ
Quiboloy warns of ‘much worse than Omicron virus’ if his ‘persecution’ is not stopped
Bongbong Marcos’ conviction in tax case not a crime involving moral turpitude — lawyer
Omicron poses ‘very high’ global risk, countries must prepare–WHO
Marcoleta defends pol ads on ABS-CBN
Don't miss out on the latest news and information.