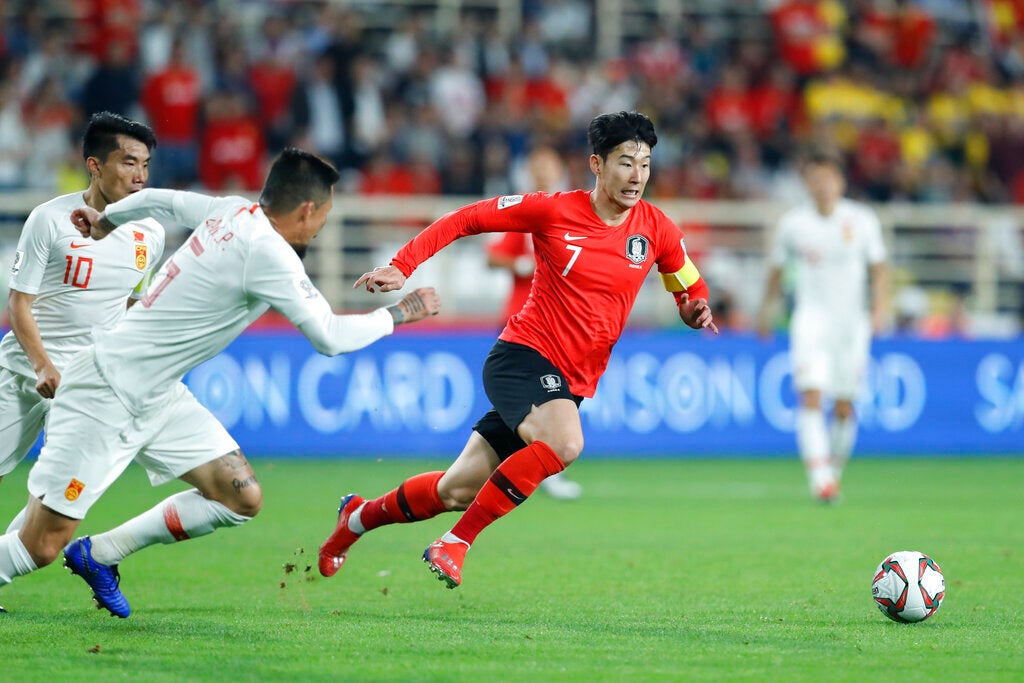 In his first game since arriving from Tottenham, Son earned a penalty and then assisted on his team’s second goal to help South Korea beat China 2-0 in Group C on Wednesday.

With both teams already qualified, South Korea dominated possession and bombarded China’s goal in a more confident performance than its dour 1-0 wins over the Philippines and Kyrgyzstan.

Son won the penalty in the 12th minute, his fleet footwork proving too much for Shi Ke to keep up with as the Chinese defender tripped him. Hwang Ui-jo took the penalty, shooting hard into the lower-left corner just past goalkeeper Yan Junling’s outstretched hand.

South Korea scored again in the 51st when Son’s corner was headed in by Kim Min-jae. It was the defender’s second goal in as many games.

Son is playing in his third international tournament in less than a year. After playing at the World Cup, Son missed the first part of the English season while playing for South Korea at the Asian Games. He led the team to the title, securing exemption from military service.

Son could be away for up to five of Tottenham’s matches in all competitions if South Korea reaches the Asian Cup final on Feb. 1.

Kyrgyzstan beat the Philippines 3-1 to finish third in Group C, getting a hat trick from Vitalij Lux.

Kyrgyzstan must wait for other results to find out if that’s enough for a place in the last 16.

ADVERTISEMENT
Read Next
Asian Cup: Stephan Schrock scores historic goal but PH Azkals bow out
EDITORS' PICK
Bong Go demands ‘fair reporting’ from ABS-CBN but will appeal to Duterte to save jobs
Mallorca City: Home of Cavite’s finest industrial hub
Wilder says costume wore him down before Fury did
Franchise of media giant to go on Guevarra tells senators
ABS-CBN apologizes to Duterte for 2016 election ad mess
Here’s How Protein and Calcium Deficiency Can Affect Your Kid’s Health
MOST READ
Dominguez: ABS-CBN account on unaired ads ‘does not tally’ with Duterte campaign experience
Jordan: ‘When Kobe Bryant died, a piece of me died’
Duterte: Set aside petty political differences to ensure Edsa legacy lives on
Lacson: For House to sit on pending bills ‘reeks of abdication’
Don't miss out on the latest news and information.