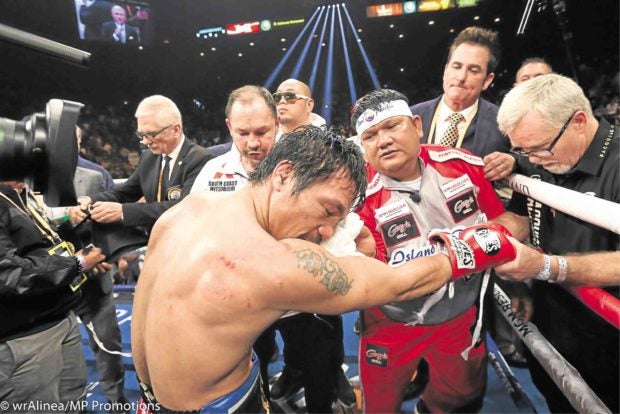 Fernandez said doctors have checked on Pacquiao after the eight-division champion complained of pain and partial loss of vision soon after he defeated Broner to keep his WBA belt at MGM Grand Arena.

“Broner was pressing his left glove on Manny and it rubbed on his eyes,” said best friend and chief trainer Fernandez in Filipino.

That triggered rumors that Pacquiao suffered a serious eye injury, like a detached retina which ended the career of Hall of Famer Sugar Ray Leonard in the 1980s.

“I saw Broner doing that (long stance with right hand loaded up) because he was trying to launch that [Juan Manuel] Marquez punch on Manny,” said Fernandez.  “Totally he (Broner) abandoned his jabs.”

That was when Fernandez warned Pacquiao to be cautious of Broner.

“The important thing is that our champion is safe,” added Fernandez.

International media reported that Pacquiao’s injury was caused by a devastating 1-2 punch from Broner.

Website www.nydailynews.com stated that “according to a member of Pacquiao’s camp who requested anonymity, the 40-year-old welterweight champ stayed up all night after the Broner bout playing chess, but complained of pain and vision loss in his left eye on Sunday morning.  ‘He told me it was like covering one eye with his hand,’ the source said.”

Another camp member agreed with Fernandez, telling the Daily News that the injury was relatively minor, a corneal scratch from the tape on one of Broner’s gloves—an injury Pacquiao has suffered in previous fights.

Yet another website, www.talksport.com, even suggested that Pacquiao may have to retire because of the injury.

“Everything seemed fine following the win on Saturday night, but Pacquiao woke up in great distress Sunday morning,” wrote talksport.com.

Observers also feared that no Pacquiao-Floyd Mayweather Jr. rematch would happen if indeed the Filipino’s eye is damaged.

Three years ago, the two fought in the “Fight of the Century” and  Pacquiao wants to avenge his loss.

He immediately challenged the unbeaten five-weight world champion Mayweather, 41, to a rematch after beating Broner.

The retired Mayweather was at ringside in Las Vegas.

In the post-fight press conference, Pacquiao was repeatedly asked about the rematch.