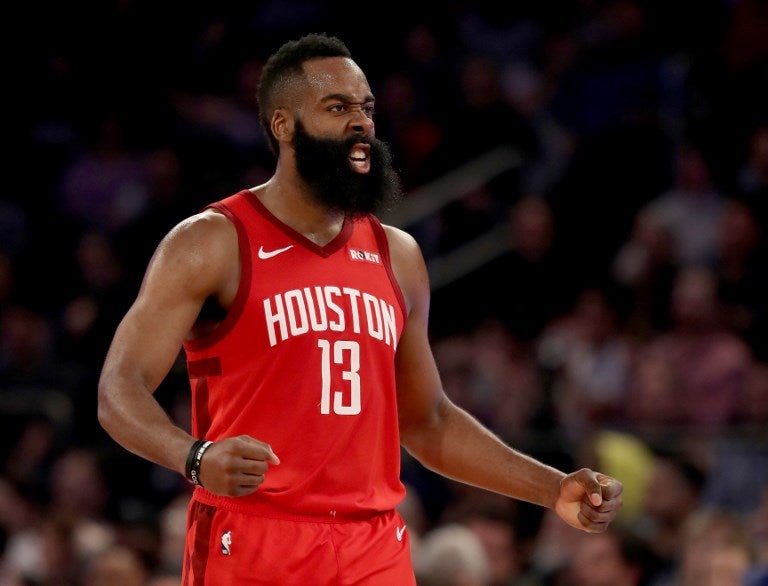 HOUSTON — James Harden scored 35 points for his 22nd straight game with 30 or more and the Houston Rockets never trailed and held off a late charge for a 121-119 win over the Toronto Raptors on Friday night.

After averaging 52.2 points over the last five games, capped by a franchise-record 61 in Wednesday’s win over the Knicks, Harden’s torrid scoring pace slowed a bit as all of Houston’s starters scored 10 points or more.

Eric Gordon led that group with 24, Kenneth Faried had 21, P.J. Tucker added 18 and Austin Rivers scored 13. Faried also had a season-high 14 rebounds and blocked two shots in his third game since signing with the Rockets to fill in with Clint Capela recovering from thumb surgery.

Houston led by 11 points after two free throws by Harden with 1:14 remaining before the Raptors made three straight 3-pointers to cut the lead to 121-119 with 27.3 remaining. Gordon missed a 3 to give the Raptors a chance, but Kawhi Leonard’s 3-point attempt was short.

It’s the 22nd straight game where Harden has led his team and Houston’s opponent in scoring, which moves him past Michael Jordan for the second-longest streak in NBA history behind Wilt Chamberlain, who did it in 40 in a row.

Harden’s stretch of 30-point games is the fourth-longest in league history, behind three streaks by Chamberlain of 25, 31 and 65 games. Harden was 15 of 15 on free throws, but struggled from long-range, shooting just 2 of 13 on 3-point attempts. The strong play of Faried gave Harden some much-needed help Friday and The Beard will get another reinforcement Sunday night when Chris Paul is expected to return after missing 17 games with a strained left hamstring.

The Raptors got 32 points from Leonard as they dropped their second straight.

The Rockets held a 7-point lead to start the fourth and pushed it to 10 before the Raptors scored five straight points, capped by a 3 from Norman Powell to get within 99-94 with about nine minutes left.

Houston then used a 9-0 run to extend the lead to 108-94 about three minutes later. Rivers made a 3 late in that span before Tucker capped it by grabbing a steal and finishing with a layup.

Toronto got within 10 after scoring four quick points later in the fourth, but a layup by Harden made it 117-105 with about 90 seconds left.

Houston led by as many as 22 early, but Toronto used a 41-point second quarter to cut the lead to 70-61 at halftime. The Raptors opened the third quarter with a 9-4 run to get within 4, but Houston followed with a 18-4 spurt, with nine points each from Harden, to push it to 92-74 with about four minutes left in the quarter.

The Raptors got back on track after that, scoring the next 10 points, with two 3-pointers from Danny Green, to cut the lead to 92-84 with about a minute left in the third.

Rockets: Brandon Knight missed his seventh straight game with a sore left knee, but is expected to return Sunday. … Houston made its first 20 free throws on Friday night before a miss by Faried with 7:55 left in the fourth quarter. The Rockets finished 29 of 33 from the line.